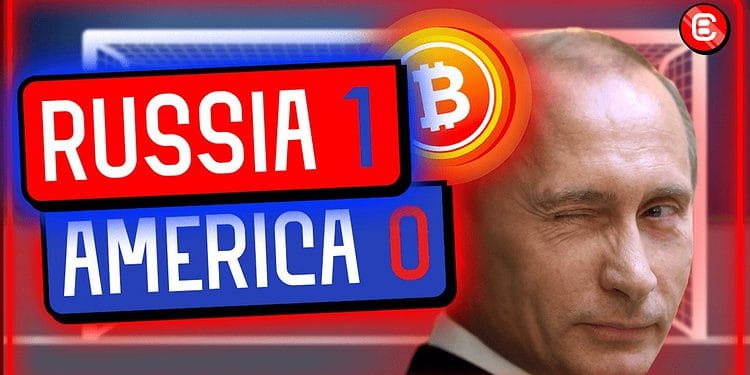 The past 24 hours has seen Crypto Twitter focusing on the Bitfinex saga: $3.6B worth of Bitcoin stolen from the exchange in a 2016 hack has finally been recovered… from some seriously weird perpetrators.

The past 24 hours has seen Crypto Twitter focusing on the Bitfinex saga: $3.6B worth of Bitcoin stolen from the exchange in a 2016 hack has finally been recovered… from some seriously weird perpetrators. It is big news, but it’s probably overshadowed one of the most important recent developments in the entire crypto space.

The biggest news of all has come from Russia.

Here’s what we know so far

There has been a lot of confusion in the Kremlin: on the one hand, the Central Bank of Russia was looking to implement a full-on ban. Meanwhile, the Ministry of Finance was seeking to regulate.

But now we have some clarity. If you speak fluent Russian, read all about it here.

In short, Russia will be legalizing and regulating crypto exchanges. Crucially, it will be treating cryptocurrencies as the name would suggest – currencies! However, transactions that exceed 600k Russian rubles (roughly $8k) have to be declared. Additionally, stringent Know Your Customer (KYC) will be widely enforced. But more will be revealed this month, as regulatory bodies are set to write up the first draft of the legislation no later than 18th February.

Why such a major deal?

In the US, crypto is treated (and taxed) as an asset, or property. It’s subject to capital gains tax. And this means it’s an accounting nightmare for any company looking to add it to its balance sheet. Why? Because it’s a lose/lose situation: When the value depreciates, unrealized losses are counted as losses, whereas unrealized gains are not counted as gains.

It’s worth noting, of course, that this is not akin to El Salvador’s decision to make Bitcoin legal tender. But by treating crypto as a currency, it opens the floodgates for institutions to hold it, giving a green light to domestic companies looking to build in the space.

Regulations give crypto companies and projects peace of mind, allowing them to navigate their home country’s laws and know where they stand as well as what they can legally do; how they can issue their governance tokens or even publicly market and advertise themselves.

In that context, it’s worth pointing out that, despite the regulatory uncertainty thus far, it has already achieved widespread adoption among citizens. It is estimated that Russians hold nearly $200bn dollars’ worth of crypto which equates to roughly 12% of today’s total crypto marketcap!

Those figures will likely only continue to increase in the light of recent announcements. Plus, Russia’s regional influence cannot not be overstated. Russia holds significant influence over its satellite countries and former Soviet nations, hence, the decisions they make could have a ripple effect, with the surrounding region likely to follow Russia’s lead.

Are we about to witness the Space Race 2.0?

Russia has made the first move, signaling that, unlike China (which finally “banned” crypto), it is willing to participate in, if not yet “fully embrace”, this disruptive financial technology.

Meanwhile, the United States is trying to establish its own position. And that’s because it doesn’t know what it thinks about this new technology.

At a federal level, skepticism remains high. The recent Infrastructure Bill contained a piece of legislation that, should it be introduced, could cripple domestic innovation, leading to uproar within the crypto space.

At a local level, on the other hand, we’re witnessing states like Florida, Texas and Wyoming leading a pro-crypto charge. Recently, the Governor of New York City began taking his salary in BTC!

Then, we have the Securities and Exchange Commission (SEC) chairman Gary Gensler. He was supposed to come in and be the knight in shining armor, providing helpful and constructive regulations. Instead, his reign has been typified by a complete lack of regulatory clarity.

Could we end up with a situation like this?

Just imagine. It’s possible, but if we know one thing, it’s that the US hates losing, especially to Russia.

If Russia continues along a pro-crypto stance, chances are high it will force the US’s hand, which could lead to accelerated growth prompted by regulatory clarity.

And China has been knocked out altogether.

Whilst everyone was worried about Bitcoin following a 3-month downtrend, in the background, the crypto world was still spinning. This is a major move by Russia that they would have been planning for a long time. So, remember that when things are looking grim, you just need to consider the macro fundamentals.

We are still early.