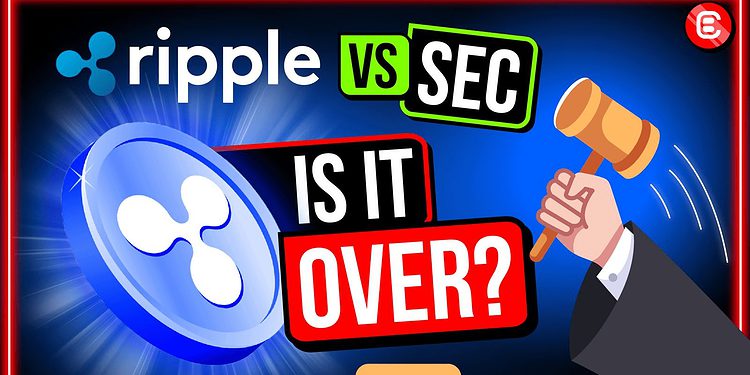 Former Securities and Exchange Commission (SEC) chairman Jay Clayton may have just become the most unlikely knight in shining armor for the Ripple community.

Former Securities and Exchange Commission (SEC) chairman Jay Clayton may have just become the most unlikely knight in shining armor for the Ripple community. A telling turn of phrase has the SEC cornered, and Ripple is in no mood to show them any mercy. What has been an arduous battle for Ripple and its long suffering community could be coming to an end.

The long running saga between Ripple and the SEC has the attention of the entire crypto community. The specifics of the case – and any potential rulings – could have wider implications across the entire cryptosphere.

In 2011 Ripple Labs and its cryptocurrency, XRP, launched. In 2015 it hired former Yahoo COO Brad Garlinghouse to develop its use-case. XRP went on to become a bridging currency for global money transfers. Some high profile partnerships with the likes of Santander followed, spurring a parabolic run in value from $0.01 to $3.

This is where the SEC barged in to spoil the party. Guess who led the SEC charge? Yip, Jay Clayton.

The SEC alleged that Ripple had released $1.3 billion of unlicensed securities, with the sole aim of enriching the founders. The price crashed, and the crypto world has kept a watchful eye on the case ever since.

Essentially, the case hinges on whether or not Ripple should be classified as a “security”, as defined by the law. If the SEC wins, then all digital currencies will be looking over their shoulders. The precedent set would send shockwaves throughout the sector.

A detailed timeline of events demonstrates how the SEC is attempting to draw the case out as long as possible, in a bid to force Ripple into submission. It is a tactic often used by the SEC, and it is no secret that the commission is funded by fines imposed on the institutions that it regulates.

The SEC has huffed and puffed, but still the Ripple house stays firmly intact. The SEC seems to have picked the wrong project to bully.

So what has changed? In a September 2018 SEC address delivered by then-chairman Jay Clayton (the guy who picked a fight with Ripple), he explains how “we” approach the evaluation of whether a digital asset is a security. The “we” he refers to includes himself, as chairman of the SEC and therefore the SEC itself, and Bill Hinman, former director of the corporate finance division of the SEC.

He then encourages people to look up Hinman’s 2018 speech on the SEC website. But why is “we” such a big word?  Jay Clayton uses the word “we”’ to explain his and Hinman’s approach to classifying digital assets as securities. The SEC’s argument that Hinman’s speech was just one man’s personal opinion is thus completely invalidated.

But why now? Both Hinman’s speech and Clayton’s address are from 2018. A report this week by Finance Feeds outlines the sequence of events that led the SEC to make an about turn on whether Hinman’s speech was a personal opinion or not.

Add in Ripple’s announcement yesterday that it has completed its buyback (more about that later), spurring the community to further research uncovering the 2018 speeches, and the links were made. The Ripple community is committed to the cause and will work tirelessly to establish any contradictions by the SEC. We need to read between the lines to fully understand the significance.

Surely the SEC wouldn’t be directing attention to a speech that would harm its ongoing case? Even SEC Commissioner Hester Pierce has directed an interviewer to Hinman’s speech.

Don’t take our word for it though. The crypto world has picked up on this and is banging the drum.

The SEC has tried to mitigate the 2018 Bill Hinman speech by arguing that it’s just one man’s personal opinion. Hinman signed an affidavit to that effect, thus making any documents pertaining to that speech “unprivileged information” (that legalese roughly translates to “he did not have permission to speak on behalf of the SEC”). In the process, the SEC now seems to be back-tracking and discrediting its own 2018 argument, which bolsters Ripple’s case.

In a very strange reversal, the SEC no longer wants to rely on – or share –  documents pertaining to the Hinman speech. James K. Filan reports in Finance Feeds that the SEC is desperately trying not to have to hand over the documents to Ripple.

The SEC is on the ropes, and the details surrounding the Hinman speech are potentially the key to finally drawing a line under the lawsuit.

Ripple has come out fighting. It has pushed the momentum forward by announcing a huge buyback that gives it a new US$15 billion valuation.

Following on from the new valuation comes a new price target of $1.

To add more fuel to the fire, the Fed has finally released its study on the formation of a digital dollar, and Ripple is clearly excited about how this would benefit the project, as well the entire digital asset community.

Although the case is by no means concluded, it would appear that Ripple can see some light at the end of the tunnel. Jay Clayton picked a fight with Ripple, hoping for it to roll over and pay a huge fine. The SEC never expected such a dogged fight. The sheer determination with which Ripple has approached the case is testament to Ripple and what it believes is right, as well as the conviction of the entire crypto space.

The irony is that Jay Clayton – the guy who started the fight – could end up being the savior that has delivered the telling blow in Ripple’s favor.