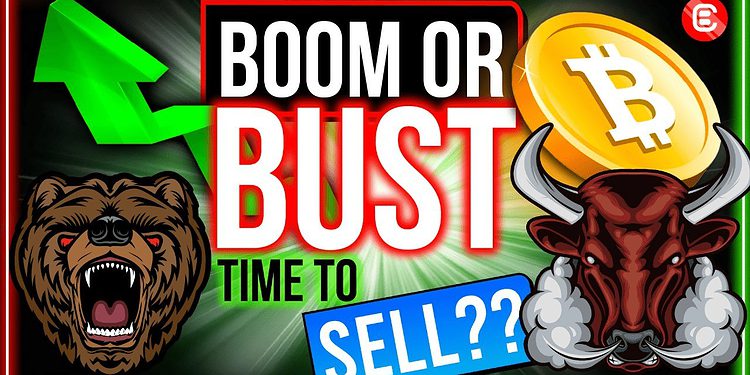 Risk vs reward: Why selling into the FUD is the mistake the smart money wants you to make!

Last month, we published an article about how flipping bearish (only) after a major correction made zero investment sense; how the time to be a bear was in November, when bitcoin was at 69k, the Fear and Greed Index was at Extreme Greed, and Crypto Twitter was calling for 220k by February.

Last month, we published an article about how flipping bearish (only) after a major correction made zero investment sense; how the time to be a bear was in November, when bitcoin was at 69k, the Fear and Greed Index was at Extreme Greed, and Crypto Twitter was calling for 220k by February.

Today, it makes no sense. Why? We’re well below $40k, and the risk-reward ratio is firmly in favor of the buyers, not the sellers. It might feel counterintuitive, but if you want to become a professional cyclist, you need to get comfortable being uncomfortable and learn not to get swept up in shifts in sentiment. Don’t be a sheep in bear’s clothing!

In a brilliant Twitter thread, TradeButWhy outlines a crucial point, and one that perfectly aligns with our thesis:

TradeButWhy goes on to suggest that “selling here is kind of stupid”. Whether or not prices fall further still is not the point. The point is that bitcoin is already down 60% from the November high: “There is no asymmetry left”. Selling now makes you a “late seller”, which means you’re either realizing a loss, or realizing gains that you’d be wise to cash in further down the line: the potential upside for HODLers (and buyers) is massive.

It’s a great way to frame it: Go with the numbers, not the emotions.

Which is exactly what the institutional players are doing. Do you think their trades are based on rationality, sentiment, or fallible human emotion?

Chris Burniske is one of the most respected voices in the space, and while he’s taken an unpopularly bearish stance for months, he’s beginning to sing a different tune:

Chris expects more pain in the short term, which is why he plans to accumulate throughout. It’s what an elite cyclist does: They get on their bikes at the bottom of the mountain in order to ride it to the top.

Three Arrows Capital’s Zhu Su is on a similar page: While he doesn’t discount the possibility of further downside in the near term, he seems to believe that the worst is categorically over, and that the upside from current levels massively outweighs any potential drawdowns.

The 2022 news cycle has had no shortage of major Fear, Uncertainty and Doubt (FUD) – high inflation, a hawkish Federal Reserve, the ongoing Russia/Ukraine conflict – but at times like these, it’s important to take a step back and focus on what the smart money is doing. And one thing it’s not doing, is selling.

The significance of the above chart cannot be understated, and it aligns with another piece we wrote earlier this month concerning Bitcoin’s changing risk profile amongst institutional players.

There’s no way to spin it: the fact that fund inflows have been bullish in a month like this speaks volumes, and perfectly aligns with what Zhu Su, Chris Burniske and TradeButWhy have all been saying in their different ways.

KPMG (Canada), one of the most risk-averse institutions in business, has put bitcoin on its corporate balance sheet! Meanwhile, Venture Capital (VC) money continues to pour into crypto and blockchain projects. Less than two months into 2022, and the amount of VC funding has almost outpaced the whole of 2020 and 2019 combined.

But what about the Russian elephant in the room?

Bitcoin’s risk profile may be changing, and VCs may be upping the ante, but in the meantime, equity and crypto markets are clearly at the behest of macro events, specifically the looming threat of conflict on the edges of Europe.

Has a potential invasion been priced in? We’d hazard to say: yes, it has. Just check out this fascinating Twitter thread showing market movements during previous military conflicts.

“Buy the invasion” may be a pretty tasteless term, but the chart illustrates a historical trend of markets clearly pricing in a conflict before it actually begins. Whether or not the Russia/Ukraine situation escalates further or a diplomatic solution is found, there’s a good chance that any further downside from a literal invasion would be short lived: in the mind of the market, it’s probably already happened.

Again, what does that tell us? The potential upside relief of de-escalation is likely to outweigh the drawdown of further aggression. When the mainstream press is telling you an invasion could be coming in the next few days (and you believe it), then it’s simply too late to sell on that basis: it’s just bad math!

A looming conflict is one thing, but what about the spiraling US economy? Again, we’ve covered this already, but it bears to remind the fearful: Rate hikes by no means automatically spell a bear market. For a forward-looking market, the idea of a rate hike is historically more bearish than the reality itself.

As Charlie Bilello continues, this isn’t to say “the same thing will happen today.” It just means that “one should try to be open to and prepared for multiple possible outcomes, including one in which the market rallies back to new highs in spite of the rate hikes”.

To return to the TradeButWhy thread, it’s time to think about time horizons and exposure: If you’re close to panic selling, ask yourself, why?

We wrote an article about why you SHOULD sell your crypto. And there are only 4 reasons:

Notice that FUD doesn’t come into it (unless it’s FUD caused by a rival blockchain technology which changes our thesis). And remember that paying for living expenses literally means the bare necessities (rent, bills, dental surgery) and not panic selling because you’re worried you won’t be able to afford that luxury watch if there’s another pullback! The truth is, if you’re selling crypto to make ends meet, then you’ve probably found yourself in a pinch by gaining too much exposure. If you’re panic selling based on emotions over short-term price action, you’ve definitely gained too much exposure, and are operating under a short-term time horizon! Thinking in terms of 3-5 years gives you the staying power you need to succeed in this space.

As TradeButWhy suggests, “If you’re depending on your portfolio, I’d argue the emotional r/r (risk/reward ratio) may be more important to you than the mathematical one”. And it’s emotional investors who don’t take profits when they should, and who sell when they shouldn’t. The mathematical investor does the opposite: takes profits in a methodical way, therefore has capital ready to deploy during dips, and is able to balance risk/reward ratios at times like these (whether it makes sense to sell, HODL, or double-down).

Right now, the math is clear. There is more reward than risk, and greater upside in being a bull than a bear. So, to sell now, under these conditions, means transferring assets from the inpatient to the patient.