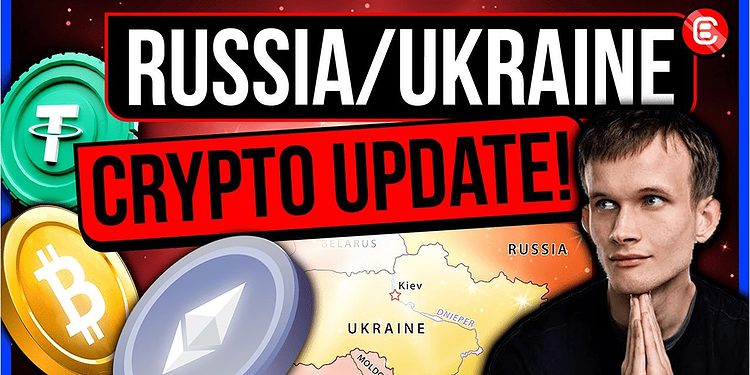 The situation between Russia, Ukraine and, by extension, the rest of the world continues to unfold, affecting all markets.

The situation between Russia, Ukraine and, by extension, the rest of the world continues to unfold, affecting all markets. That’s why we are going to ensure we give you regular updates on how the conflict is affecting the crypto markets specifically.

This is the first part in our new “Russia-Ukraine crypto update” series.

As tensions grow, geopolitical relationships are being put to the ultimate test, with Russia’s foreign minister stating that US-Russia relations are “reaching the point of no return”.

And following a video call to other EU leaders, in which he reportedly told them “this may be the last time you see me alive”, Ukrainian President, Vlodomir Zelensky, posted a video for the world to see, in which he says that himself and others are ready to defend their country from the front lines.

It has been a major talking point: Now, in an effort to undermine Russia’s leadership, European leaders have decided to ban Russia from SWIFT (Society for Worldwide Interbank Financial Telecommunication), the secure global messaging network that banks use to make cross-border payments.

These sanctions are intended to, amongst other effects, stop Russia from being able to access and spend their assets held in international reserves, which come in at approximately $630bn.

As a result of sanctions, Visa and MasterCard payment cards from Russian banks will be reduced to useless pieces of plastic, and will no longer function internationally until the sanctions are lifted.

Fears of a banking collapse are seeing Russian citizens flocking to ATMs to withdraw as much as they possibly can, causing massive queues around the country. Sberbank, the largest bank in Russia, has imposed a measly $20 withdrawal limit for its customers due to these bank runs.

During the course of the weekend, Bill Ackman had called for such a potential major bank run taking place on Monday.

The Russian ruble has been decimated, falling to its lowest level in history.

Overall, the Russian ruble has lost 73% of its value against the US dollar since its peak in 2008.

Russians buying USDT instead of USD

Centralized stablecoins, USDT and USDC, (as well as the algorithmically calculated and USD-pegged, decentralized UST) may be a better option for the citizens of Russia right now, compared to the US dollar, and definitely the ruble. Platforms with no KYC process might provide a potential on-ramp for Russians hoping to avoid a bank run, as well as guaranteeing cross border transfers.

As Ran put it:

Lex Moskovski even recommended that the Russian people buy USDT instead of US dollars, since there are no queues!

The Bank of Russia has more than doubled its interest rates, hiking them from 9.5% to 20%, the highest since 2017, in a desperate bid to stop the nation’s assets from taking a trip to the West, while incentivizing people to instead deposit more cash.

The drastic decision means that Russia is now offering an APY comparable to Anchor Protocol!

The battle for Kyiv continues

While Ukrainian forces have successfully held off Russian troops so far, Russia remains determined to take the capital of Ukraine, Kyiv, by force, with Altcoin Psycho suggesting such an event would trigger a liquidation cascade across crypto markets.

Russians are ditching their rubles more for bitcoin, as evidenced by the fact that the amount of bitcoin traded in rubles just reached a 9-month all-time high.

On February 26th, the government of Ukraine’s official Twitter posted Bitcoin and Ethereum addresses, asking for crypto donations to support their resistance efforts. So far, thousands of unique donations have raised over $19m in just a few days.

As of February 27th, the USD value of ETH and ERC-20 tokens donated to the official addresses surpassed the amount of BTC.

However, a disclaimer: the volume of ongoing donations is constantly changing the figures.

Gavin Wood is in the hood

Gavin Wood is keen to get involved, offering to personally donate $5 million worth of DOT if

Ethereum creator, Vitalik Buterin, has been open in his condemnation of Russia. On February 26th, he retweeted a UkraineDAO post and prompted his followers to donate

A whale donates to the cause

A single donor has transferred $1 million worth of bitcoin to help support Ukraine.

As tweeted by Binance CEO, CZ, the company has now donated $10 million to help the crisis in Ukraine.

What other influencers are saying

Scott Melker, aka The Wolf Of All Streets, put it well: that citizens caught up on both sides of the conflict need bitcoin!

Guy from Coinbureau also put things into perspective, advising world governments to follow in the footsteps of Ukraine and adopt crypto sooner than later.

He also points out an interesting contradiction:

It seems as if there’s nothing else going on in the global news cycle, which is why we’ll be bringing you daily updates for as long as this crisis continues.

The world is a scary place right now, and markets are rightly nervous. Nonetheless, our current working thesis is that risk-on is back on, and crucially, the case for decentralized money will emerge from this conflict stronger than ever.