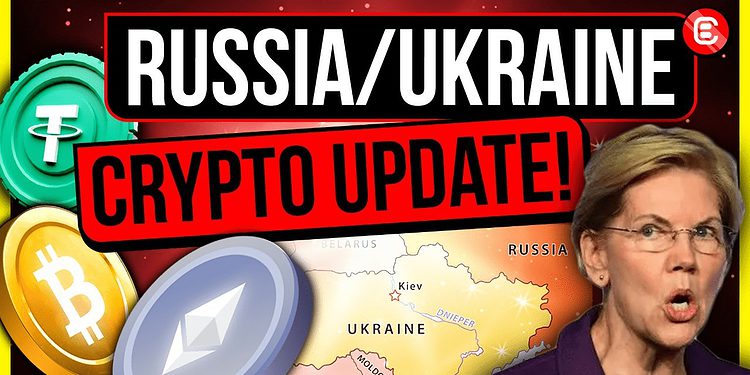 Relations between Russia and the West continue to unravel, and the situation in Ukraine is deteriorating by the day.

Relations between Russia and the West continue to unravel, and the situation in Ukraine is deteriorating by the day.

We continue to monitor the situation closely and bring you the latest news and updates on the crypto market.

Today, we’ll be taking a look at the fast-developing conflict (and global response), as well as how the wider crypto community is getting involved, coming together, and doing what it can to support Ukraine in its time of need.

This is the second installment in our Russia/Ukraine crypto update series.

The situation on the ground is escalating. In the past 24 hours, Russian missile strikes have hit the city of Kharkiv, while heavy artillery destroyed a military base in eastern Ukraine, killing 70 soldiers.

Nonetheless, the strength of the Ukrainian resistance continues, (we imagine) to the surprise of the Russian leadership, who may have underestimated the task at hand or not realized they were not just fighting an army – but a nation. Reports have been coming in of Russian troops surrendering (in return for clemency from Ukrainian forces).

US and European sanctions continue being discussed and extended.

Senator Chris Murphy has confirmed that the US intend to not only freeze Russian assets, but to actually seize them, which he believes Putin would not have anticipated.

Fear of asset seizure could be driving Bitcoin adoption amongst Russia’s elite: There has been a dramatic increase in bitcoin wallets holding over 1k bitcoin in the past 24 hours, with many speculating that the threat of sanctions has inspired Russian oligarchs to seek a safe haven.

Isn’t this good news for the market in the short term? Absolutely, but it could also be a potential disaster waiting to happen.

We’ll be monitoring this closely, but should Russian oligarchs (and government) begin adopting crypto as a means to avert and bypass Western sanctions, then a huge, unprecedented legislative crackdown could be on the cards.

We’ll be following this closely, of course, but we have to raise the possibility now.

Crypto-skeptics like Elizabeth Warren would likely be beyond thrilled to have an “enemy of the state” as a perfect scapegoat to drive anti-crypto legislation through.

Meanwhile, in Moscow, everyday Russian citizens are feeling the pinch too, as Google Pay and Apple Pay have stopped working on the Moscow Metro system, causing massive queues.

In lesser news, Putin has been subjected to a uniquely personal sanction: his Tae Kwon Do Black Belt has been stripped by the governing Tae Kwon Do body! Talk about below the belt!

On top of that, his superyacht was reportedly set off course by a hacker group.

With an excellent visual aid, Ian Bremmer points out some stark truths about Putin’s legacy:

Something extraordinary is happening.

The invasion of Ukraine has shocked and appalled the world.

And for the first time in a long time, the crypto community has been unanimous on something(!): namely, its genuine desire to help Ukraine resist the invasion.

The crypto space is full of rivalries; different factions supporting whatever their favorite project or protocol might be. And yet the space has been united.

The crypto community has donated millions to Ukraine’s official wallet addresses in just a few days.

Individual retail investors are getting involved, as are DAOs, as well as some of the leading exchanges.

Gavin Wood and the DOT community

FTX president Brett Harrison has set up a Ukraine.sol address to accumulate donations from the Solana community.

The Ukrainian Non-Government Organization (NGO), Come Back Alive, began its donations to the Ukrainian army in the second half of 2021, and has now raised $10 million worth of bitcoin. The majority of the funds were raised in the last few weeks.

Exchanges supporting the cause

On Saturday, crypto.com CEO, Kris Marszalek, tweeted that the company had donated $1 million to the Red Cross, urging their community and users to follow suit. Now we are seeing tweets asking the Ukrainian Red Cross to add crypto addresses for direct donations.

The crisis in Ukraine is a tragedy, and the crypto community is coming together to do what it can to help.

And it speaks to the ideals at the very heart of the crypto movement: freedom to transact, without censorship, third parties, or arbitrary borders.

Crypto is all about community. And sometimes they grow divided, but the strength of a project is rooted in its community.

A strong and vibrant community means greater network effects, which means that more users build new use cases, thereby strengthening the community further. It’s a self-fulfilling loop of long-term success. And usually, these communities are at war with one another (Polkadot and Ethereum), but right now, they seem to be reminded of what we’re all here for. And it certainly isn’t to fight one another.

If crypto becomes a hot political topic as a result of Russia’s adoption, then the crypto community will need to come together again to ensure a united front against haphazard US legislation!