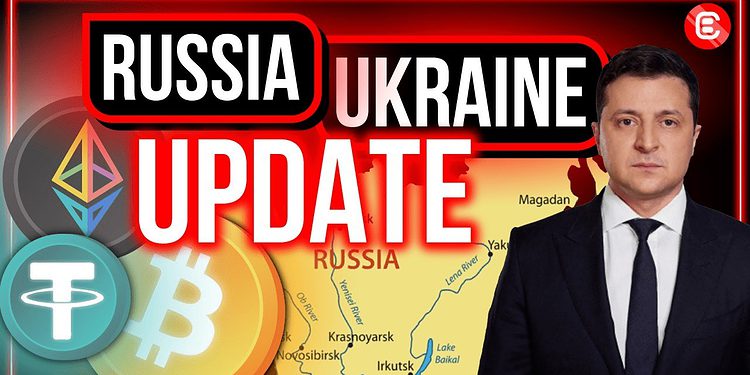 Today, we cover a recent assassination attempt on Ukraine’s president, as well as an incoming airdrop for all those who donated crypto to Ukraine.

The conflict between Russia and Ukraine continues to escalate. As promised, we are monitoring the situation closely, bringing you the latest news and updates that are affecting the crypto market.

Today, we cover a recent assassination attempt on Ukraine’s president, as well as an incoming airdrop for all those who donated crypto to Ukraine.

Ukraine’s President, Volodymyr Zelensky, has come out to say that almost 6,000 Russians have been killed during the conflict over the past six days of the war.

He went on to say that no missiles, bombs, tanks or strikes will be effective in taking Ukraine from its people, and stated that for the war Russia has declared on them, there will surely be an international tribunal to put Putin and the Russian government on trial.

News has also come out of an assassination attempt on Zelensky’s life in Kyiv. The National Security and Defence Council of Ukraine has stated that the attempt failed, and the assassins, an elite group of Kadyrovites, have been terminated.

The crypto community has come together yet again, making thousands of donations (amounting to millions in USD value) to the official Ukraine wallet addresses.

Ukraine is now showing its gratitude with an airdrop to all addresses that donated to the cause.

We have an article coming out later to cover what is a world first: an official government airdrop.

The Ukrainian Twitter account has also confirmed that Polkadot founder, Gavin Wood, lived up to his promise, donating $5m worth of DOT tokens to help fund Ukrainian resistance and humanitarian aid.

The raft of sanctions imposed on Russia has seen oligarchs rushing to liquidate their assets (before they can be seized or frozen), with Roman Abramovich (owner of Chelsea Football Club) selling his London assets and properties.

In Russia itself, Vladimir Putin has signed a decree prohibiting any Russian citizen from leaving the country with over $10,000 in foreign currency.

On Wednesday, Cenbank said that it would cease trading on the Moscow Exchange’s stock market. Meanwhile, the European arm of Russia’s largest bank, Sberbank, has been closed by the European Central Bank amidst fears of its treasury running dry, after huge numbers of people rushed to withdraw money from their accounts.

In the midst of all this, bitcoin has now hit a new all-time high against the Russian ruble.

There has been a lot of speculation surrounding the Russian government’s possible use of crypto to evade international sanctions.

In a detailed thread, Asheesh Birla explains why this may be easier said than done.

And it makes us wonder… Are privacy tokens and protocols about to find themselves thrust into the spotlight?

At present, the rush to Bitcoin as a safe haven asset has clearly pumped the price, but as the conflict continues, markets across the board could see some downside as the scale of war and its geopolitical consequences continue to affect global economies.

We will continue to do our research and find the latest data for you as the conflict persists. In the meantime, our thoughts are with all the innocent souls lost to this tragedy.