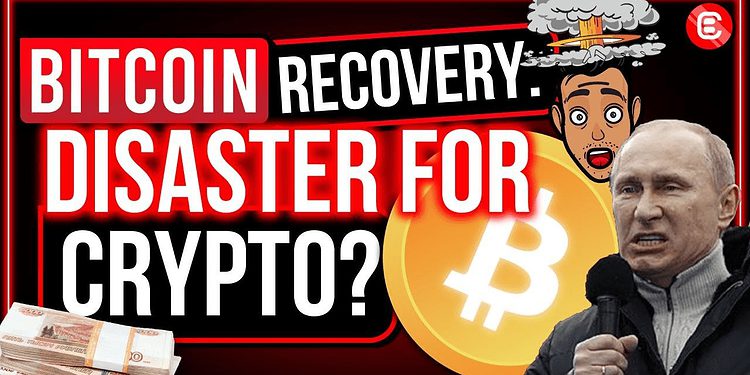 Russian oligarchs lead the market recovery, and the consequences could be serious

Yesterday brought us a 15% Bitcoin rally that amounted to the largest daily (green!) candle in a year, bringing some much-needed cheer to the markets.

Yesterday brought us a 15% Bitcoin rally that amounted to the largest daily (green!) candle in a year, bringing some much-needed cheer to the markets.

Twitter has flipped bullish again. “I told you so” has become the term of the day.

The markets appear to have come to terms with inflation, especially since aggressive interest rate hikes are increasingly unlikely.

The fact that the West is clearly unwilling to engage in a military conflict has provided some reassurance.

And demand for crypto is back in a serious way. Sentiment has done a 180-degree U-turn.

Exciting as that is, let’s not get ahead of ourselves.

The buyers are back, Bitcoin posts its biggest daily move in months to recapture the $40k+ zone.

The move happened quickly, decisively, and with significant volume, signifying that there is an underlying bid to the market.

On top of that, bitcoin has finally, definitively decoupled from the NASDAQ and the S&P 500, exaaaactly as we were predicting it would.

Is it only blue skies ahead?

After all, it was the correlation to traditional markets that seemed to be weighing bitcoin down, ever since the inflation (and hawkish Federal Reserve) narrative began back in November.

Any high-leveraged shorters might be quaking in their boots right now.

When bitcoin broke $44k, liquidations took out $305 million in under a day.

If we break $46k, then all bets are off, and a short squeeze could drive bitcoin back towards the $50k region.

So, with all that said…

Bitcoin is back. Long may it continue.

But who is buying?

In short, Russians. And very rich ones at that.

Yesterday, we saw a massive spike in the number of BTC addresses holding 1,000+ BTC.

While only the exchanges themselves could confirm the geolocation of these buys, it seems almost certain that it’s the Russian elite (oligarchs!) who’ve been piling into bitcoin as a safe-haven bid in order to protect their assets from foreign intervention.

This isn’t mere speculation, because BTC is trading at a 50% premium on Russian P2P exchanges, proving that demand is outpacing supply, and driving prices to pretty insane levels.

Great news? Bad news? Which one is it?

However, this could prove to be a double-edged sword, with long-term implications which could change the course of global crypto adoption for years to come.

If Russian money is using BTC to bypass sanctions imposed by the EU and US, the consequences could be potentially devastating in the long term.

Crypto has had to overcome a huge amount of bad press, for years, to eradicate the misconception that it is only used for illicit activities.

For the Elizabeth Warrens of this world, Russian money could be the ultimate pretext to serve up some truly devastating legislation – and possibly without sufficient due process.

Already, we’re seeing President Biden leaning on exchanges. And that could be just the beginning.

On the one hand, we’re seeing the West declaring economic war against Russia, and on the other, Russian money could end up flooding into crypto assets.

Which is its own unique form of economic retaliation.

Suddenly, Bitcoin could find itself at the center of a geopolitical storm, the result of which could easily be a rapid extension of supervisory and regulatory control.

And yet, we also see how crypto is serving the victims of war. The Ukrainian government has received millions in crypto donations in just a few days, from all over the world, helping to fund its resistance campaign.

Ukrainian refugees are able to store and transport their wealth across borders.

We’re also seeing how the crypto community has united, and found a way to make a tangible impact while the rest of the world sits by and watches.

Ryan Selkis put it so well.

Yes, Russian money may evade sanctions with bitcoin, but guess what, it will always find a way.

So, we mustn’t allow regulators and heavy-handed politicians to reframe the narrative, as they surely will attempt to do.

Other reasons for the pump?

The catalyst for yesterday’s rally may well be attributed to Russian oligarchs, but as we’ve been saying since the invasion began, the markets were primed and ready for an upwards move.

However, buy pressure from the Russian elite may have been the catalyst the market needed.

It could also provides the catalyst the US elite needs to crack down.

The bottom line is, however much US and European regulators might want to crack down, it’s impossible to control who buys Bitcoin.

And therein lies its power.

A power well worth defending.

We’ve been calling for a market recovery for around a week. And it’s panning out. The move higher was the culmination of several factors that had been developing. We expected the bull cycle to resume. All the indicators were there and a plan was in place.

However, we have to be prepared for the unintended consequences.

We’re not saying any of this will happen, only that it could. We must remain vigilant to the possibility.

Whilst the case for the new bullish cycle remains intact, we’ll be following the political fallout of Russian money embracing Bitcoin with a close and careful eye.