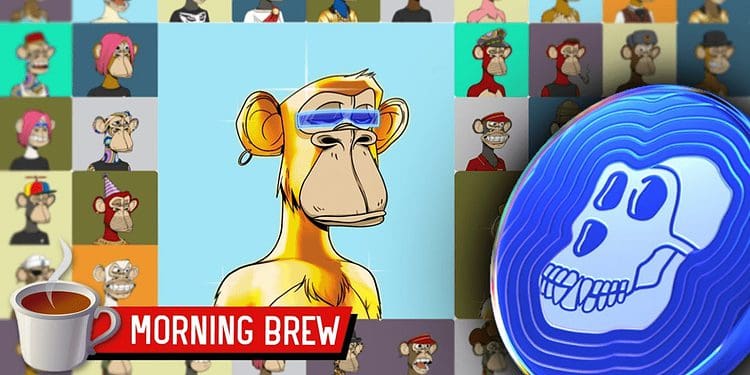 Some investors are going to get absolutely REKT

All that, and more!

Non-fungible tokens (NFT) have been struggling of late, with floor prices and volume on a steady decline. However, one project’s success continues, now boosted by a major development backed by some of the most prominent names in crypto.

The Bored Yacht Ape Club (BAYC) hype train is not slowing down: ApeCoin has been going bananas, breaching $18 this morning.

Most original BAYC buyers were likely millionaires (on paper) with the release of ApeCoin (APE) yesterday. The original mint price for a Bored Ape was 0.08 ETH, or $200, and the current floor price sits at 89 ETH. So, if you held an ape through the Mutant Ape Yacht Club (MAYC) airdrop, Bored Ape Kennel Club (BAKC) airdrop, and not including the launch of ApeCoin (APE), you’d be sitting on a hefty 151 ETH – a 189,688% return, which makes a Bored Ape one of the best investments in history. And that’s just the floor price.

BAYC or Bored Yacht Ape Club highlights the importance of creating an ecosystem around a project. The phenomenon now hosts a metaverse, DAO, and a financial market with the recent release of ApeCoin. The project focuses on decentralization and web3 growth. Similar projects that began as .jpegs are likely valued near-zero today, after markets started to see a de-risking across assets early in the year. APE can be traded on any major exchange.

To read more on BAYC and ApeCoin (APE), check out Crypto Banter’s coverage on the project.

Yesterday, bitcoin (BTC) remained steady in the wake of the Federal Open Market Committee (FOMC) meeting on Wednesday. Traders will battle out the price until the weekly options and futures expiration are settled today. The max pain, the price at which the most traders lose their bets, sits at $39k. Typically, max pain attracts price near expiration while bulls and bears struggle to keep the odds in their favor. See the chart below.

Will Clemente of Blockware Intelligence notes supply shock ratios are going vertical on bitcoin on-chain analysis. Clemente highlights “supply continues to get absorbed by entities with a low statistical history of spending their BTC.”

Blockchain technology has opened the door to an endless amount of creativity. Out of it have come currencies, NFTs, DAOs and metaverses. BAYC and ApeCoin could prove a touchstone towards a decentralized culture, and with his proposal, Dominic Williams adds value to unbiased information that can help shape the outcome of a war. The power of blockchain is becoming clearer than ever.

Thanks for reading. Enjoy your weekend!