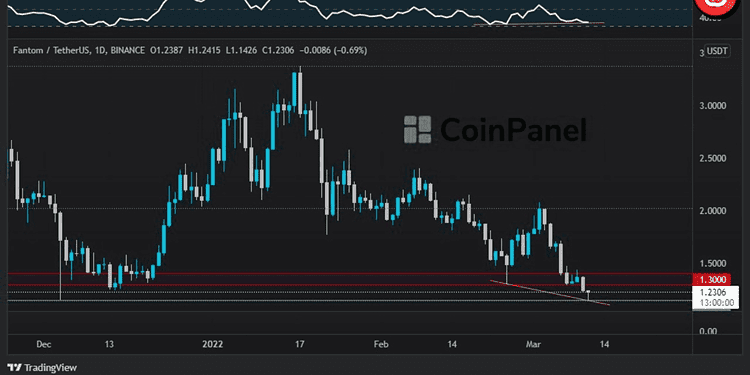 Sometimes the ugliest charts are also the most beautiful

Yesterday, Fantom (FTM) broke the major $1.30 support and has come down to test the next important support level at $1.15.

Yesterday, Fantom (FTM) broke the major $1.30 support and has come down to test the next important support level at $1.15. Currently, the price is trading at $1.20, with a small bullish divergence on the daily chart.

In the next couple of days, we should see the price move back up to retest the $1.30 level, which is now acting as a major resistance. If the market can start becoming more bullish in the next week, we could hopefully see a support/resistance flip back above the $1.30 level, but that is far too early to call now. There is also the possibility that we are going to stay range-bound for now, between $1.15 and $1.30. We do not want to see a break of the $1.15 support level, as the next level of support will be at $0.95 to $1.00.

Nothing dramatic has changed in the Fantom project, except for the key developer (Andre Cronje) deciding to leave. They still have a massive team behind the project. Fundamentally, the Layer-1 project is still very strong, and moving forward at a great pace, so try not to pay attention to all the Fantom fear, uncertainty, and doubt (FUD) going around right now.