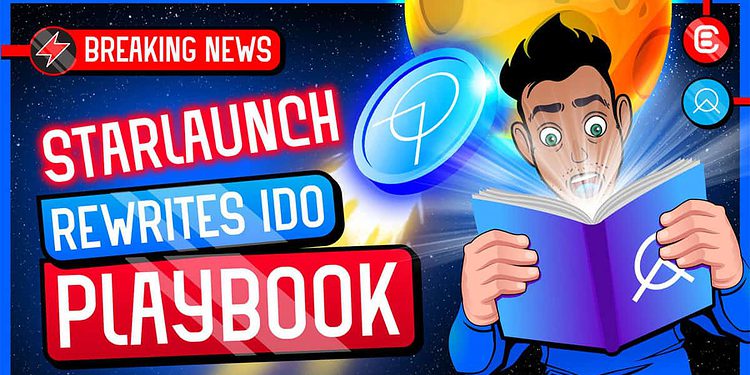 It’s smart tokenomics, but not as we know it Jim. Here’s how Starlaunch’s deflationary staking model, kicking off with the MonkeyBall IDO this week, is revolutionizing the launchpad IDO model.

Since StarLaunch completed its token generation event (TGE) in early November, those lucky enough (including 50 Banter community members) to get in at IDO level of under 7c a token, have had the chance to ride it to an insane pump of $23, for a ridiculous 300x gain. Yes, that’s $400 turned into about $130,000 if you HODLed like we said you should.

StarLaunch, whose team also developed the wildly popular CardStarter launchpad on the Cardano blockchain, is the first insured IDO launchpad on Solana, and has pioneered an innovative, bi-token system that includes both a deflationary governance token ($STARS) and a secondary utility token, Hydrazine (N2H4).

It is specifically Hydrazine and its ability to help ordinary degen investors get into some of the hottest IDOs that has investors salivating and helped $TARS to soar to such crazy highs.

The two tokens will work in tandem to help grant access to future IDOs hosted by StarLaunch, such as MonkeyBall, their triple-A-rated flagship IDO game that features turn-based soccer matches.

$STARS has introduced a revolutionary new tokenomics element that is currently giving it the edge over other launchpad tokens. The Solana launchpad gives $STARS owners the option to stake their assets, by either locking it for 90 days or not.

The unique deflationary mechanism causes $STARS to decay (half-life of 90 days) if not placed into the Fusion Vault, which prevents decay by staking the token for 90 days. Staking then produces Hydrazine, the secondary token that allows access to StarLaunch IDOs.

Hydrazine allows contributors to get a seat on vetted Solana projects launched on the platform and grants an equal proportion of the IDO token (in this case $MBS) of the pool.  If someone who is staking $STARS doesn’t wish to participate in an IDO, they can still rake in massive profits by selling their Hydrazine that’s generated from the vault.

There is a huge incentive to keep $STARS staked in the Fusion Vault, as this is the only way to generate the secondary token used for IDOs. While Hydrazine can also be purchased on the open market, it’s likely going

The $STARS token is set for a bullish future if its platform can continue to attract and introduce quality projects. It’s quite clear that StarLaunch has taken a careful audit of the current IDO launchpad model,. The company will have looked at the performance of CardStarter, which topped out at $80 and currently hovers around $9, analyzed how to improve on this, and then added a unique twist to ensure longevity that should soon be adopted by competitors.

By decaying staked unlocked $STARS used to generate N2H4, thus reducing the supply of their governance token, they’re forcing savvy investors to simply bite the bullet and lock up their $STARS (which should appreciate in value). That should add further fuel to the token’s supply shock and increase in value.

This will also minimize negative price volatility, as the 90-day lock up period essentially turns $STARS owners into early investors, instead of traders looking to dump after a successful IDO like MonkeyBall has concluded.

While it’s possible that speculators will dump $STARS post-IDO, this is less profitable because of the decay $STARS receive outside of the vault. Users are much more likely to purchase $STARS, stake them for rewards, and then contribute those rewards to new projects on the launchpad to likely go even further into the profit zone.

Future projects taking flight on StarLaunch are thus more likely to knock it out of the park, because their tokenomics are created to incentivize $STARS holders to keep locking their assets and, in doing so, keep earning Hydrazine for IDO contributions.