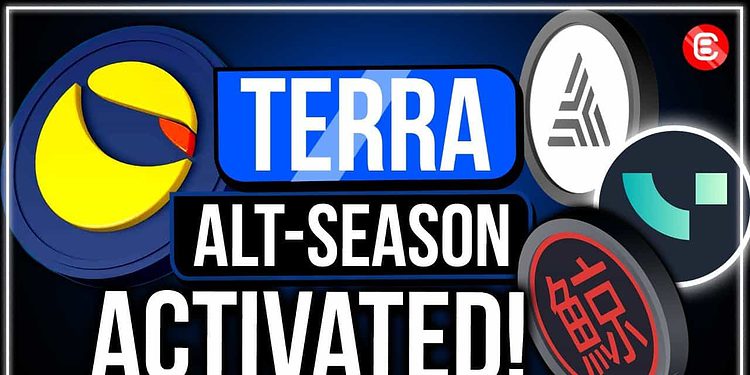 Terra is having its very own alt-season. Here’s why

After months of drawdown, we finally saw some positive price action with alts in the Terra ecosystem.

After months of drawdown, we finally saw some positive price action with alts in the Terra ecosystem. This article will go briefly into the details on the possible factors alongside the updates launched across the space this week.

I may have posted this one day too late eh?

The team has made some announcements regarding refining their borrowing model, the onboarding of more collateral assets and the new tokenomic (ve) changes in V2.

➡ The new integration of retaining yield and harvesting interest payments through onboarding compound liquid staking derivatives means that the users’ collateral assets will appreciate over time like aUST. Borrowers will retain their upside yields, and the interest will accrue at the base borrow rate and average-weighted staking reward percentage for the chosen collateral type, paid in UST.

➡ bATOM and SOL are in the auditing phase, with new Anchor Borrow collateral assets underway. Dropping LUNA dominance in Anchor Collateral and opening the doors to more assets will increase protocol utilization and gradual exposure to UST — decentralized money.

bETH alone has captured more than 700 million dollars’ worth of collateral alone.

We will also see quicker integration with V2, as the new collateral types in the near-future can be added via governance voting.

➡ Maximum loan-to-value ratio raised to 80% (poll-15). Much less the degens, but this will also encourage users with (lower-risk tolerance) to partake in borrowing. The risk of liquidation cascades is also alleviated with the help of builders on the Terra Network, to name a few: Kujira, Lighthouse, Terra ToolBox. Do take note that the language has changed, and the new Anchor Borrow percentage is representative of your maximum borrowable amount (max capped at 75%).

➡ veANC (Vote-Escrowed ANC) is proposed as the new token for boosting voting power in Anchor Governance. This new staking model will enable users to lock ANC for a period of 1–4 years to receive increased voting power and boosted ANC emissions in the form of subsidies to the borrow rate. The longer the lock-up period, the higher the voting power and ANC distribution (reducing ANC available in the market to sell).

Prism enables users to split LUNA into principle (pLUNA) and yield (yLUNA), which is also known as ‘refracting’.

Due to yLUNA’s allowance for users to get staking rewards and airdrops, there have been huge debates on which of the two is worth more in terms of holding. However, pLUNA also acts as a huge bet on arb opportunities — others will need to buy the more expensive pLUNA from remaining supply or wait for new refracts to be able to merge it back to cLUNA.

Otherwise, users can also provide liquidity in the LPs.

It is pretty amazing how Prism managed to generate high APRs purely off protocol revenue without any inflation (yet). Gentle reminder, their PRISM FARM event is now live:

By bonding on the platform with sKUJI (staked derivative of KUJI), KUJI stakers will now earn a share from the range of tokens generated across both Kujira platforms ORCA & BELUGA.

As bLUNA, bETH, aUST and more collateral assets like e.g. bSOL, bATOM are added, the pool will grow in size through fees earned from users on the platforms. This means that stakers will receive a proportionate amount of rewards from these assets based on their sKUJI ownership. It also almost works like a dollar-cost average (DCA) strategy for these assets, as you are constantly accruing/redeeming them.

This means that users will not only get incentives in terms of market value when they sell, but also these assets from their prior staking — somewhat like a liquid treasury to reward long-term stakers.

There is a 24-hour unbonding period for the tokens to prevent potential trading abuse.

Suberra aims to be the one-stop solution for payroll and payment streams. The protocol will allow users to automate payments for their subscriptions or any other recurring payments — or even possibly via your aUST yields from Anchor’s approximate 19.5%!

The first time this plan was announced was when Pylon Protocol brought up the roadmap, but it seems like Suberra may just bring it to us on Terra first.

They have implemented some new upgrades for their features in V2:

There is now support for mobile and Ledger, an option for users to specify how many times he/she wants to repeat the transfer, and any prior bug issues from V1 have been fixed. Try out the beta here: https://app.beta.suberra.io/

The prime gal from TeFi alpha is finally here

Applied for the whitelist — Does this mean that physical cards will be shipped out soon?

As we all know, DeFi liquidity is extremely centered around USD-denominated stablecoins. However, there are also multiple other stablecoins on Terra like $MNT, $SGT and $KRT.

Vertex aims to bridge the gaps between multi-currency users and the multi-stablecoin markets. They will provide trading instruments meant to integrate efficient applications and utility for the broader market of stablecoins. This is particularly useful for speculation and as a starting point for users who are more comfortable with their own native stablecoins in DeFi.

Their testnet is live, btw.

They will have a token called $VTX — operating as a governance token, of which protocol revenue will go towards its stakers as well.

Similar to Mirror, Vertex will operate under a setting where entities cannot cap the growth of a protocol or vice-versa, especially when there is a motivated community that wants to see the app succeed. Vertex will remove traditional FX intermediaries and allow users to earn yield even on non-UST stablecoins.

The idea of trading your Galactic Punk for the desired LunaBull, or taking up loans based on the value of your NFTs, have been hot topics for months ever since launch.

Illiquidly aims to bring those ideas to fruition on Terra. Here’s a small graphic made by them to denote how early we are in the NFT space.

Here are some functions they plan to make available to users:

The Marketplace will soon operate on a DAO governance system where all stakers of the LUART token will have the right to vote and approve the project to be launched ultimately — after the basic team vetting has been done.

Additionally, they will be bringing bidding features live soon.

Feel free to add the TeFi calendar into your Google Calendar here: https://www.speicherx.com/tefi-calendar

Feel free to join any of the Terra community groups I have created:

This article was contributed by speicherx