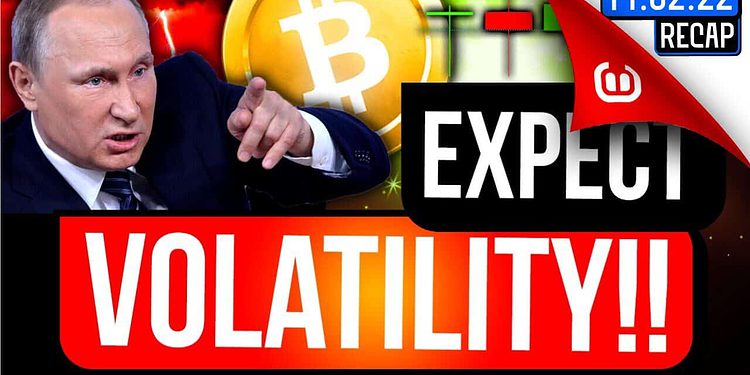 Following reports of a potential conflict, in addition to the Federal Reserve’s forthcoming emergency meeting on Monday, the crypto market has been in a state of panic and uncertainty.

Following reports of a potential conflict, in addition to the Federal Reserve’s forthcoming emergency meeting on Monday, the crypto market has been in a state of panic and uncertainty.

With the low and steadily dropping volume, it’s likely that volume will re-enter the market at some point soon, and a large move can be expected. Faced with the forthcoming volatility, Sheldon looks at the most important price levels to watch so that you can better prepare for the upcoming storm!

The $46k – $47k resistance region had a lot of sell walls, so it’s no surprise that Bitcoin was rejected there. What’s interesting, however, is that Bitcoin is still holding trend despite market fear, uncertainty and doubt (FUD) revolving around a possible war breaking out.

The stochastic Relative Strength Indexes (RSI) indicated that Bitcoin was overbought, and that a reset, which would drive Bitcoin back up to trend support, was imminent. Right now, the only question is how much of an impact a potential war would have on the market, and how far lower can we go.

The USTech100 is up 1% from its recent low daily close on January 25th, while Bitcoin is up 33% from its daily close low on the same day.

Gold is up 4.5% from its low, indicating a shift in market perception as Bitcoin decouples from the stock market, and transitions into a store of value similar to gold, but one which performs better.

The key levels to watch out for

Bitcoin has nailed the higher high and is now retesting trend support, which explains why Bitcoin has been moving sideways while the overall market has been rather quiet.

Bitcoin is the only guardian angel as the market gets uninteresting once more.  In these uncertain times, investors will be looking for safe havens to invest in, which is why Bitcoin’s dominance is exploding, demonstrating that Bitcoin has investors’ trust, whereas altcoins don’t at the moment.

Human emotions are reflected on charts, and the Bitcoin dominance revealed that there was a Bitcoin solo performance a few weeks ago. Therefore, if the decoupling from the stock market is successful with all this the war FUD, Bitcoin might do even better as investors and people begin to regard it as a country-neutral currency, digital asset and store of value.

However, it is possible that the crypto market as a whole, rather than simply Bitcoin, benefits from the prolonged tension, implying that altcoins will catch up. If altcoins catch up, Bitcoin dominance will most certainly reach a yield point of approximately 45%, which is only 2% away.

The last time Bitcoin dominance was in a downtrend, it made a lower low, indicating that the high on this run is restricted, and that it will make a lower high (in comparison to the previous high of 48%) before another leg down.

It’s also worth noting that Bitcoin dominance and Bitcoin ride solo are not the same thing. Bitcoin usually rallies 50% or more when dominance starts to break key levels, but it’s only up 33% from its lows, implying that the price movement isn’t quite there yet, and that dominance could range for a while.

The USDT dominance has made a large bounce off trend line support, which is a result of how quickly it accelerated to the downside. However, this could indicate that the bounce is a merely a dead cat bounce, with the next leg down breaking the support trend.

The USDT dominance bounce is a good buying opportunity for altcoins, and a possible rally from altcoins will see a macro pullback in Bitcoin dominance, eventually leading to a USDT dominance crash as people sell out of stablecoins and return to the market, which could see altcoins run in a bid to catch up with Bitcoin.

Is it time to cash in your altcoins for Bitcoin?

Traders have changed their minds about which coin to invest in, especially now that Bitcoin is pounding it with a lot of strength.

You’ve missed the boat! The greatest time to buy Bitcoin was around the dominance main horizontal support test, because the entire market was down and Bitcoin was needed to lead the pack and save the day.

Bitcoin has successfully led by example, and could be holding strong thanks to a potential ‘disaster hedge’ narrative playing out. The next few days will be telling, and a lot depends on the Federal Reserve’s emergency meeting, as well as the Russia/Ukraine tensions (which we believe are for the most part already priced in!).

In spite of the looming geopolitical tensions, Bitcoin has held strong, and maintained value well compared to legacy markets. It’s uncertain how the political unrest will play out in the future, but there’s no better place to be right now than (the right!) crypto assets, which can provide a superior form of money and an investment haven free of government censorship and control.