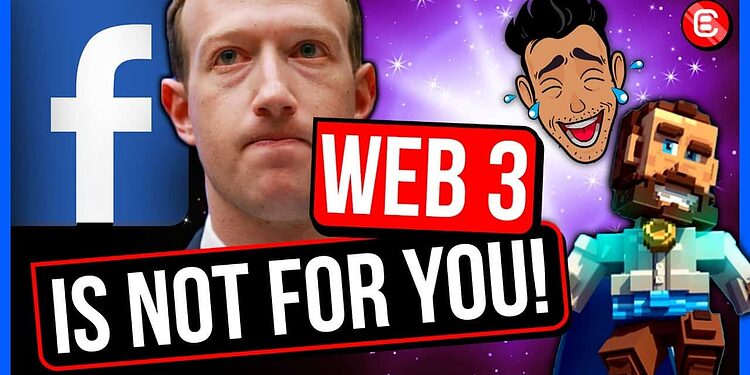 The Facebook (Meta) dump reveals major insight into what could happen next in the crypto metaverse.

Shares of Meta (parent company of Facebook) suddenly dropped 11% in one minute, and ended up plummeting over 20% after the company released their disappointing fourth-quarter financial results.

Shares of Meta (parent company of Facebook) suddenly dropped 11% in one minute, and ended up plummeting over 20% after the company released their disappointing fourth-quarter financial results.

But Meta’s poor performance speaks to a much larger conversation, and one that implicates the entire Web3 space: Do we really want these centralized entities getting involved at all? And if they do (and they are!), are they doomed to fail?

Meta’s fourth-quarter profit dropped from $11.22 billion to $10.29 billion from last year, which caused a negative market reaction. Facebook accounts for nearly 5% of the NASDAQ and its plunge amounted to nearly $200 billion in market cap losses – which is nearly the equivalent of Netflix’s market cap! Although the NASDAQ is up on the month following January’s sharp drop, the bearish price action brought along by Meta’s poor performance caused it to suffer a decline. If this bearish trend extends into tomorrow’s trading, it risks dragging down the entire tech sector and resulting in the overall market correction many have been waiting for.

“I’m encouraged by the progress we made this past year in a number of important growth areas like Reels, commerce, and virtual reality, and we’ll continue investing in these and other key priorities in 2022 as we work towards building the metaverse.”

While Zuckerberg and Meta were focused on their metaverse investments (worth $10 billion!), their global daily active users declined for the first time in 18-years. This shift in direction does seem to be a move out of desperation more than anything else. Facebook is attempting to pivot from being a social media platform riddled by bad press to a fully interoperable metaverse.

Decentralization is a necessity

Facebook’s history gives us some insight as to how a centralized metaverse would pan out. Facebook has shown numerous times (such as changing its pledge to not require a Facebook account to use Oculus) that it will always be willing to change the rules in order to boost profits. Locking in users to specific ecosystems has been a tried-and-true corporate success strategy, and the metaverse will be no different. The metaverse brings with it new ways to connect, work, and live, which is why laying down a solid foundation is essential. Ran stated in his interview with Ryan Selkis that he believes a decentralized metaverse is a necessity. It’s what we want. And a decentralized metaverse needs to be built, run, and managed with decentralized technology. That means:

Only these elements combined can deliver a secure, interoperable, and democratic (virtual) world governed by the users!

Decentralized computing has many benefits over centralized alternatives.

Desktops have improved so quickly that their performance exceeds the requirements of most applications. This causes most computers to remain idle (operating well below their full potential).

A decentralized system can harness this untapped technology to maximize efficiency.

Moreover, decentralized computing power is peer-to-peer, which prevents any issues that might arise from a centralized entity (shutdowns, slowdowns, etc.)

One project at the very pinnacle is the Render Network, which allows anyone to contribute their unused GPU power with ease. Render works by connecting anyone looking to perform 3D rendering jobs with those idle GPUs.

This strategy saves the users significant time and money since they don’t need to purchase high-end computers to handle these tasks in-house. Who’s going to render the metaverse? Surely, Render is a leading candidate, which is partly why the smartest investors in the space have been getting involved:

There are numerous reasons to use decentralized storage over centralized cloud storage. These include:

Decentralized storage products, like Arweave or Filecoin, store files (or in the case of the former, entire blockchains!) on multiple computers (called nodes), connected via a decentralized network. With cloud storage, when you need to access a file, you can request and receive it, but those holding your files can’t read them. Instead, decentralized storage ensures that you are the only one who can read your files. It does this by encrypting them, so that only you, the holder of the encryption key, are able to view them. Another benefit comes with sharding, which makes it so that no single entity holding your files has control of all of them, also providing an extra layer of protection.

A decentralized metaverse needs decentralized digital money. And interoperability will make crypto universal between all the future metaverse platforms. The worst-case scenario alternative isn’t worth even thinking about: International monetary borders operating within the metaverse, or a situation where each platform has to issue its own token, thus segregating the metaverses.

However, if this year has taught us anything, it’s that there’s an insatiable demand for decentralized stablecoins (the same was never said about Facebook’s centralized, and ultimately ill-fated Libra!).

As evidence, just look at UST’s massive market dominance spike over the recent months. There are plenty of reasons as to why it has seen its market share boom (incredible yield opportunities, increased token pairings, and a tremendous ability to maintain its peg during extreme volatility), but there’s also another dimension: Since it’s decentralized across the Terra network, it doesn’t fall under the regulatory purview of the Securities and Exchange Commission (SEC)!

Remember how much Facebook’s Libra scared the US authorities? Meanwhile, Tether Fud is always around the corner. We’re not saying that UST will be the currency of choice in the metaverse, but merely proving the point that a decentralized metaverse needs decentralized money, issued by a decentralized entity if it’s going to have staying power!

The case for centralized involvement

With all the negatives a centralized metaverse brings, there may well be some positives to come from Facebook entering the metaverse race, namely, attention and capital.