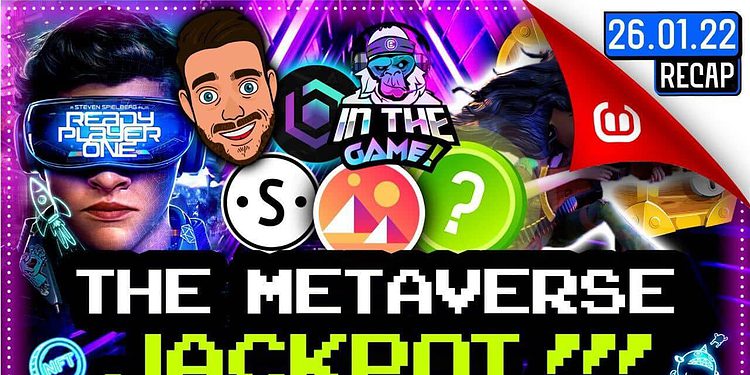 The metaverse race is heating up

Only a few so-called metaverse projects have achieved name recognition so far. Their valuations have exploded. But are they going to deliver? And which upcoming projects might be preparing to lead the way?

Hustle began the show with a simple question: what is the metaverse?

Simple, just ask the internet. As Google will tell you, a metaverse is ‘a virtual-reality space in which users can interact with a computer-generated environment and other users’. Or just watch Ready Player One!

So far, only a few so-called metaverse projects have achieved name recognition (and their valuations have exploded). But are they going to deliver? And what upcoming projects might be preparing to lead the way?

Decentraland went on a huge run in October 2021, amassed a market cap of over US$4 billion, and today, land is trading at a floor price of 4.47ETH.

Hustle isn’t hating on Decentraland, but just look at it:

It’s not exactly Ready Player One, right? And he raises a serious question: is this a metaverse, or a video game? After all, it looks like web3’s answer to The Sims.

Sandbox is another metaverse to have entered the mainstream consciousness. It also went on a major rally in October 2021, following Facebook’s rebrand to Meta.

Today, it has a fully diluted market cap of US$9 billion, and land is selling at a floor price of 3.469ETH per plot!

Now, Hustle’s pretty bullish on Sandbox, especially with the upcoming Alpha Season 2 on the way. But again. Metaverse? Video game? Or both?

In Hustle’s opinion, none of the metaverses out there quite live up to the name. At least, not just yet!

So the big question is, what next?

The up and comers

Here are a couple of Hustle’s top metaverses picks (that could be gearing up to challenge the main players!)

Let’s not forget, VR is a huge, huge market already.

At the same time, existing VR platforms are seriously lacking quality content, are plagued by entry issues, and in terms of allowing users to monetize content creation, they’re firmly stuck in the age of web2.

Netvrk takes VR into the web3 era with a metaverse that allows users to interact with powerful creation tools to seamlessly create, share, and monetize the VR experience.

A fully immersive, interactive metaverse in VR is simply incomparable to the likes of Decentraland, which looks like Habbo Hotel in comparison.

And land is flying off the shelves.

So are the super cool cars (and occasionally yacht!).

If that wasn’t enough, Netvrk also has some serious backing behind it, striking so many top-tier partnerships, to cover them all would take an article of its own. But the point is that the smart money is paying attention, keen to secure a slice of Netvrk pie (and build their virtual headquarters in its metaverse!).

With land currently going at a floor price of 1ETH on OpenSea, and a market cap of only US$57 million, Netvrk could be significantly undervalued!

Solice is a Solana-based VR metaverse, and it looks glorious.

Like Network’s metaverse, the diversity of the environment here is lightyears ahead of Sandbox, Decentraland, or Bloktopia; it’s utopian, futuristic and beautiful. If the immersiveness of Ready Player One is the benchmark, then Solice is headed in the right direction.

Before you get too excited, land sales aren’t live yet.

To get you really excited though, check this out:

Compared to the current leading metaverses, Solice’s supply of land parcels will be relatively scarce (which could have a bullish impact on price!).

All in all, Hustle reckons this is the most promising metaverse play on Solana today. The market cap (US$100 million) may not be small, but it’s still 5x from the likes of Bloktopia. And anyway, Hustle seems to think this one looks better!

What sets these up and comers apart?

It comes down to what a true metaverse is: namely, a virtual space that people will actually want to spend time in! In both instances, Netvrk and Solice promise something extraordinary; a genuinely immersive, interactive and visually stunning VR metaverse that could be straight from the realm of science fiction. Again, he remains bullish on the main players, but simply raises the question: what do we want from the metaverse?

The revolution will be decentralized

With the likes of Meta leading the race, a clear choice is going to emerge: will users want to commit to metaverses owned by tech giants in Silicon Valley, or decentralized alternatives? Either way, the decentralized metaverses will need to be able to compete in terms of overall quality of experience, and the likes of Netvrk and Solice look like they might be able to do just that.

In collaboration with Seedify, Hustle is launching the Seedify Mystery Box (with allocations to IGO tokens for a range of amazing projects!). It’s coming soon. You won’t want to miss it!

The metaverse race is wide open, and chances are there will be multiple winners. Plus, we’re still in the early stages – it’s too soon to tell which will rise to the top. But oe thing’s for sure: we need decentralized metaverses! Decentraland and Sandbox might be top contenders today, but look at the relative value (across market cap land price, for example!) of some of these up and coming projects, and ask yourself: are these VR-centric metaverses really going to lag behind forever? We’ll leave that for you to decide…