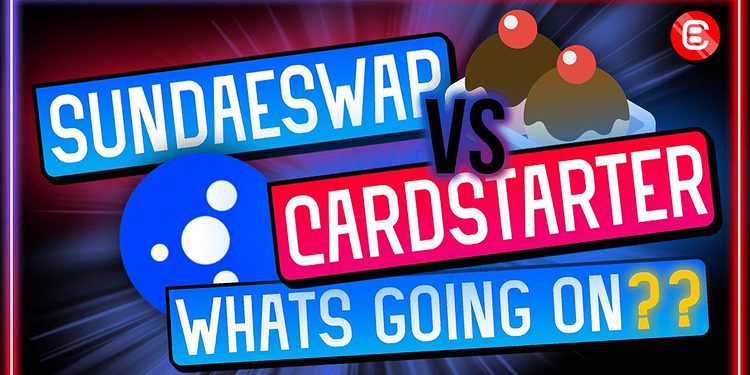 The SundaeSwap vs Cardstarter fight continues, and things are getting ugly

After a long and drawn out wait, the third largest smart-contract blockchain (by market cap) finally has a Decentralized Exchange (DEX) in SundaeSwap. There may have been a few congestion issues, but that’s beside the point!

This should have been a time for goodwill in the Cardano community.

After a long and drawn out wait, the third largest smart-contract blockchain (by market cap) finally has a Decentralized Exchange (DEX) in SundaeSwap. There may have been a few congestion issues, but that’s beside the point!

However, that Sundae sweetness didn’t last long; it turned sour pretty fast. And it set the stage for a bitter dispute.

CardStarter began life as a launchpad for Cardano projects, but by April 2021, it had announced plans to join the DEX-race unfolding in the ecosystem. Faced with no shortage of competitors, it threw its hat into the ring. Briefly.

Deal, or no deal

Three months later, it decided to change course. Rather than building its own DEX, CardStarter would wind down operations and partner up with leading contender SundaeSwap, paving the way for its inevitable success.

Further, when the DEX was finally launched, CardStarter would migrate around $50 million in liquidity in what was supposed to be a mutually beneficial deal. Precisely what the perks for the CardStarter community would be was kept strictly under wraps (to avoid the attention of the Securities and Exchange Commision).

The assumption was that the CardSwap (CSWAP) liquidity providers would eventually be rewarded in SundaeSwap’s governance token, SUNDAE itself. And with that, the two communities came together. Again, only briefly!

Anticipation was high for the announcement on the DEX launch day, 20 January 2022.

But the big reveal didn’t turn out as the CardStarter community had hoped.

The CSWAP holders who’d collectively provided $50 million in liquidity wouldn’t be receiving SUNDAE tokens after all. Instead, they’d be rewarded in CardStarter (CARDS), at a ratio of… 400:1 (CSWAP:CARDS).

Suffice to say, they were (and remain) furious. Although no formal guarantees had been made after the informal merger, many felt SundaeSwap had strategically (and intentionally) failed to dampen expectations.

In a bid to contextualize their decision – which many in the CardStarter community felt amounted to a last-minute betrayal – SundaeSwap Labs released a blog post that did little to calm tensions.

Here’s where it stands right now: after the perceived reneging at the last minute, SundaeSwap Labs agreed to reward the CSWAP token holders with 10 million SUNDAE tokens, just two days before the DEX launch.

This did not go down well.

Again, it only made matters worse, with documents now circling within the CardStarter community that (they claim) prove SundaeSwap Labs had tacitly (and informally) confirmed in October 2021 that the figure would be 150 million SUNDAE tokens.

There is no resolution as of yet. And clearly some compromise will have to be made on both sides. Undoubtedly, more will be revealed in the coming days, but already the escalating drama has shed some unwanted light on SundaeSwap Labs.

Whatever agreements may or may not have been struck, it seems that after having halted proceedings on a rival DEX, the CardStarter community is being offered a mere 1% of total SUNDAE tokens in return.

And to add insult to injury, the SundaeSwap team appear to have allocated themselves a whopping 25%! Not a good look.

For better or worse, crypto is an unregulated game in which communities are super important. The last thing you want to do is create enemies. Or sow distrust. The strength of faith in a project’s leadership can make or break its fortunes, and even more so communities!

However this particular drama pans out, it’s vital (for both parties) that SundaeSwap Labs and CardStarter can come together in search of a better solution.