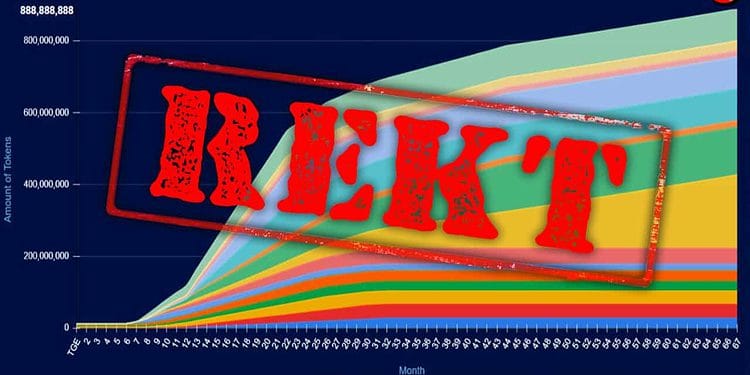 The whales will hate us for saying this…

Learning how to protect yourself against sharks is one of the most important skills in the game.

Everyone will tell you that HODLing is the best strategy but they might be making a mistake.

Because they’re ignoring the open secret at the heart of crypto investing.

Before we begin… the whales don’t want us talking about this.

They don’t want us writing this article.

And they definitely didn’t want Ran talking about it on the show earlier.

However, it’s something the community needs to hear, and to really take the time to absorb. This could be the most important advice we’ve given out in a long, long time.

Conventional investment wisdom is to find projects you believe in and hold for the long term.

If you believe in the network effects of Amazon, say, then buying Amazon stock makes sense. Buy it, hold it, and allow it to grow. Over time, its value should accrue.

Think of it as the Warren Buffet approach.

But in token investing, or blockchain investing, it’s not always true. And that’s because we have something that traditional investing does not.

Understanding what it means (and how to use it to your benefit) is paramount.

Because if you’re looking at a protocol and you don’t understand what tokenomics are, or how they work, the truth is, you’re swimming with the sharks.

And that’s what we’re going to explore here, demonstrating how HODLing (holding on for dear life) can sometimes count against you.

Don’t swim with sharks. Ever.

The people who lose the most money in the market are retail investors.

The people who make the most money are the team, the venture capitalists, and the early investors.

Learning how to protect yourself against them is one of the most important skills in the game.

What are tokenomics (and why are they so important)?

In simple terms, tokenomics refers to how tokens are distributed: Who gets them, and how they come onto the market?

Every project has tokenomics.

It’s the original example, and the rules were laid out from the very start:

Instead, Bitcoin tokenomics dictated that tokens went to the miners. Plus, over time, each block yielded fewer and fewer BTC.

When you invest in Bitcoin, you know newly minted BTC will be coming onto the market every couple of minutes, until the day (over a hundred years from now) when we reach 21 million in circulation.

So, the bitcoin cryptocurrency has two valuations:

The latter assumes all tokens are in the market.

In this case, that would mean all 21 million BTC.

In reality, there are just shy of 19 million BTC tokens in the market.

We know that over the next 120 years, there will be 21 million in the market.

We also know exactly how they are released. Right now, every 10 minutes, 6.24 BTC hit the market.

When you decide to buy BTC, you know exactly what you’re buying.

It’s similar (but different) with Ethereum.

Unlike Bitcoin, Ethereum has a supply that doesn’t end.

However, it also has a clear emission schedule, and as a result of EIP1559, we know ether (ETH) tokens are now burnt – the idea being that it will eventually become deflationary.

Every protocol has a breakdown of how tokens are going to be released, and when.

Let’s look at Moonbeam as an example.

This pie chart shows who owns the lion’s share of GLMR tokens.

As you can see, you can see some went to the original seed funders. Some went to strategic funding; to the people who loaned to parachain auctions; liquidity programs; key partners and advisors; the team, and also the treasury.

So, we know who has the tokens.

Now we need to check out the emissions schedule.

This chart shows us that in the beginning, right now, very few tokens are in the market.

In fact, only about 250 million of the 1 billion will be in the market to begin with – a very small percentage.

That means the tokens are very scarce.

So, if you’re buying the token in the beginning, you’re buying a scarce asset. The scarce supply drives up price, hype, and speculation.

At maximum hype and an inflated price, they start releasing tokens to reward the venture capitalists (VC).

In the case of Moonbeam, the seed funders get their money after 3 months and can begin selling a portion of their GLMR to retail…

At a serious ROI.

For seed investors, GLMR was going at 1 cent apiece.

(This data may not be 100 percent accurate, but the concept applies)

The ICO price was 25 cents.

By the time their tokens start to get released, GLMR was trading at 5, 6 or 7 dollars.

Before buying, you need to know who has got the tokens, and when the tokens will be coming onto the market?

In September 2020, they released a large chunk of tokens.

The rest, as they say, is history.

The Injective Protocol team was smart.

As you can see, the emission schedule didn’t give the team (in yellow) any allocations for a long time – almost a year. They didn’t give private seed investors allocations for quite some time either. Instead, they gave the protocol time to grow organically, ensuring VCs had to wait at least 6 months before drowning retail in tokens.

When is it okay to add tokens to the market?

For example, decentralized exchange (DEX) tokens are often being added to the market and people are providing liquidity for tokens.

BTC is continually being added because the network is being mined and secured.

Other projects will see tokens getting released because of ecosystem development. These kinds of tokens released are worth drowning in! Because they’re consistent with the overall value of the network.

Learning to make this distinction can be a make or break for your portfolio.

Understanding tokenomics is the most important thing you can do.

It’s also the one thing the whales don’t want you to learn.

Is buy and HODL always the best approach? Or is it sometimes better to wait?

Sometimes the best strategy is having patience. By checking the emissions schedule, sitting back, and watching retail ape into a new token, you can ensure you don’t fall into the trap of becoming exit liquidity for the sharks.