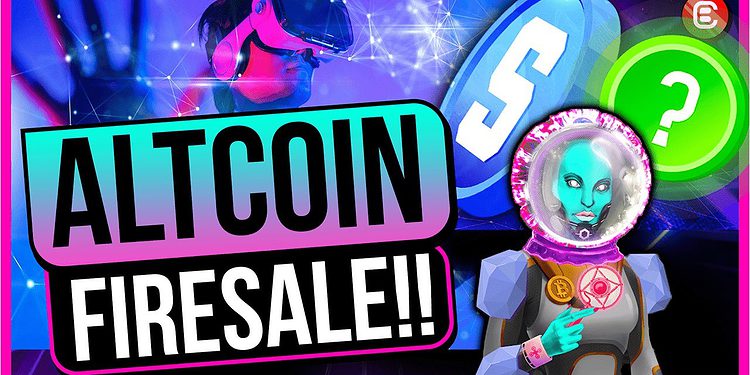 These are the kinds of micro-cap plays you don’t buy (if you want to kick yourself later!)

We absolutely love crypto! It’s the gift that never fails to deliver, because after every period of severe market distress comes a cycle rife with opportunity. Markets are volatile, irrational and often chaotic, but they do have a touch of predictability.

We absolutely love crypto! It’s the gift that never fails to deliver, because after every period of severe market distress comes a cycle rife with opportunity. Markets are volatile, irrational and often chaotic, but they do have a touch of predictability.

When a market-leading asset (such as Bitcoin) moves in a motion of volatility, it becomes a trend. That trend affects the entire crypto market, including altcoins, which have clearly taken a severe beating during the past 3-month market correction.

But, that is where the greatest opportunities exist.

Do you need to know why?

Market highs and lows are cyclical (and second nature) in the crypto industry. They determine project valuations, and that’s not a bad thing, because price action patterns present significant investment opportunities; it can be the difference between making US$500 or US$50K. However, Secrets of Crypto emphasized that smart money bets are placed on assets and projects that are undervalued. That’s precisely how the smart money lives up to its name, by being two steps ahead and investing in assets which are fundamentally sound, have taken the biggest beating, and are yet to enjoy the next hype cycle.

The overall crypto market generally follows a pattern. Initially, money flows into the market leader, Bitcoin, then into major coins such as ETH and other high-cap Layer-1s (L-1s), before moving down into mid-cap projects, to small-caps, and last, but definitely not least, into the micro-caps. High retail interest (FOMO) is the primary catalyst to ignite a strong bull market. With Bitcoin expected to front-run the Super Bowl ads show, smart money has already placed their bets on what might be a rush of new interest in the market.

Circling back to Secret of Crypto’s thesis, you should not be investing money in altcoins that have already rallied, experienced their hype cycle and completed a 5000% price increase. Instead, they should be allocated towards projects with solid fundamentals that are significantly down in price, and crucially, remain strong narrative bets in the near future (like metaverse, gaming, or DeFi). Why? As crypto experiences its hyper-adoption phase over the next months and years, undervalued projects will become the pioneers of digitized industries and markets, such as the Metaverse.

He’s following the same thesis. Similar to how Venture Capital (VC) firms and hedge funds allocate their capital to the next network disruptors: projects and companies that are severely undervalued, but stand a chance of being market leaders in the next bull cycle.

It’s only natural to buy into the craze now. In our metaverse portfolio article, we’ve covered how Facebook’s Meta has triggered the race for a complete digital brand immersion. According to Alex Becker, some projects are still undervalued and have a long way to go until they reach their peak, because Meta’s announcement was the first industry hype catalyst.

Decentralized worlds, games, and digital interactions are quickly becoming accepted by users. That’s because adoption relies on reframing our digital habits – including how we consume and utilize digital products. As a result, each crypto sector undergoes their own network effect, but remember, it took the industry more than 13 years to reach this point.

We’ve touched base with Hustle to give us a rundown of the five tokens on fire sale right now. And that includes both micro-caps and smaller-to-mid caps.

Before you start considering the micro-cap tokens, remember Bitcoin has just made a higher high. It might look to retest the US$41K level as the short term RSI is overbought. When Bitcoin is back at the support level, that’s when you should leap in! However, only allocate 1%-2% of your entire portfolio to the smaller cap plays, because the truth is – they are risky!

During Bitcoin’s downtrend, major altcoins lost 60%, if not more, from their all-time high valuations. All the while, micro-cap altcoins lost 80-90%, if not more. Some metaverse projects have been overvalued (post-Meta announcement) but are back down to fair market prices (pre-Meta announcement).
Don’t forget: investing in micro-caps is risky. They’re the very opposite of blue-chips, but, if you have an appetite for a riskier play you can invest a, small, portion of your portfolio into the most promising among them – as long as you’ve thoroughly researched each and every one. These sorts of projects can generate impossibly outsized returns – afterall it doesn’t take a whole lot of money to move a micro-cap’s value up 10,20,100x. However, they can also go to zero, which is why they should only ever make up a very small percentage of your portfolio. To be on the safe side, you also have to vet them from every angle beforehand! Use this checklist when assessing and analyzing a project, and never put all your eggs in one basket!