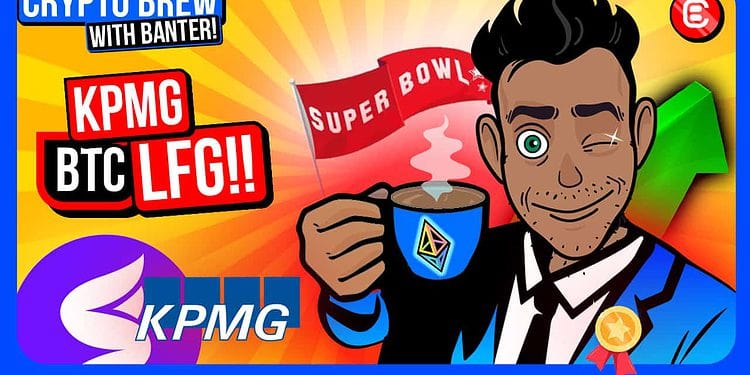 This is the most significant crypto event of the year

Good news comes like buses. You wait around forever, and then it all arrives at once!

Bitcoin just made a higher high on the chart. And as if that wasn’t good enough, this happened:

Let that sink in!

Good news comes like buses. You wait around forever, and then it all arrives at once!

Bitcoin was already on the move, and last night, we received some of the most exciting and significant news we’ve seen in a very long time.

KPMG (Klynveld Peat Marwick Goerdeler), one of the ‘Big 4’ global auditing firms, has announced that it has added Bitcoin and Ethereum to its corporate treasury.

Undoubtedly. This is a leading global auditing firm. KPMG works with governments, banks, and some of the world’s largest (and wealthiest) corporations. The significance of this move is impossible to understate!

Is this the bull run catalyst we’ve been waiting for?

Last year, Tesla’s announcement was the catalyst that took the bull run to new heights.

Will this be a case of history rhyming?

As Mr Biz puts it, meme coins pumping is one of the surest signs of retail interest returning.

With Bitcoin making a higher high, and this dog-coin signal indicating that retail is returning, it’s not surprising that Crypto Twitter has flipped bullish (almost overnight).

Things could be looking up for degens, as everyone (and their grandma!) knows that if BTC gets its running shoes on, altcoins could explode.

ProbleMATIC for the Layer-2 competition

As major altcoins gear up for a possible bull run, Polygon (MATIC) just hit it out of the ballpark with some incredibly bullish news.

Polygon just announced it had raised  $450 million in its first major funding round, led by Sequoia Capital India. Investment came from some huge names, such as Galaxy Digital, Tiger Global, Republic Capital and many more.

This represents a huge vote of confidence. Matic holders must be pretty ecstatic.

And it seems like Ellio has something in store. Rumour is, some major roadmap milestones will be announced. Keep your eyes peeled!

For the first time in sports history, watching a sports event could actually net you a Bitcoin (or a part of one), courtesy of FTX.

While the Super Bowl is on, four lucky winners will be selected by FTX, and the amount of Bitcoin the exchange gives away will be based on the Eastern Standard Time its commerical runs on NBC on Sunday, February 3, during the second half of the upcoming Super Bowl.

The KPMG news couldn’t have come at a better time. Nor could it be bigger. With Bitcoin printing a higher high and showing the first convincing signs of a reversal from the multi-month downtrend, an unexpected announcement was the very thing we needed: a potential catalyst for what could be the beginning of a new market cycle. And make no mistake, this is a big deal: KMPG is sending a message, and setting a precedent by adding crypto assets to its balance sheet. They may not hold as much as Michael Saylor’s Microstrategy, but this carries more weight: such a move from a Big 4 auditing firm is a huge vote of confidence in the staying power of Bitcoin (and the asset class at large). These are the guys who audit banks, and who determine risk on behalf of its clients. The risk profile of Bitcoin (and Ethereum) is slowly (but surely) being transformed.