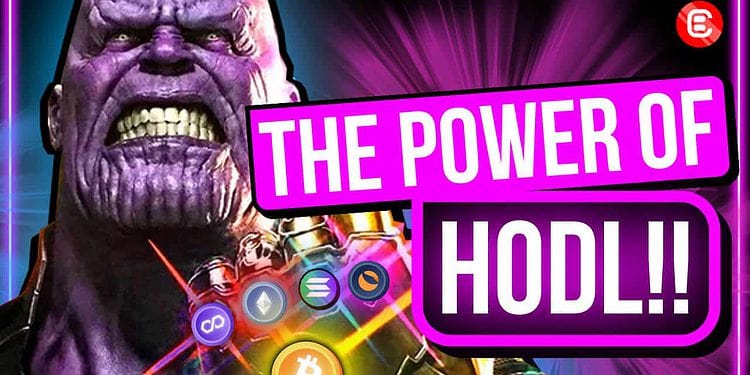 Time in the market beats timing the market, picking bottoms almost always leads to smelly fingers, and this strategy absolutely decimates the competition!

The market has taken a serious hit. Worse yet, it’s moving sideways, and doing what it does best: shaking out weak hands and testing our collective resolve.

The market has taken a serious hit. Worse yet, it’s moving sideways, and doing what it does best: shaking out weak hands and testing our collective resolve.

Traders are waiting for Bitcoin to make a move (whether to the upside, or back down to test the lows). And those playing with leverage are taking a huge risk, with potentially catastrophic consequences!

Meanwhile, one proven strategy is all but guaranteed to outperform even the most seasoned scalpers, swing, or breakout traders. It’s unbeatable. And not a single crypto fund has managed to surpass its potential returns.

Patience, a strong stomach, crazy conviction, and an ability to drown out the noise.

It’s the power of the (dollar-cost averaging) diamond hands.

Microstrategy CEO Michael Saylor may be relatively new to the crypto space, but he’s quickly emerged as one of the leading communicators on Bitcoin. As well as one of the largest whales in the world. Today, his conviction could be coming under scrutiny from shareholders!

Is he worried? Nope. Because Michael Saylor is the living embodiment of a diamond-handed strategy. He hasn’t been HODLing for long (his first purchase came in 2020), but his time horizon is almost infinite: this is someone not looking to sell this week, month, year or even this decade. And since his conviction that Bitcoin is the ‘apex predator’ asset appears unshakeable, short-term price fluctuations are just noise to him.

Historically, staying in Bitcoin (HODLing) has proven the ultimate recipe for success over the long term. A picture says a thousand words!

But you’re not Michael Saylor… And chances are, you’re not planning to HODL all your favorite tokens for a decade, let alone a century. So let’s just cast our minds back a year, and see how powerful a diamond-handed hodler can be across a much shorter time-frame.

If you’d bought LUNA when Ran first started talking about it (and weathered the ups and downs), you’d have gotten in well under a dollar.

Is this still the most undervalued large(ish) cap project out there? Could be. Again, Ran was calling this one as far back as November 2020. Why? Because as the ultimate blockchain storage protocol, it really does have the potential to change the world!

Had you picked some up exactly a year ago, at around $5, you’d be sitting on a 670% return on investment (ROI).

That’s if you hadn’t sold. Notice how it reached a low of 7$ during the May correction? No doubt many panicked, shaken out, and ended up selling their AR either at a minor profit, or possibly even a loss.

Solana had one of the most stunning runs of last year.

Those who held through volatility, dumps, and bumps along the way won big.

This crazy-haired maverick had all the conviction in the world. And a $3 dollar entry would have amounted to 3500% gains at today’s prices.

FTM has had no shortage of peaks and troughs over the past year. And look, after the May crash, anyone who’d bought in the previous few months was underwater! And now look. The gains have been out of this world. The momentum is only just beginning: this past month, Fantom has seen more volume growth than any of its Layer-1 rivals, and over time will continue to prove that fundamentals outweigh price action.

It’s still the daddy. And while the returns over the past year might not be much to rejoice about, nobody is mourning their losses!

We’re pretty much back where we started. How’s that for a safe haven asset? Crucially, remember the following: Nobody who’s ever held Bitcoin for more than four years has ever lost money. Ever. Let that sink in! But you know who has? Inexperienced (and experienced!) traders alike (as well as people with hands made of spinach).

As Bitcoin’s adoption continues to grow at an exponential rate, it’s following a beautiful logarithmic growth curve, and it’s still perfectly in trend.

Dollar cost for that perfect entry

It’s all well and good getting a dream entry: trying to secure it is all but impossible.

That’s why Dollar-Cost Averaging remains such a powerful tool (buying a set amount, at set intervals, without paying attention to price).

See that? The orange line represents an approximate average entry position across time.

And you might be screaming, “But why not buy the dip instead”? Well, good luck calling the exact bottom every time. But if you love stinky fingers, go for it!

Jokes aside, this fascinating Twitter thread presents an excellent comparison between DCAing and buying the dip, and guess what, even if you call each dip to a T, you’re still unlikely to outperform a regular buying strategy.

Over a long-term time horizon, the power of DCA and HODLing is effectively unbeatable. Many have tried, and few (if any!) have succeeded.

As ever, this only applies when it comes to quality projects with network effect. Shitcoins will get REKT into extinction. You can’t HODL them and expect to have anything left over at the end of the day.

DCAing into quality and HODLing are time-tested recipes for success. You just need the conviction to stick with it (and stick around!)

Amazon was pretty volatile way back when, remember?

Imagine not having HODL’d all the way through!

Times like these are a test of our resolve but they should never sway our long-term perspective. Irrespective of market conditions, these two strategies (so long as you apply them to the right assets!) are proven to work better than almost anything else. There’s a time to be a trader to maximize those short-term gains. However it’s always the right time to sit on your hands, DCA, and play the long game (for long-term success!)