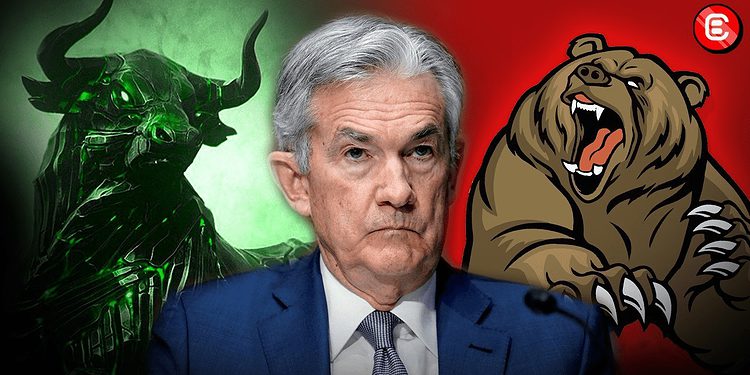 Tomorrow’s FOMC meeting could kill all markets (unless this happens)

It’s a huge week for financial markets, and by extension, bitcoin too.

It’s a huge week for financial markets, and by extension, bitcoin too.

And it shows – the markets are jittery across the board. A cocktail of the ongoing Russia/Ukraine conflict, soaring US inflation, and the prospect of supply-chain issues worsening thanks to China’s zero-tolerance coronavirus policy provides a nervous backdrop: In the foreground, tomorrow’s Federal Open Monetary Committee (FOMC) meeting, the results of which will set the stage for the months ahead.

Let’s break it down in terms of possible outcomes.

The Federal Reserve (Fed) is expected to announce an interest rate hike, and from every angle, that’s likely to be bearish for risk assets, which are sensitive to tighter monetary conditions. When there’s not as much money available, and it’s not as cheap as it once was, equities tend to suffer.

How did we get here?

In February, Jerome Powell indicated that rate hikes of 50 basis points (bps) in March were possible, with James Bullard suggesting that he’d like to see an increase to 100 bps by July.

But then, Russia invaded Ukraine, and the Fed found itself with its hands tied: Despite the recent Consumer Price Index (CPI) data coming in at 7.9%, overly hawkish monetary policy is off the table. Or so we think.

Right now, the markets are overwhelmingly predicting the figure to be at 25 bps.

On the basis that it plays out as expected, it’s safe to assume this has been more than priced in.

The market’s reaction to the last three months shows how wary of the Federal Reserve’s mandate (to stem inflation) it has become.

Those previous conditions that had led to a huge expansion in risk assets since March 2020 are being scaled back.

As a result, the NASDAQ is down almost 22% from the highs.

The market has been preparing for a rate hike ever since the Fed’s hawkish turn in December, and the bringing forward of quantitative easing completion – which was finally achieved last Friday.

A 25-basis-point hike won’t unsettle markets, but it only tells half the story of what could happen tomorrow.

It’s not just an update on rate hikes that will come out of the meeting, but also the FOMC statement (“forward guidance”), and the federal funds rate.

And following that, half an hour later, the FOMC press conference – probably the most important event of the month.

We also need to consider the real gross domestic product (GDP), the unemployment rate, personal consumption expenditures (PCE) inflation, and how they are projected to evolve into the future.

These metrics will be updated by the Federal Reserve.

As it stands, the unemployment rate is projected to remain steady.

Those projections will be priced in to an extent by the market.

However, it’s not just rate hikes that will come out of the meeting, but also the FOMC statement, the federal funds rate, and an updated “dot plot”, which charts individual committee members’ expectations on how many rate hikes will be introduced across the year, and when.

Could we get a nasty (or welcome) surprise?

The chances are slim, but anything is possible.

Both are, at present, unlikely.

The real “alpha” will probably be contained within the “forward guidance”: That’s the communication and carefully constructed language which Jerome Powell and other Fed members use when answering questions from the press.

Remember what happened in February? The FOMC meeting was a non-event, but over the course of discussion with the press shortly thereafter, the markets began to see some downside pressure as Powell’s language became increasingly hawkish.

We can therefore expect bitcoin and equities to remain jittery up until (and as) the Federal Reserve starts to speak at 06:30 p.m. Eastern Standard Time tomorrow.

The likelihood of a bounce?

Whether or not risk assets get a relief likely depends on the FOMC’s forward guidance.

So, if it gets that, if it gets the revised projections which are slightly downgraded (and in line with the inflation expectations), and if it gets a “dot plot” which shows up to (but no more than) 4 to 5 hikes, a bounce is possible.

Currently, as tadtalksmacro suggests, the 4 to 5 hikes are coming in at a 40% probability.

If the Fed plays ball, the market should get some relief as expectations are realized.

This may then turn out to be a case of “sell the rumor” and “buy the news”.

Nobody can see into the future.

However, some analysts are doing a pretty good job at seeing around corners and making calculated assumptions.

We highly recommend you check out Nick Timiraos’s excellent Twitter thread about the factors determining how many (and how aggressive) further rate hikes are likely across this year, and even the next.

The market needs clarity, and we might get some tomorrow. Previous meetings were typified by inaction and forward guidance, but the chances of this pattern continuing appear slim. We will most likely see some muted, “tied-hand” action: The maximum the FOMC can get away with is also the minimum we can reasonably expect. But again, it might be a case of listening to what they say, and not so much to what they do. We’ll be following this all very closely.