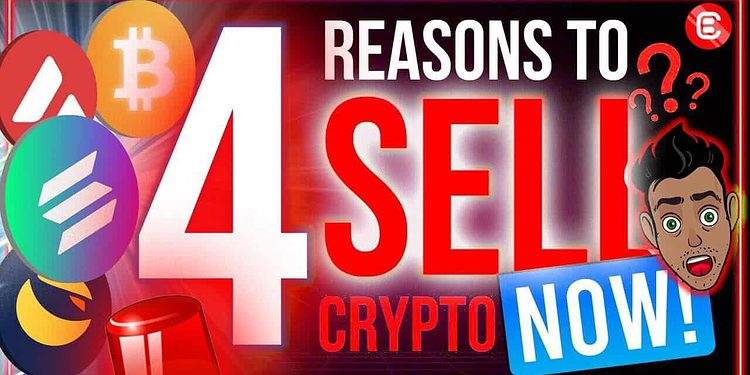 The top 4 reasons why you should sell your crypto!

The market is the grips of uncertainty, and fear is sky-high! You might be asking... “Should I sell?” These are 4 reasons sell your crypto. And they might surprise you!

There are no two ways to spin it: the market has taken a serious hit.

Meanwhile, the total market cap has been slashed in half.

Blood is everywhere. The bears are dominating. And people are rightfully scared.

Sentiment is flip-flopping between cautious optimism, and worst-case-scenario.

With all this panic and uncertainty, you might be asking…

Well, there are only four times that you should ever sell your crypto. And they might surprise you!

Has your thesis changed?

If your overall thesis changes, then it might be a good time to reassess – and maybe sell!

At Crypto Banter, we believe in the need for decentralized computing power at a global scale.

Clearly, there is an insatiable appetite for blockchain technology across a vast array of industries. Meanwhile, as Raoul Pal would say, crypto is being adopted faster than any other technology in all recorded history. Additionally, gaming and the metaverse are the hottest tickets in town (and could be the leading drivers of mass adoption). Every major brand is getting involved, however they can.

Our thesis remains intact: This insatiable demand is driving an equally insatiable demand for Layer-1 technology, which has its limits. So, we’re going to need Layer-2s! A multichain world is necessary, since no single one alone can carry the weight of a world running on the blockchain.

As for price? Price is a lagging indicator. Crypto markets may be suffering today, but under the hood, developer activity is going parabolic.

Build it, and they will come (and the price will follow suit!)

We believe that blockchain technology is (at least!) the greatest innovation since the internet itself, and every bit as transformative. Until that changes, we’re NOT selling! If a superior alternative technology comes along and begins to absorb market share, only then would we reconsider. Because that would mean our thesis was invalidated!

Recoupment of capital and redeployment elsewhere

In other words, take profits.

The question is what to do with them?

Do you want to put them into the ultimate shitcoin – fiat currency? Neither do we. Sometimes it’s necessary, but we’ll get to that later.

Better still is to recoup capital for redeployment elsewhere. That might mean adding to your HODL portfolio, or adding exposure in those top protocols where you might be underweight. For example, you might have made huge gains on Bitcoin, but your Ethereum bag is looking pathetic by comparison? Redelegate. Rebalance. Sell only to strategically diversify!

As an example, Imagine you’d made a fortune on Axie Infinity (AXS). Take those profits and reinvest in something else, an up-and-comer. Pegaxy, for example. That way you have exposure to two amazing projects, and are maximizing your upside potential, while minimizing downside risk. Spreading your bets makes sense (especially if you’ve already seen huge gains), because two projects have less chance of failing than one.

That’s not the only option though. Capital recoupment might also mean adding to your stablecoin reserves (and earning insane yield through the likes of Anchor Protocol). After all, your cash-o-meter should be healthy enough to take advantage of any dips.

The key is to have a coherent stablecoin strategy. This recent article of ours might be a good place to start!

“If you fail to plan, you plan to fail”.

The team is scammy (or hopeless)

Ask yourself: is the team honoring its roadmap? If not, are the reasons technical? Or is something fishy going on? Delays can happen, and sometimes things move slowly. But are they being communicative with the community? Look at Cardano! The trust within the community is second to none, and they’ve been going since before Satoshi Nakomoto wrote his whitepaper! Just kidding.

But there are other red flags to watch out for.

Besides, this week has shown that even the most reputable teams can have some bad apples lurking within. Especially in DeFi, where anonymous team members are the norm! Not that anyone knew until they knew, but as a very recent example, the Wonderland debacle proves our point!

Before investing in a protocol, always Do Your Own Research (DYOR) and vet the legitimacy of the team behind it. That might mean:

If you don’t get the right answers, or if something seems amiss, it might be time to cut your losses, sell, and redeploy!

You need filthy fiat for expenses

If you can’t pay the electric bills, then you’re clearly overextended.

We need to eat, put gas in the car, and keep everything ticking over. If you’re struggling to do any of the above because your wealth is tied up in crypto, now might be a good time to sell those digital assets (and have a good hard look in the mirror).

But here’s the key point:

There is only one Harry Yeh. And chances are, it’s not you. If you’re a billionaire like him, go wild. Do your thing. Otherwise, be cool. However much you might disagree, really, you don’t need that Lamborghini.

Plus, imagine being the guy who sold all his Bitcoin at $500 after a $5 dollar entry to buy a supercar. You would have felt like a genius at the time, but undoubtedly you could’ve

For ultimate inspiration, check out Ran’s seminal Banter episode ‘How I turned $30,000 into $35 million’

Did Ran sell at a 10x and go on a shopping spree?

In short, don’t exit the market. Never exit the market! Even during the most miserable bear market, you’re far better off sitting in the stables and earning in excess of 20% yield!

So long as you believe that the world will continue to want decentralized computing power, peer-to-peer payment networks and a metaverse to explore, then selling your assets makes zero sense. As long as blockchain technology is the cutting edge, we’re in.

And never, ever forget the Banter mantra: Invest in protocols that will change the world, and give them the time to do their thing!