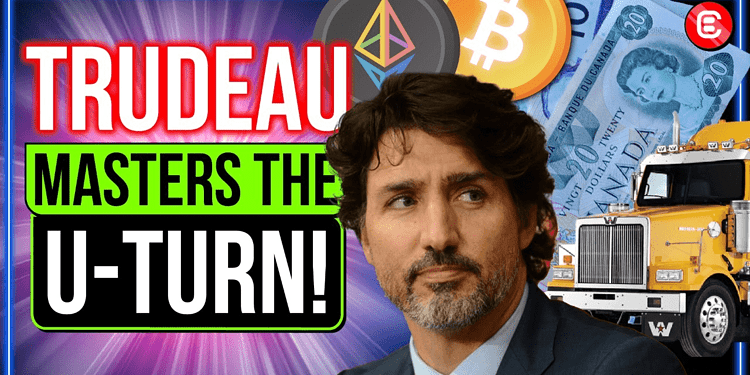 Trudeau scraps draconian measures, but the damage is done: he could struggle to live this one down.

The Emergencies Act was voted in last week, with the extraordinary powers confirmed on Monday. At the time, Trudeau stated they would not be extended beyond when they were “necessary”.

It appears Canadian Prime Minister Justin Trudeau has had a change of heart (or simply bowed to pressure in the face of widespread criticism), pulling off a successful U-turn maneuver on Wednesday, revoking the emergency powers introduced to stifle the truckers’ Freedom Convoy movement.

The Emergencies Act was voted in last week, with the extraordinary powers confirmed on Monday. At the time, Trudeau stated they would not be extended beyond when they were “necessary”.

In yesterday’s press conference, Trudeau said: “The situation is no longer an emergency, therefore the federal government will be ending the use of the emergencies act,” since they “are confident that existing laws and bylaws are sufficient to keep people safe”.

The Emergencies Act granted the authorities unprecedented powers: the ability to declare certain locations as “no-go zones”, as well as a raft of financial powers that involved the ability to freeze the assets of anyone affiliated with the trucker protest.

The Freedom Convoy movement captured the public imagination and inspired similar convoys in Europe. Canada’s crackdown on what was deemed a peaceful protest by the wider public also encouraged bitcoin donations to the cause as a way to subvert the Emergencies Act, even though crypto donations were officially outlawed. Kraken CEO, Jesse Powell, and Coinbase CEO, Brian Armstrong, were even reported to Ottawa law enforcement for implicitly condemning the Canadian government and encouraging customers to use self-custody wallets!

The Emergencies Act may have been revoked, but it will not be forgotten in a hurry. Justin Trudeau’s heavy-headed approach was both a damning indictment of his premiership, but also an effective advert for the role of decentralized money and payment rails.

He couldn’t have made the point more effectively if he’d tried.