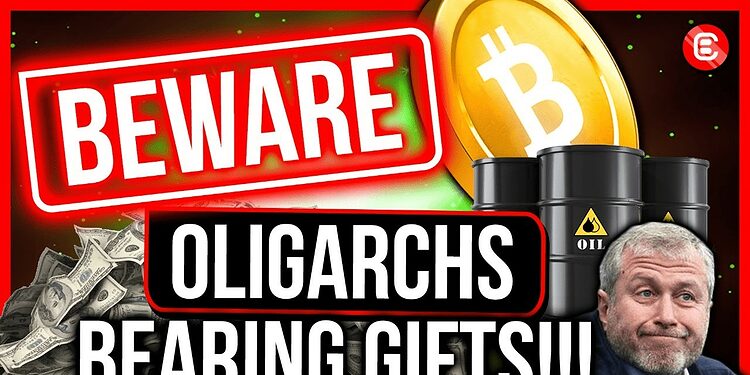 Surely, with the Russia/Ukraine conflict priced in, and the unlikelihood of any aggressive rate hikes from the Federal Reserve, it’s blue skies ahead, right?

Crypto has been massively outperforming traditional markets over the past few days, and the bulls have a spring in their collective stride. Surely, with the Russia/Ukraine conflict priced in, and the unlikelihood of any aggressive rate hikes from the Federal Reserve, it’s blue skies ahead, right?

We also need to consider the alternatives: namely, a potential sequence of events that could launch global markets into disarray, and bring crypto crashing down with it.

You won’t want to hear this but you need to, because the consequences could be catastrophic.

The sanctions are piling up, and it’s a race against time for the oligarchs to safeguard their assets.

In yesterday’s article, we covered how the Russian elite were flocking to buy bitcoin in an attempt to circumvent any potential sanctions against them.

In the meantime, some of the richest Russians around are engaged in a mad scramble to liquidate assets (and protect the proceeds!) before those assets get frozen.

Earlier today, Mr. Abramovich put his beloved Chelsea Football Club up for sale to the tune of $4 billion.

Bitcoin could be the only life raft

With seemingly nowhere to go, bitcoin is the obvious choice. Where else can they park their money without fear of seizure?

And yes, that could bring some serious price action to the days and weeks ahead.

Just how rich are oligarchs?

Rich. Really rich. Their combined wealth is estimated at $800 billion.

But how much bitcoin are they likely to buy?

Well, let’s use a conservative estimate: Imagine they were able to convert 20% of their combined liquid (or soon to be liquid) wealth into BTC, the potential inflow is massive.

For a Russian oligarch, there really is no time like the present. This needs to be done fast.

So fast, in fact, that it may trigger a bitcoin (and in turn, altcoin) buying frenzy which could send prices stratospheric in the space of a few weeks.

Most insane bull run of all time imminent? Or a dead-cat bounce?

So, what’s the problem? Surely this would trigger a massive inflow of retail chasing a serious case of FOMO?

Here’s the problem. And it comes in the form of a question: Apart from the oligarchs, who’s buying?

Bitcoin spent many weeks at a 40 – 50% discount compared to its all-time high, and on-chain analysis shows that the smart money was busy stacking sats.

Chances are, the institutions won’t be chasing the Russian oligarch pump.

And that means we might be now relying on only one significant buyer in the market. Yes, retail FOMO will likely kick in (to a degree), but remember what happened the last time we broke all-time highs?

Didn’t last long, did it?

The bloody conflict continues. Ukraine has been left in tatters. Commodity prices are at record levels. And inflation is sky high.

The cost of war begins to mount. Suddenly, both sovereign and corporate debt begins to default.

The consequences of a Russian debt default would reverberate across financial markets, with devastating effects: Russian and non-Russian banks which own Russian government bonds would be placed under immense pressure.

Those countries most exposed to Russian debt would be extremely vulnerable, and the potential domino effect of bank defaults would trigger a financial crisis.

While we’re not saying that Russian debt is at junk-bond levels, those countries heavily exposed to Russia must be getting a little twitchy.

In a worst-case scenario, the sequence of events would cause stock markets to crash as global asset liquidations begin to cascade.

Crypto markets will not be immune. Correlations between crypto and traditional markets must be watched at all times. The shock waves of potential defaults will be felt first in the stock markets, before, inevitably, spilling over.

What happens when the music stops?

Back to the present day.

Bitcoin has established itself as an elite and borderless payment system, accessible by all.

Demand is back in the market, and the price has been responding.

Russian oligarchs may well have been the catalyst that helped to regain the $40k+ level, and with more asset liquidations to come, they could yet drive the price up further.

And then what? What happens when there’s no more oligarch money left to enter the market?

What happens when the buying stops?

If Russian oligarchs are the main buyer right now, that could spell disaster: Bitcoin would eventually lose its underlying bid.

Retail FOMO money would, once again, buy the top.

Smart money will be waiting patiently for any capitulations.

Combined with a potential contagion event triggered by the fallout of the Russia/Ukraine conflict, and you can imagine.

Russia sneezes and the rest of the world would catch a cold.

Something about history and being doomed to repeat itself

The government announced severe austerity measures, a legacy of the 2009 bailout.

And Greeks scrambled to safeguard their money by flocking into bitcoin.

That insane green candle coincided exactly with the Greek crisis.

And look what happened afterwards.

Eventually, the buying stopped. Prices fell from above $1k. And by the time Greece defaulted on their US$1.7b payment to the IMF, bitcoin was back at US$200.

A glimpse of things to come? It’s possible. And you need to be prepared.

As the saying goes, history doesn’t necessarily repeat itself, but it often rhymes.

This is a hypothesis but one we have to consider. Failure to do so could be a disaster of misjudgment!

The stock markets hold the key.

Right now, Bitcoin has “de-correlated” from legacy markets, and it may continue to separate further still. However, if we get to the point of a massive de-correlation, that might be the time for maximum vigilance!

Remember, the economic fallout from war is usually felt in the ensuing months and years.

But the problems could come even sooner: Russian debt may default, and any subsequent banking failures could trigger a dangerous chain of events, putting both crypto and equity markets under extreme pressure.

Not all good things are what they seem.