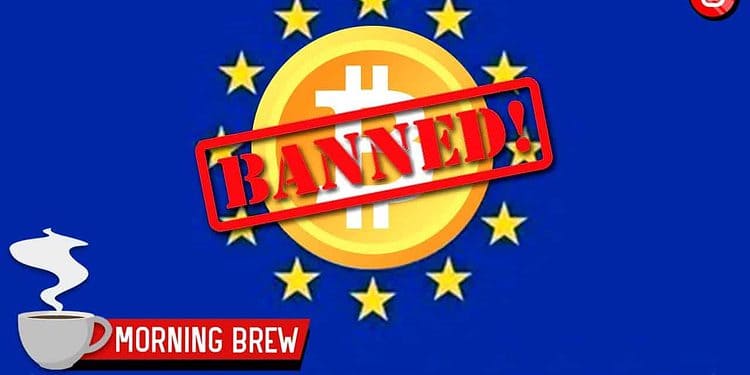 Warning: The EU could be about to kill Bitcoin once and for all

All this and more in your Crypto Brew!

MiCa is part of the greater European Commission’s new Digital Finance package, which ultimately aims to create a regulatory framework for crypto-assets and digital finance. Unfortunately, the legislative package includes some controversial sections that could eventually lead to banning proof-of-work (PoW) cryptocurrencies, such as Bitcoin. Jean Marie Mognetti, CEO and Founder of Coin Shares, contends in the well-researched and data-backed Twitter thread below:

There are reports that negotiations are developing between warring nations Ukraine and Russia. US Secretary of State Wendy Sherman suggested that sanctions could be tugging Russia towards diplomacy. Award-winning journalist Christo Grovez unwraps the details in the following thread:

The Federal Reserve (Fed) meeting transpires Wednesday at 1400 EST, with a likely rate hike. The Fed will reportedly begin hikes with a modest 25 basis points (bps) or 0.25% in the face of record inflation. However, the Russia/Ukraine war has complicated the Fed’s plan to restrain inflation in the US, and Chairman Powell has stated that he plans “a more cautious approach” in the Senate hearing last week.

Bitcoin (BTC) holds above $37k after a solid sell-off to open the Asia trading session. BTC continues to range between $37k – $45k, as it has done for over two months now, despite several macro-induced challenges. BTC ended Sunday up +2.58% at 38.7k.

Don’t turn away now; this could be a massive week for crypto markets, depending on how all events devolve. On the one hand, the Fed will enact rate hikes that are likely already priced in the market. On the other hand, a misinformed EU committee will vote on a legislative package that could ban PoW crypto-assets. And for the sake of everyone, the Russian/Ukraine conflict may be taking a turn for the best.