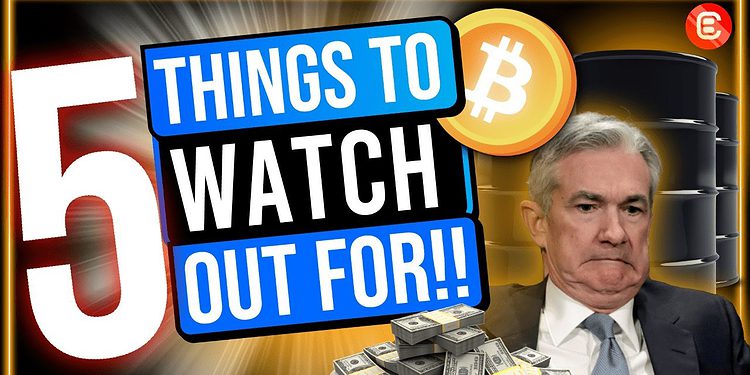 What every crypto investor should be paying attention to

We have people calling for $20k bitcoin. Others believe we’re about to see a huge run in 2022.

The market is a reflection of the world. And right now, it’s in a state of confusion.

We have people calling for $20k bitcoin.

Truth is, the markets are clearly dependent on global events. Once upon a time, bitcoin and crypto were outliers, niche assets that tended to move in 4-year cycles which paid little attention to the outside world.

Today, it’s different, which is why crypto people need to know about the world they live in. Ignorance is no longer viable for crypto traders or investors.

With that in mind, here are the top five events on the horizon that could determine the market’s next move.

Thursday, March 10th will show us how well (or badly) the Federal Reserve (Fed) has managed to curtail inflation, and right now, expectations aren’t too high. The Consumer Price Index (CPI) data is expected to come in at around 8%, which would make it the highest year-on-year inflation the US economy has seen in 40 years. Traditional (and crypto) markets are watching closely, and it is highly likely that the charts will react depending on the outcome of the data, whether it’s surprisingly high, or surprisingly low!

Who doesn’t look forward to the Federal Open Market Committee (FOMC) meetings? Generally, it’s investors, since the FOMC tends to determine short-term changes in monetary policy. The Committee holds a vote on policy changes, which usually concerns interest rates,  quantitative easing, quantitative tightening and stimulus spending. And all eyes are on this one coming up that will take place on March 15th.

The Russian ruble has now hit an all-time low, plummeting to 139.5 rubles against the US dollar. Year to date, it has dropped approximately 38%, making it now worth less than a cent. There are also talks of a potential oil embargo against Russia, which would be bad not just for the Russian economy, but for anyone dependent on its oil. Meanwhile, European gas futures have soared, jumping 35% in light of the potential oil embargo.

Russia has recently announced plans to “shut down” global internet access, relying entirely on its own servers. We still don’t have all the info around this, and no decision appears to have been made public yet, but if Russia were to cut off the world, and have its citizens rely solely on receiving news from within Russia, it would only further cement the growing political divide.

If you want to get more news on the ongoing events surrounding this conflict, check out our dedicated series bringing you all the latest Russia/Ukraine news that is affecting global markets.

The Bitcoin Fear and Greed Index is now sitting at 23, indicating extreme fear. Last month, it sat at 33 (fear), but after bitcoin failed to break the $45,000 resistance level, sentiment has taken a fall along with price. This isn’t to say that we’re definitely going to flip the index to greed any time soon, but history has shown that the Fear and Greed Index is one of the most reliable indicators out there when it comes to establishing buying opportunities.

Whether they’re a self-fulfilling prophecy or not, CME gaps (Chicago Mercantile Exchange), for the most part, get filled. Right now, we have an unclosed CME gap sitting at $39,600. It is more than likely that the CME gap will act as a magnet, and draw the bitcoin price towards it in order for it to close.

This is a difficult time to apply technical analysis to bitcoin charts, because right now, prices are being determined by such a wide range of different, interrelating factors. The above 5 points will all be significant determinants for the market this month, but none of them exist in a vacuum. In fact, they each affect the other. That’s why it’s crucial to have a holistic worldview in these times, to contextualize what’s happening, and why. Without that, it’s impossible to make an educated guess as to what could happen next. The thing is the market is maturing. Considering how much more institutional money there is in crypto now, CPI data matters. So do FOMC meetings. And that wasn’t the case back in 2017. The times are changing, and unless you’re up to speed, you’ll only end up making poor investment decisions,