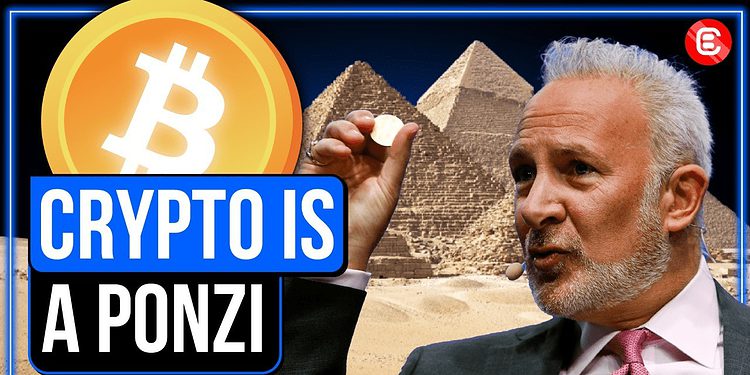 When in doubt, sell out

Crypto isn’t real. Nothing is backing it. It has no physical product, no FDIC insurance, no company backing it, such as Microsoft or Google, and there are hardly any trading regulations at all.

I wish I was joking about this, but I’m never joking.

You had ample warning. You ignored it.

Crypto isn’t real. Nothing is backing it. It has no physical product, no FDIC insurance, no company backing it, such as Microsoft or Google, and there are hardly any trading regulations at all.

Literally, the only value given to cryptocurrency is the price that people are willing to pay for it. This means your only hope as a buyer is that someone will buy your bags at a higher price.

Explain to me how that isn’t a Ponzi scheme again?

The only cryptocurrency worth holding onto at this point is Dogecoin, and I’m even starting to get skeptical of that.

Let’s talk about how this big useless Ponzi scheme is going to crash and burn.

Now, clearly, all of that just now — was a joke. Sorry, not sorry. That said, the recent 51 mainstream media articles and videos that called “Bitcoin dead,” weren’t joking. At this point I only want to say, guys, we get it. We know. You don’t understand crypto at all, so it must be a pyramid scheme.

Bitcoin isn’t going anywhere and neither is D̶o̶g̶e̶c̶o̶i̶n̶ Ethereum.

Anyway, bear markets do bring up serious questions. Here’s an interesting one, “Why was cryptocurrency created within the 2008 financial crisis?”

One critic on Twitter said the answer to that question lies in who is perpetuating the crypto markets right now. The cryptocurrency whales. These are the investors amongst us who got in early, have the most money, and have the most control in crypto.

Don’t forget: all it takes is for a couple of big players to throw in the towel and your entire portfolio will be worth less than pocket lint.

So, is crypto the biggest Ponzi scheme that has ever existed?

Oh, sorry, I’m thinking of fiat money and our current economic system. Truly, everything in life is a Ponzi. The cash we all spend always circulates because it’s used and trusted by everyone; the same way that crypto will keep circulating too, as it’s far too developed and successful to fail.

Bitcoin is the perfect Ponzi. It will never again go down to $1,000 because it hit $20,000, and there are too many millionaires in the world who would buy all of it if it were to fall that low.

Every time we make a new all-time high, the floor gets raised. That means if you’re reading this, you’re still early.

In fact, he says Bitcoin is much “worse than a Madoff-style Ponzi scheme.”

He’s right, about one thing: Crypto is not rational by almost all investing standards, but it has been the best-performing asset class by a mile and it’s not even close.

What I’ve come to notice is that most of the people arguing for the death of Bitcoin haven’t bought a virtual good in their life. They say; “but the virtual world isn’t that important man!” Then, these same people go and advocate for remote work and socially distanced virtual events.

They are also the same people who don’t realize that in-app purchases account for 48.2% of total app earnings, and that transactions of digital items in video games are a $35 billion empire.

In all honesty, we’re already living in a metaverse, the first version at least. All we’re missing right now is reliable digital money…

“I think the internet is going to be one of the major forces for reducing the role of government. The one thing that’s missing, but that will soon be developed, is a reliable e-cash.” — Professor Milton Friedman in 1999.

In a decade from now Bitcoin and Ethereum will act like a slightly leveraged index fund. There won’t be any pump and dumps like in 2017.

Both will be an excellent hedge against inflation.

Governments will not allow this nonsense to explode again

If the government really had its crosshairs on crypto then 81 of the top 100 companies in the world wouldn’t be moving into blockchain.

According to research published by BlockData, of those 81 companies, 65 are actively developing blockchain products, while Microsoft, Amazon, Nvidia, J.P. Morgan, Walmart, Alibaba, PayPal, and Google are among the 27 companies with live blockchain projects.

While I understand the appeal of publishing “Bitcoin is dead” articles, anyone who brings up government regulation Fear Uncertainty and Doubt (FUD) is a dumbass.

If anyone brings up government regulation FUD in passing conversation just give them a snap, a wave, and flip your bangs angrily to one side.

The Federal Reserve is a Ponzi.

The speculative stock market is a Ponzi.

The fractional reserve banks are Ponzis.

Fiat money is a Ponzi.

Arguably, Bitcoin has more tangible backing than any of these with its Proof-of-Work (PoW) system which has concrete value and the watts required to validate a transaction on the network.

It’s absolutely necessary (and it’s blown out of proportion).

As one of my favorite rappers, Kanye West, pointed out this week, of course, we need people building real-world shit. Real-world clothes. Real-world shelter. All of that.

However, while the financial and internet framework being built by cryptocurrency offers no immediate value, the long-term value is immense. In closing, yes, Dogecoin is the future of finance. Fight me. You won’t.