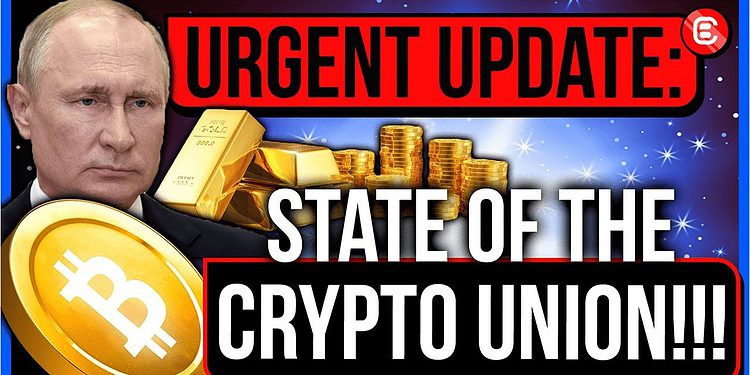 Where are we, what’s happening, and what can we expect?

The “Vladimir Putin indicator” has been flashing bearish signals since November, when tensions began to mount with Ukraine.

The “Vladimir Putin indicator” has been flashing bearish signals since November, when tensions began to mount with Ukraine. Yesterday, he upped the ante, signing a decree which recognized the separatist Ukrainian regions of Donetsk and Luhansk as “independent”.

The news has further rattled crypto and global markets alike, with concerns that it could provide a pretext to mount a ground invasion in the coming days, weeks, or months. Indeed, small numbers of Russian troops appear to have already been deployed on “peacekeeping” missions in the Donetsk and Luhansk regions.

European leaders to pile on the sanctions

European leaders are set to respond with a raft of sanctions (the likes of which Russia would have anticipated, and duly priced in).

Nonetheless, the already ailing Russian economy is showing weakness, and suffering the highest daily drawdown since 2008.

How would a military conflict in Ukraine affect markets?

While conflicts have the potential to spiral out of control, we believe that the threat of a ground invasion (and subsequent geopolitical instability) is largely, if not entirely, priced into the markets: since no full-scale invasion has taken place, it is in the process of pricing in that reality and the ensuing political fallout.

Would it mean lights out for crypto and equities?

To best demonstrate how markets are forward looking, just check out this chart showing how the beginning of historical military conflicts tended to coincide with a bottoming structure.

However, let’s not assume that history will repeat itself. As Adam Cochrane pointed out, “the past is a guide, not a crystal ball”. Plus, what the above charts fail to show is how “the invasion of Afghanistan saw markets eventually fall lower, Vietnam nearly retraced, and none involved a potential land war in the EU during existing supply chain issues.”

We expected a pullback and a retest of the long-term down-trending resistance (now support) line. However, the retrace we’re seeing now is unlikely to be a routine technical maneuver. J0hnnyWoo’s suggestion that this is the “perfect retest” may be failing to take into account the very real macro factors at play.

The Crypto Fear and Greed Index is at 20 – extreme fear – but it could still fall further. Only a few weeks ago, it hit a low of 10. Meanwhile, sentiment on Crypto Twitter might as well be in the single digits. Respected trader CanteringClark has called a bear market, Benjamin Cowen may have flipped bearish, and Du Jun, the co-founder of Huobi, has predicted we are in the early stages of a bear market, and that bitcoin’s next bull market will not return until late 2024 to early 2025.

Still, we’re yet to see a long capitulation wick, the likes of which we’d usually expect, and which may yet be on the cards.

Could such a move take us down to the low thirties, or even the twenties?

Steel yourselves, people, for the inevitable smug tweets from Peter Schiff incoming over the next few days.

Gold is rallying, and silver is looking set to follow suit.

The gold 2.0 narrative has been central to bitcoin’s appeal as a long-term store of value. Right now, however, there’s a discrepancy between bitcoin and gold’s market performance. In fact, as CryptoBirb pointed out, the correlation has flipped negative, at least temporarily.

This is no cause for alarm. If anything, it’s to be expected. Bitcoin may have dramatically outperformed gold for over 13 years now, but when a crisis looms, the “safe-haven” asset with thousands of years behind it is likely to see an inflow of money from nervous investors.

There’s a question to consider though: What happens when gold becomes too expensive? It’s already approaching an all-time high. Well, investors might look to silver, which usually tracks gold (but lags slightly behind, as we’re seeing now). Then what if the negative correlation continues, and bitcoin is then extremely cheap in comparison? Investors will seek to hedge their bets (and chase far better returns) from precious metals. How long will this negative correlation continue remains to be seen, but Bitcoin could be the next to run once gold has had its moment in the sun.

It’s exactly what happened in March 2020 after the ‘Covid crash’. Gold ran, and Bitcoin followed.

Three Arrows Capital’s Zhu Su made the point that this is a global macro decline, and by no means a crypto-specific meltdown. In fact, it’s holding up surprisingly well compared to the NASDAQ, for example.

It’s not just holding up well in comparison, however, the correlation has actually flipped negative, as 20-year-old (today!) Will Clemente pointed out.

So, bitcoin is underperforming gold and outperforming tech stocks, and the negative correlation to both suggests that investors aren’t quite sure which of the two it should track. It’s quite plausible then, that the narrative will shift, and ‘bitcoin as a growth stock’ might lose out to the digital store of value proposition, which would see bitcoin re-correlate to gold as opposed to the NASDAQ.

Will rate hikes from the Federal Reserve (Fed) be the nail in the crypto coffin?

We’ve written at length about how hawkish monetary policy is already priced in, but here’s where things get interesting: How will the unfolding Ukraine crisis affect the Fed’s plans? Will quantitative tightening and as many as 7 incremental rate hikes be viable in light of the current situation?

Unforeseen events may have scuppered the Fed’s intended course of action.

According to J.P. Morgan (via @deltaone, aka Walter Bloomberg):

Meanwhile, stockfigures24 points out that the odds of a rate hike of 50 basis points by March are down from around 94% (just a week ago) to around 36% now.

You’d be forgiven for thinking that the Fear, Uncertainty and Doubt (FUD) and the macro uncertainty had triggered a wide sell-off, but clearly, that isn’t happening. The HODLers are staying true to their name, and it’s only the spinach-handed retail investors who are offloading their precious bitcoin.

That’s not speculation, it’s backed by the on-chain data:

The exchange on balances is reaching lows not seen since December 2018! In spite of everything that’s going on. Prices are dropping because there are few buyers, few sellers, and those who are capitulating are clearly offloading small positions. And Bitcoin Archive points out that illiquid supply continues its uptrend even as prices retrace: a good sign in otherwise difficult times!

The first bullish case for bitcoin involves an easing of geopolitical tensions, which causes investors to return to “risk-on” assets. The second bullish possibility is that, in the face of escalating tensions, bitcoin re-correlates with gold as a digital store of value. Finally, the bearish case is clear. We lose the low thirties and plunge into the twenties, with a sell-pressure even institutional buying can’t offset. We may be in a “bottoming zone” however. At the very least, we’re closer to a bottom than we are to the top, which means that now is the time to stick to your strategy. Dollar-cost average (DCA) into quality, and only quality. Should we drop further still, and significantly at that, your shitcoins may become an extinct species, never to live again. If you’re uncomfortable buying around these levels and have dry powder to deploy, be sure to set some low-ball bids to catch a possible capitulation wick! Keep calm, and carry on, because hard as it is to believe sometimes, this too shall pass: having a strategy means that when it does, you’ll have made the most of what was a fantastic buying opportunity.