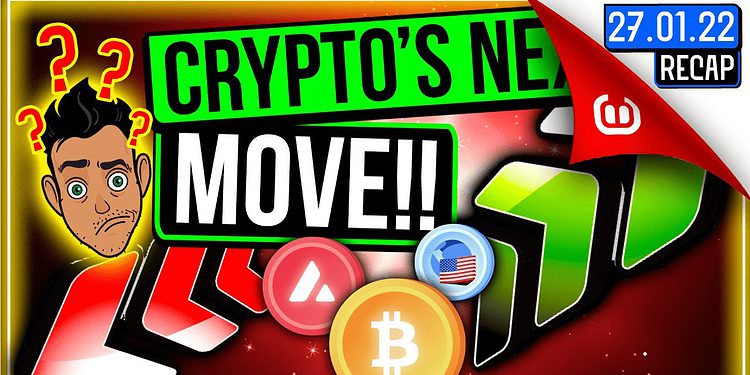 The best crypto strategy while Bitcoin decides its next move!

Yesterday, we went into the Fed meeting with expectations that they would acknowledge the nerves in the market. We also didn’t expect them to hike the rates until March. To nobody’s shock, we got exactly what we predicted.

We’re still wondering what the hell happened yesterday at the Fed meeting and on the show today, Ran talked about the drop following the question that was raised at the post FOMC meeting press conference. He also talked about what we need to do now.

Did the Fed just screw us over with the outcome of the meeting?

Yesterday, we went into the Fed meeting with expectations that they would acknowledge the nerves in the market. We also didn’t expect them to hike the rates until March. To nobody’s shock, we got exactly what we predicted. If that’s the case, why did the market respond the way they responded after the meeting?

Let’s take a look at how the Fed screwed us yesterday. We had expectations and we got them. The Fed issued a statement saying exactly what we predicted would happen. The markets were responding as predicted and everything was good. Then boom! Victoria Guida (a corespondent for Politico) asked a question at the press conference with Jerome Powell and everything went south. She asked whether Powell would characterize where we are at right now as maximum employment and if the Fed could raise rates and bring inflation under control without hurting jobs and wages.

Before this question, things were going as expected, and Powell’s tone was rather dovish. But at about one minute into Powell’s answer, things went haywire. Powell said he thinks there’s quite a bit of room to raise interest rates without threatening the labour market. This one statement made traders nervous and the whole market tumbled down. Bitcoin was at about US$39,000 but after that statement, we went all the way down to 36,000. Now we are kind of recovering. Ran thinks the market was having a ‘taper tantrum’ because the markets started to worry about how aggressively the Fed was going to raise interest rates.

We immediately saw that the market started to price a higher and more aggressive interest rate hike. Yesterday, we thought there was going to be a 25% basis point hike in interest rate in March. Now the market is saying there is a 16.3% probability that the Fed is going to start raising rates and they’ll go up by 50 basis points in the March meeting. Everyone thinks that by increasing the interest rates, the Fed will stop the economy and we’ll go into a bear market. But traditionally, that’s not really the case. If you look at the couple of periods when the Fed did tightenings, you’ll see that that’s the point where Bitcoin and the markets grew the most. So, it’s not the end of the world and the markets will continue – perhaps just not at an accelerated pace.

The issue is that the markets are now going to be looking for direction and the next time we’ll get any sort of direction from the Fed is in March. This means that the traditional market is going to continue looking for direction at least until March. So, we can expect the traditional market to largely move sideways in the absence of any other catalyst until March. And if that’s the case for Bitcoin, then we’re going to need some serious catalyst in crypto if we’re going to get any serious movement between now and March. The worst market is a sideways market where there’s nothing happening and we keep hovering around the same point. If you think about the traditional markets, for them, the sideways market is the worst because in periods of volatility, you can make lots of money, but when there’s no volatility, there’s no money to be made.

This is where crypto is different. Being in crypto, we are at an advantage because even when we are moving sideways or even going down, we still have the opportunity to make huge amounts of money. This means that we need to change our strategy slightly. Up until now, our strategy has been to buy the gems and ride them to the top. But given the possibility of a ‘crab market’, we need to take a different approach.

What strategy should we be employing now?

By changing the strategy, we mean that while the markets are looking for direction, you have to make sure that you’re following a very strict strategy. The first part of the strategy is that you need to have a buy list. And you have to switch all your shit coins to quality coins. Ask yourself whether the projects you are holding will make it if this bear trend goes on for a long period of time. If your answer is no, then it is time to switch into quality tokens/coins.

Second, you need to put the dollar cost average into all the dips. So, every time you see a dip, like when Bitcoin went down to US35K, dollar cost average in. The third strategy is to earn the maximum amount of yield that you can earn on all your alts. So, stake whatever you’re holding. Make sure that you’re maximising your portfolio. Because through the staking rewards, you’ll earn more tokens and when we get out of the market, you’ll have more tokens that you started with and then the price of the tokens will start moving up. So, instead of looking to buy new tokens, look to get more yield out of the projects that you love.

How can we make money while waiting for Bitcoin’s next move?

Ran brings  Gil Shpirman the founder of Donkey Finance onto the show; he spoke about the institutional adoption of Decentralized Finance (DeFi). He thinks institutions are looking for a combination of high DeFi returns and a level of security and returns. In this regard, Donkey Finance launched their first strategy that has insurance coverage. The more we see insurance protocols evolve and become more sophisticated in the DeFi world, the more we’re going to see institutional money coming in as well. Gil also spoke about how to farm on the Donkey platform to get maximum yield. The team is also well on their way to building more utility for the different staking tiers.

In terms of security, Gil said Donkey Finance doesn’t use decentralized contracts when it comes to the users’ funds. They are currently working with Fireblocks, the number one institutional custodian service, to secure the users’ funds. This also means that the farmers themselves don’t have access to the money. They just suggest the strategies that need to be executed and when.

Ran thinks the stablecoin farming phenomenon could become so big that it might slow down the growth of Bitcoin. This is because if people think that the markets are going to keep going sideways, then the wise thing to do would be to put their money into stablecoins and become farmers. You can become an expert in DeFi pretty quickly because it’s not as complicated as it seems. @Route2FI gave some useful DeFi advice.

First is to learn how to set up wallets and use several different wallets,  then get a hardware wallet. You should also learn how to bridge funds between networks like Polygon and Ethereum, because you’re going to be moving money around to get returns. Use burner wallets for new protocols and NFTs. And then you need to start learning things like impermanent loss, Annual Percentage Yield (APY) and Annual Percentage Rate (APR). When you start learning how these work, there are myriad of opportunities for you to make huge returns in crypto while waiting.

The most basic of these returns is Anchor Protocol. You can put your money into Anchor Protocol and start earning 19.46% on your money. There are also a whole lot of other strategies you can implement, but some of them involve impermanent loss. Miles Deutscher wrote an article on the Crypto Banter website where he walks you through the steps to earning 200% APY on UST and AVAX, and 82% APY on LUNA. If you don’t want the strategy where you can get impermanent loss, you can choose to stake stablecoins instead. Check out his thread that walks you through the step-by-step process.

Ran talked about another strategy using Platypus Finance. If you’re going to work with this strategy, go to Coingecko first and click the website link from there to avoid clicking on malicious links. On Platypus Finance, you can deposit your stablecoins and earn up to 24%. You can also buy PTP, and stake PTP together with a stablecoin to boost your yield.

First, let’s put it out there that Crypto Banter is hiring crypto degens as full-time and part-time researchers. This position is only open for residents of Cape Town, or those willing to move there. So, if you think you’re right for this job, please send a sample report to [email protected] to be considered.