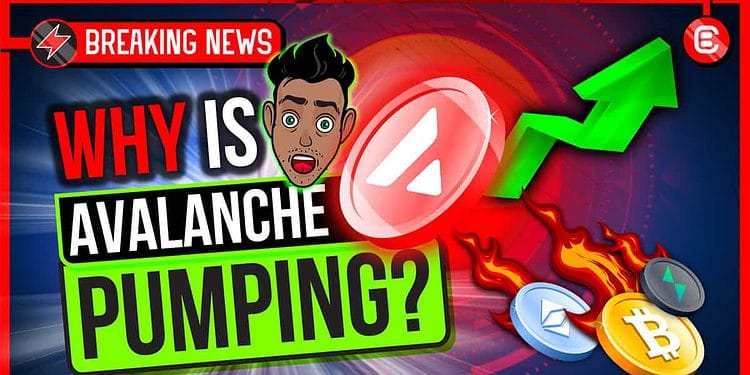 Why has Avalanche recovered so well?

What do we say? Follow the fundamental metrics to find profitable investments. AVAX’s successful recovery after the crash proves this theory. And how did it recover so well? Read all about it here.

In the days preceding the Federal Open Market Committee (FOMC) meeting, crypto markets were uneasy, but after Fed Chairman Jerome Powell’s address, crypto assets rallied. AVAX led the way among Layer-1 blockchain network native currencies, thanks to a confluence of rapidly-improving fundamentals. We like to call them “the metrics THAT MATTER!”.

In recent months, there has been a lot of talk about institutional demand for crypto assets.

BitGo, a cryptocurrency custody firm, announced on Thursday that it will support AVAX, in the latest hint of institutional interest in the fast-growing network. BitGo claims to manage over $64 billion in assets under custody.

The announcement comes after Bank of America stated in a research paper that Avalanche is a legitimate alternative to Ethereum for DeFi projects, NFTs, gaming, and other assets. Its potential to scale while being secure and decentralized was behind the decision.

According to the published note, Avalanche’s total value locked (TVL), or the value of tokens held in decentralized finance protocols, has increased by 21% month over month and by 6,255% since August.

Another reason for the recent AVAX spike is that investors were caught off guard by Avalanche’s success, and there is a rush to add it to their portfolios.

More than $100 million in token value was transferred between the two networks in the first three weeks after the Avalanche Bridge was created, as holders sought lower-fee venues to conduct their transactions.

The AB is said to be five times cheaper than the previous Avalanche-Ethereum Bridge (AEB) and to provide “a superior user experience than any cross-blockchain bridges launched to date”.

Avalanche is also a primary beneficiary of the Ethereum scaling narrative because the network is compatible with the Ethereum Virtual Machine (EVM). The EVM specifies the procedures for calculating a new valid state from one block to the next.

Avalanche ranks fifth in terms of total value of crypto assets committed to a blockchain’s multiple applications, with around $11.16 billion locked in, just behind Solana’s $11.72 billion.

The increasing value locked in protocols on the Avalanche network, which just crossed a TVL of $11.16 billion, demonstrates decentralized finance’s expansion there. Avalanche now holds 23% of the TVL share of non-Ethereum Layer-1 networks, up 42% in the last 30 days, eating more and more of BSC’s lunch every day.

Avalanche’s relative TVL share (the ratio of Level-1 TVL to ETH TVL) has increased by 32% in the last 30 days. Simultaneously, three of the top five coins – Binance Smart Chain, Fantom, and Polygon – have lost a combined 29%.

The 18 August announcement of Avalanche Rush, a $180 million liquidity mining incentive programme launched in collaboration with Aave and Curve, was one of the most significant developments. Avalanche Rush is designed to introduce more applications and assets to the Avalanche ecosystem.

Trader Joe (JOE), an Avalanche-based decentralized trading platform, is one of the top 13 DEXES with the lowest price to sales ratio, according to Cryptolaxy. This further proves that Defi on Avax is undervalued, and still holds potential for further upside, both in growth and price.

This month, the number of unique daily active addresses on Avalanche topped 100,000.

The number of transactions each day surpassed 700,000.

AVAX performed brilliantly during the latest market correction, even leading the market recovery. Follow the developers; they will bring the venture capitalists who will fund them to create dApps that will attract users and activities to the network. Finding lucrative investments has always been more effective when using real metrics. The increase in total value locked (TVL) was a strong sign that price would follow soon.

More Layer-1 infrastructures will be required as decentralized finance (DeFi) becomes more popular. Blockchain technology is developing, and there will be more breakthroughs in the future.