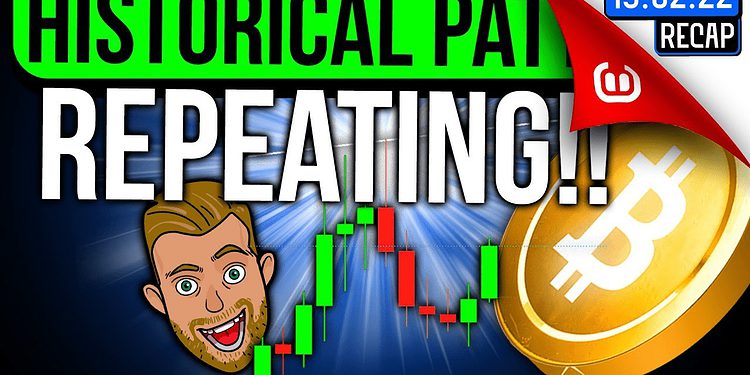 Why is a repeating historical Bitcoin pattern so important for the market?

Bitcoin has been steadily rising over the last few days, and over medium time frames, it has begun to create an inverse head and shoulders pattern.

Bitcoin has been steadily rising over the last few days, and over medium time frames, it has begun to create an inverse head and shoulders pattern. Although there is still a lack of activity in the market, as traders and investors, we should keep an eye on it for confirmation of a true breakout.

The $46,000 area has a lot of resistance, making it a difficult area for bulls to break through. It will be all systems go if we confirm a breakout above this level, meaning that shelved money should start re-entering at a rapid pace. Sheldon discussed the indicators you should be looking for and how to manage your risk in this critical area on today’s episode.

The state of the market

Bitcoin established a higher high, and then had a retreat which brilliantly held trend support. Bitcoin made a short-term breakout on a low time frame, and the uptrend has now continued.

Many expected the pullback to lead us lower, potentially below $40k, but the recovery occurred at the $41,000 mark, which was the previous high before the January breakdown.

Bitcoin may be far from its trend line support, but it isn’t necessary for the correction to reach the trend line before the market dynamics. A rather significant fact is that we saw a reset on the 4H, 8H, and 12H stochastic relative strength index (RSI), all of which were previously oversold.

Looking ahead, it’s also worth noting that we now have a higher low in play, with bulls attempting to retake higher levels as we approach the next resistance level around $45k, which has a lot of sell walls above it.

There aren’t many sell walls above the $46k resistance which might be broken with a short squeeze. Therefore Bitcoin could be on its way to the $54k – $58k range. Many short liquidations occurred earlier today, helping to push the price higher, and hinting at the possibility of a cascade of short liquidations.

Altcoins may have suffered greatly during the downturns, but we also know that when the market flips to the upside, they perform far better than Bitcoin, making it possible to make large profits and returns. Altcoins are now waiting for Bitcoin to break through the $46k resistance, which will restore confidence in the market, before going to the moon.

Bitcoin may be rising, but its dominance is diminishing, which means that altcoins are already doing somewhat better as investors anticipate Bitcoin breaking to the upside and restoring market trust.

The most ideal scenario is for Bitcoin to climb to above $54k, then go sideways and range for a while in order to re-establish market confidence, allowing altcoins to catch up and kill it in the long run. The main range is $54k to $58k. The next significant barrier is at the 0.618  Fibonacci level (golden ratio zone).

If Bitcoin breaks over $46k and rises to $54k, dominance might rise to 44%. However, if Bitcoin reaches a yield point where it gets a pullback and ranges where it’s holding $50k as support, we can look at what happened the previous time this happened, when dominance fell and liquidity streamed into altcoins.

Due to the Bitcoin rise, USDT dominance saw a retreat to ascending trend support. This was followed by a dead cat rebound, before the current pullback to the trend, which could finally collapse, indicating that investors are exiting stablecoins and entering the actual market.

The crypto total marketcap is ripping and showing strength, signaling that it’s about to have an upside rally from its current level just below resistance, thanks to the crash in stablecoin dominance.

A likely break out of the resistance might result in a strong run for the crypto total marketcap, which will then transition into the total 2 marketcap (excluding Bitcoin), which is still far away from the next big resistance. This implies that altcoins have a lot of room to run.

As the market tries to make a trend reversal, the charts suggest that Bitcoin is leading by example. This is something which normally happens before the rest of the market gets carried along.

Bitcoin was the one making higher highs, while altcoins trailed behind and were unable to do so before the market-wide slump. Many altcoins, including Ether (ETH), are on the verge of breaking through to new highs.

If Bitcoin does not ruin the party, Ether is on track to break higher, maybe taking it to the next zone in the $3,900 range.

Gala Games (GALA) had been declining for months until eventually breaking the trend with strength and volume. In shorter time frames, the token had another retrace as a result of the market pullback, but it has now broken the trend once more. Although, unless it suffers another correction, it is not a buy right now.

SuperFarm (SUPER) is another example of a coin which broke trend on longer time frames when the stochastic RSIs were entirely reset, indicating that it was oversold. On shorter time frames, the token has broken yet another trend and is poised to climb once more. Now isn’t a good time to buy, but it was somewhere about 80 cents.

Likewise, Anchor Protocol (ANC) had a string of down weeks, but it has finally reversed the trend to the positive.

Moonriver (MOVR) is another one, having broken trend last week and retested beautifully, while the reset RSIs have only now begun to take off. The token is a good investment.

Secret Network (SCRT) is projected to see a minor pullback and may fall to below $6.3, making it a good purchase. In the coming months, the token is predicted to moon pretty hard.

Theta token (THETA) has broken trend, retested, and is now breaking trend to the upside, making it a good buy. The network also has a big announcement with Samsung.

THORChain (RUNE) is still in the buying zone. The stochastic RSI for the 12H and 4H are both down, while the 8H has only recently begun to climb. A good buying level for RUNE is around $4.3.

Render token (RNDR) surged too soon and saw a dip before retesting the resistance trend line. The next retest will be at a lower level which is crucial to keep an eye on.

Fantom (FTM) is breaking out of a macro trend line, but it isn’t a recommended buy just yet, if you haven’t bought already.

NEAR Protocol (NEAR) is currently testing a significant support trend line and is advised if the macro resistance trend line is broken.

Similar to NEAR, Algorand (ALGO) is a smart buy as an investment or short-term trade.

Tezos (XTZ) is another recommended buy which is looking to break short-term trends.

The next few days will be unpredictable, but the prospects of an upside surge are increasing, with Bitcoin successfully leading by example and holding strong thanks to a probable ‘crisis hedge” narrative panning out.

You may have missed the boat on some cryptocurrencies, but some of the recommended buys listed above are worth investing in right now, because the charts reveal that they are lagging behind and that a catch-up is on the way.