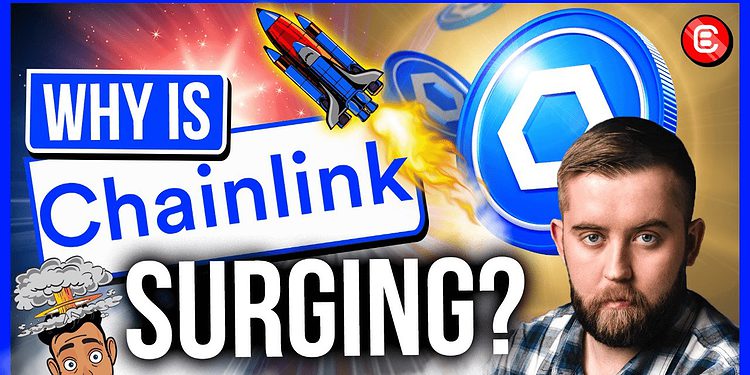 Why is Chainlink doing so well?

While the rest of the crypto market has been cooling off, LINK has been popping off and outperforming a lot of the market.

While the rest of the crypto market has been cooling off, LINK has been popping off and outperforming a lot of the market. While big moves when no one is looking may just be the new norm, is it a coincidence that 5 January saw Whale Stats revealing that an Ethereum whale dropped a whopping $4,693,000 on 200,000 LINK tokens? Could they know something we don’t?

A little background information on Chainlink

Chainlink is a decentralized oracle network that feeds real-world data to blockchain smart contracts. An oracle is a piece of middleware software that functions as a translator, converting data from the real world to smart contracts on the blockchain and back.

This means Chainlink has components that are both off-chain and on-chain. The off-chain Chainlink ecosystem is a network of oracle nodes that connect to real-world information sources, while the on-chain component is a set of smart contracts on the blockchain that allow developers to request data from the off-chain oracle nodes.

LINK is Chainlink’s native token, and it is used to pay oracle nodes for database services. They will ultimately be used for staking by oracle nodes to guarantee that data feeds are consistent and of high quality.

What does the Chainlink ecosystem do?

First off, it helps stablecoins to remain pegged to a price. Stablecoins are digital assets that strive to maintain a stable exchange rate against other currencies and assets such as the US dollar, cryptocurrencies, and precious metals. USDT and BUSD are two of the most popular stablecoins that trade at an equal ratio with the US dollar and are backed by cash assets in the bank.

So, where does Chainlink come in? As an oracle, Chainlink provides real time price data of the asset stablecoins are pegged to. This way, stablecoins are able to maintain the right price relative to their underlying asset.

Another thing Chainlink does is put the “De” in DeFi lending protocols. Decentralized finance (DeFi) allows anybody with an internet connection to borrow, lend, and earn interest on nearly any asset. This system of operation can leverage a decentralized oracle solution like Chainlink to acquire trustworthy market data. This means the system doesn’t need a central authority monitoring their collateral levels, interest rates, and currency values.

It also ensures yield farming with no loopholes. Yield farming involves putting your asset into a liquidity pool and getting interest on it after a period of time as a way to make some extra cash.

However, in the past, the price feeds have been used as a weak point to attack protocols that pool assets. If you can tamper with the data going into the pools, then you can affect how and where the money is distributed.

Chainlink is used by several DeFi protocols as a secure way to offer tamper-proof price feeds and track the value of deposits. This way, they can eliminate any attack through the price feed.

What is fueling the sudden price increase?

First let’s take a look back to 2020 and the big moves Chainlink has been making since. Currently, Chainlink provides 75 price feeds as well as over 300 smart contracts and decentralized apps. But, in terms of what Chainlink has accomplished, this is just a layer of the onion.

In August 2020, Chainlink launched its community awards program with the goal of promoting the growth of its ecosystem. Since then, Chainlink has funded 19 research and development projects, including funding for Chainlink integration on Tezos, NEAR Protocol, Solana, and Avalanche.

In September 2020, MakerDAO added LINK as a collateral option for issuing the DAI stablecoin, enhancing the token’s utility. Things became even more interesting when Bitgo, the company behind WBTC, the world’s largest wrapped Bitcoin currency, partnered up with Chainlink to offer proof of reserves in October 2020. As a result, users are now certain that the WBTC in circulation on the Ethereum blockchain is backed 1:1 by the Bitcoin held by Bitgo.

In October, there was a bolt from the blue when half a dozen DeFi protocols, including Compound Finance, Harvest Finance, Cheese Bank, and Acropolis, were all hit by flash loan attacks, resulting in the loss of over a hundred million dollars in cryptocurrency. This “attack” was literally just people taking flash loans to take advantage of arbitrage across different DEXs. And this was possible because these protocols were relying on centralized price feeds. Needless to say these protocols went running after Chainlink, leading to multiple adoptions between October and November 2021.

Now, after months of accumulating and barely bouncing off its moving average, LINK has jumped over 30% in a week, but what has caused such a rally when most coins are trying to stay alive?

Chainlink has been giving a lot of green lights to the bull lately.

Eric Schmidt, a renowned American software engineer and executive, has joined Chainlink’s advisory board. Schmidt served 10 years as the CEO of Google, and since 2011, he’s served in several other roles there as well. Such a big name in the game coming to Chainlink means a lot more is in store that we are yet to hear about – a sure sign it’s time for the bulls to jump into action.

If one sure sign of an incoming rally isn’t enough, Multi-Chain Capital announced a few days ago that the $MCC treasury dropped $400,000 on LINK tokens despite plenty of good deals on the market right now. Back in 2019 Multi-Chain Capital led the $20 million dollar investment round for Solana. Back then, Solana was trading for less than $1, but now, it’s worth over $130. Something is coming and the whales are always the first to know.

Whale movements and a former Google CEO coming onboard are never a coincidence. If there’s one lesson to learn from Banter, it’s to never look at the price. Chainlink is sure to have a lot more in store for 2022 than we realize. While the price may look high compared to a month ago, in six months’ time, the degens who bought today will be on vacation while we stare out of our office windows and daydream of the beach.

Most cryptocurrencies are off to a bumpy start in 2022, but Chainlink and other coins making moves in the market like popcorn in a pan are sure signs that we are in store for a crypto renaissance when the world markets get ahold of themselves and big money comes off the sidelines. The last bull rally for LINK led to a 2000% return before profit takers called it quits.

Keep your eyes on LINK this year as a lot of projects challenge Bitcoin for dominance and new projects are to be battle-tested during these volatile conditions. Remember, winners are made in the worst market conditions, not the best, and this sleeping giant is already a reminder of exactly that.