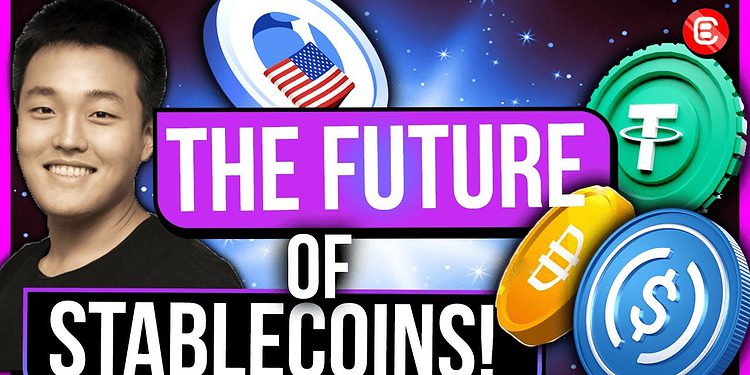 A stroll down stablecoins

First, we must understand that stablecoins are the most traded asset in the cryptocurrency space.

This is a reedit from a section in my 2022 Investment Thesis, none of this should be taken as investment advice–

First, we must understand that stablecoins are the most traded asset in the cryptocurrency space. “According to the data, the stablecoin sector grew by 388% from $29 billion at the start of the year to over $140 billion at the end of the year, representing a record high.” — Ajibola Akamo

With stablecoins becoming such a dominant part of the crypto industry, it is important to understand what you are using and why. Lest we forget, decentralization is one of the core principles of the crypto space. Right now, the biggest stablecoins are not decentralized. It’s so bad that Tether (USDT) can be frozen in your own wallet. Tether has a tendency of freezing assets, and even though I don’t approve of what many of these addresses have done (e.g. many DeFi hacks), freezing assets in your wallet defeats the purpose of “not your keys, not your coins”, since someone can always intervene.

If you want more, just Google “Tether freezes assets”. You can go down that rabbit hole. But I digress.

Tether has had lots of trouble in its past, as there are questions in regards to its backing and whether or not it could withstand a “run on the bank”. Currently sitting at around 78 billion in market capitalization, this is a lot to justify regarding its backing. In May 2021, we finally got access to information about the actual backing of tether.

Even though this is arguably more transparent backing than many central bank reserves across the world, it doesn’t calm fears that Tether functioning as an independent company could not withstand some form of run on the bank, as much of the backing is not “liquid”. This also makes it difficult for it to scale, as it would need to continue to secure backing in order to grow its treasury, and thus, its ability to print more tether.

Next in line is USDC (backed by Circle), which is currently at 49 billion in market capitalization. This is the most likely candidate to start incorporating KYC addresses in order to transfer and use USDC, as they are working closely with regulators in the US.

USDC has been slightly more transparent about their backing. In a recent US hearing, Circle CEO, Jeremy Allaire, stated: “Yes, I can confirm that 100% of the reserves that back USDC are held in cash and short-duration US Treasuries,”

Now, even though this is better than Tether, it still poses the risk of centralization and of regulation, especially by the US government.

Even with the recent statement by Jerome Powell, stating that CBDCs and privately issued stablecoins can coexist.

BUSD is the stablecoin used on Binance and the dominant stable on BSC (Binance Smart Chain), currently with a market cap of around 14.9 billion. BUSD, like the others mentioned, is also centrally controlled by Binance and subject to regulations. As Binance faces scrutiny from regulators, BUSD could also be affected.

BUSD has partnered with Paxos and is at least regularly audited. It is approved and regulated by the New York State Department of Financial Services. Claiming it is backed 1–1 by US Dollars or US Treasury bills. So, even with its centralization, it seems to be very transparent about its backing and holdings. More info here.

In 4th place sitting at around 11 billion in market capitalization is UST (terra). This is the top decentralized stablecoin currently, and it looks to remain that way, as Do Kwon has stated.

Many argue that this is a risky stablecoin. Since it is an algorithmic stablecoin, it has no “backing”, but the mechanism has proven to work, and it is decentralized. Following a proof-of-stake (PoS) mechanism through LUNA, all terra stablecoins are decentralized thanks to the Terra validators. To put it simply, burn LUNA → mint UST and vice-versa.

As the usage of UST grows across different chains and centralized exchanges (CEXs), users become comfortable using the stablecoin. This in turn helps with maintaining the stability of the peg.

In order to dispel any rumors about the backing of UST and how the mechanism might fail, Terraform Labs has initiated the Luna Foundation Guard (LFG) committed to developing a decentralized global economy. LFG looks to create some form of partial backing for the terra stablecoins, similar to projects like Frax.

Even though, to some, this might seem as an “admittance of failure” that their system doesn’t work, the move seems more in line with calming users’ doubts and generating more trust in the system. –give the people what they want–

Unlike backed stablecoins, scalability for an algorithmic stablecoin like UST is much easier since there is no worry about constantly having backing and storing that backing. Rather it’s a focus on adoption as adoption helps stability. UST has had impressive growth in 2021, starting the year at 185m market cap and finishing at 10B market cap, now around 11B at time of writing.

UST isn’t the only terra stablecoin. As products like Chai App grow, other stablecoins will also grow and contribute to the stability of the peg across different stable assets. The bet with Terra stablecoins is a bet on adoption.

Looking at risks, even though we had seen a depeg occur during the May crash, the peg was restored and the protocol proved to work. More recently, on January 27th, 2021 with the unwinding of the Abracadabra Degenbox strategy, and Alameda pulling out liquidity of a MIM curve pool, we saw another depeg on a low-liquidity UST curve pool. I covered it here, mentioning the disparity in liquidity. Judging a depeg on a low-liquidity pool that is less than 5% of the total market capitalization of the stablecoin does not accurately represent its functionality. Moving forwards, it will be important to track liquidity on the UST pair, and adoption across different networks and CEXs.

DAI is next. DAI is probably one of the older decentralized (not so much anymore) stablecoins, and it is brought to you by Maker Dao. Originally, DAI was backed by ETH, and it would maintain its peg through overcollateralized backing mechanics that MKR created. However, nowadays the treasury includes USDC and other centrally issued assets, which means it is not fully decentralized. According to data by Deribit, 40% of DAI collateral is made up of centrally issued assets such as WBTC, TUSD & PAX.

This seems to have moved away from the original idea behind DAI of having a decentralized stablecoin.

Moving forward it will be important to see if having these types of centrally issued collateral types will have an effect on the censorship of the token.

DAI is currently the most used coin in decentralized finance, or at least on Ethereum’s DeFi, though this might be changing as we have some big projects playing catch up. For now, DAI seems to remain the stablecoin of choice for ETH’s DeFi users.

I’ll talk about DAI’s biggest competitor next: MIM (Magic Internet Money). You have to love the play on words that the team has done when they developed Abracadabra, and the mechanism to mint MIM. Like DAI, MIM is a crypto-backed stablecoin. However, anyone can mint MIM across many different chains. MIM has become one of the first cross-chain native stablecoins. The backing mechanism for MIM is interesting, as it uses yield-bearing assets. So, whenever you mint MIM, you are essentially taking out a loan, but since your collateral is yield-bearing, your loan is getting paid off while it remains open. This whole mechanism is governed by SPELL, Abracadabra’s governance token. Staking Spell gives you access to a share of the revenue generated by the platform, unlike MakerDAO. It is important to note that due to recent events, some might think Daniele Sesta, the founder of Abracadabra, has too much power over the protocol. Just like many protocols in the early stages, it also has centralization problems.

There have been recent problems happening with MIM, and most importantly, the founder, as a “sister project” had one of its core contributors doxxed as a known scammer and thief. This has affected the public’s trust in all projects related to the “frog nation”, MIM briefly lost its peg, as there was an unwinding of leverage and participants paid back their loans.

According to Daniele, the founder of Abracadabra, this mechanism is made in such a way that the public would be incentivized to pay back their loans when MIM falls below backing because they would be getting a discount. This would, in turn, create buying pressure and restore the peg. Even with all the recent Fear, Uncertainty and Doubt (FUD) circulating, this mechanism appears to have worked, and participants were able to arbitrage back to peg.

Finally, I’d like to talk about FRAX. This is the first fractional-algorithmic stablecoin of which parts of its supply are backed by collateral, and parts of the supply are algorithmic. Similar to UST and LUNA, there are two tokens to be aware of here. Frax, the stablecoin, and FXS (Frax Shares), the governance token which accrues fees, seigniorage revenue, and excess collateral value.

Frax is still small compared to the aforementioned stables, with a market capitalization of around 1.8B, but I expect its growth to continue this year as there will be a migration to decentralized alternatives and as Frax begins to deploy on other chains. The main barriers on FRAX at the moment are that it is mainly on ETH, so the use of the stablecoin remains dependent on that chain. As cross-chain integration grows for FRAX, more people will have access to it and will be able to use the token.

With the recent events in the MIM-UST drama FXS seems to have benefitted as users sought out alternatives.

A notable mention is SILK and Shade protocol, a private stablecoin using the same mechanics as LUNA but with privacy built in.

Stablecoins will be a huge part of the years ahead, so do your own research (DYOR) and choose wisely — the stability of your portfolio depends on it. Regulation will play a big role in determining which stablecoins survive and how users interact with them. The usage of stablecoins will only continue to grow as the use of DeFi grows in countries around the world. Stablecoins will continue to be the backbone of many DeFi dApps, and will be used in many ways, from generating yield, to farming, to providing liquidity and trading. This asset class is often looked over for shinier things, but the US government is already making waves looking to regulate it.

Tying it all together, I cannot miss the Curve Wars. I’ll summarize: Curve is the best place for people to earn yield on their stablecoins. CRV (the governance token for Curve) is used to vote on which pools get the most rewards. Protocols have been hoarding CRV so that they can direct these rewards towards their users. Happy users → more total value locked (TVL); more use of your stablecoin → your protocol grows. It is important to have high liquidity in these curve pools, as we have seen in recent events, where a low liquidity pool made UST lose its peg, while the pools with high liquidity remained stable. Protocols need to incentivize liquidity in order to help stabilize their peg: more liquidity, more stability.

When choosing where to park your money away from volatility (in price vs the USD, but don’t get me started on inflation), it is important to take some things into consideration:

Answering these questions can help you conclude if you want exposure to that asset, especially a stable asset in times of volatility.

I hope this was enough to shine a light on the different options out there and how to choose your exposure.