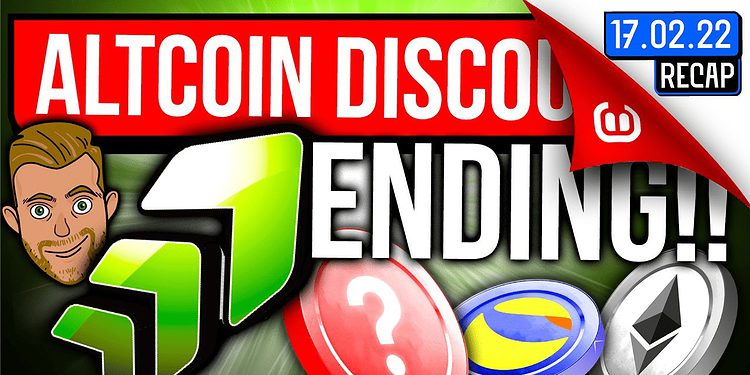 Altcoins are on sale (for a limited time). Which you should look to take advantage of?

When Bitcoin breaks out, the crypto market is likely to skyrocket, and altcoins, which have lagged behind in the upswing thus far, are in the best place to profit the most.

When Bitcoin breaks out, the crypto market is likely to skyrocket, and altcoins, which have lagged behind in the upswing thus far, are in the best place to profit the most. The area to break to the upside is $46,000, where bears are defending against the bulls, and big sell walls have been built.

Sheldon shared the top altcoins to monitor on our show today which might be the ultimate beneficiaries once Bitcoin breaks the trend to the upside! Never miss an episode of Crypto Banter by watching it live!

Bitcoin reached $45k once more, but we were unable to create a higher high, and we are now ranging with the primary support trend nearby. Before the last effort to retest resistance, the horizontal support held brilliantly, and Bitcoin could break much lower this time, following an ABC wave to retest the key trendline support.

The primary trendline support is the level to hold in order to keep the current bullish structure viable. It’s worth noting that at the time Bitcoin surged to $45k, the 4H Stochastic Relative Strength Index (StochRSI) was in the oversold range, indicating that a minor pullback was on the way.

Based on the current situation, which saw Bitcoin fail to recapture the higher high of $45k, this could indicate that Bitcoin is aiming to test lower lows (in comparison to the horizontal support it rebounded off), and will most likely be in the trendline support region.

Another lower high might emerge as a result of the higher high, higher low, and lower high sequence, resulting in a bull flag which would be more of a consolidation after the rebound from the lows before another rally.

The situation in which the trendline is retested will also form a flag, but it will be more of a downward wedge, similar to what happened in August 2021, where the trendline loses steam as it retests support before bouncing strongly. Both scenarios offer buying opportunities, particularly when the horizontal or trendline support levels are tested.

The $46k level remains the next significant hurdle Bitcoin must overcome, and with the RSIs bouncing from one extreme to the other as the market rises, a breakout is becoming more plausible as bulls seize control of the market.

The crypto marketcap has also finally closed above the long-standing downward trend resistance, and is currently retesting the trendline in the hopes of converting it from resistance to support.

What are we buying?

The best currencies to watch are those that have seen big drawdowns in a channel, similar to Bitcoin, and which are now breaking the trend to the upside.

You may have missed the boat on Tornado Cash (TORN) after the coin exploded once it broke the downtrend, but a retest is on the way, and you should try to profit from this between $33 and $34.

Ether (ETH) is also a decent buy between $2.7k and $2.85k. The coin, like Bitcoin, was in a downtrend until breaking out and establishing a higher high, indicating that it may be aiming to kill it.

Yesterday, we were expecting a support test on the Secret Network token (SCRT). It came close to touching it yesterday, and we’re heading there. The following leg down presents another opportunity to profit from SCRT at a price that is 5% below its current price, which is a support buy in the $6.2 – $6.3 range.

THORChain (RUNE) is a strong buy in the $4 to $4.5 range. The token has been on a tremendous decline, pushing the price extremely low, and the next leg up will result in massive gains. This isn’t something you’d trade, but rather something you’d put money into for the long haul.

TraderJOE (JOE) is still subdued in its long-term downtrend, although it has made multiple approaches to resistance, all of which have resulted in comparatively higher highs. If Bitcoin breaks through the $46k level, the JOE breakout will be enormous, comparable to that of Tornado Cash (TORN).

JOE is a solid buy between 90 cents and $1, as well as a later buy if the token breaks out of trend.

Fantom (FTM) is now not displaying much strength, resulting in a lower high, implying a lower low. The coin is still a long way from the primary support trendline, but it has the potential to reach $1.6. On the way down, dollar-cost averaging into the coin is recommended.

Cosmos (ATOM) produced a double bottom, broke trend and now looks poised to be on its way to $28 as it retests trend which is an excellent buying opportunity.

Solana (SOL), just like Fantom (FTM), is not exhibiting much strength at the moment and looks to be in the accumulation zone. The coin is a good buy in the $80 – $85 range, and the token will explode once the market recovers.

The Decentralized Options Exchange (DOPEX) is consolidating in a wide range of $1,400 to $2,000, with the obvious channel indicating that a breach of the $2,400 resistance level would be a confirmation buy.

Terra (LUNA) has made a strong comeback, but its support remains at $50. However, given the fact that the coin is a year-old long-term play, you can start dollar-cost averaging into it now or wait for another move down.

Ultra (UOS) is attracting a lot of attention right now. After smashing its higher high and now retesting the resistance as it attempts to turn it into support, you should start dollar-cost averaging because the coin appears to be ready to explode once (and if) Bitcoin breaks to the upside. However, there is a chance that it will return to the $1 region.

While the Immutable X (IMX) price is at support, the daily StochRSI is at the bottom. At its current low price of $2, the token is a no-brainer. However, caution should be exercised because this is not a long-term investment. Its market cap is $542 million, while its fully diluted market cap is $4.6 billion, implying that you are purchasing a good token at a high price level.

Arweave (AR) has a flat chart and is a bargain, considering that it’s the industry’s ultimate winner in the storage category. The coin has a fully diluted marketcap of $2 billion, and a marketcap of $1 billion, which is great since you know there won’t be too many token unlocks, and you won’t get crushed by other people’s tokens.

The market may appear to be too good to be true, but keep in mind that we’ve been in a decline for quite some time, and the trend reversal is similar to that of the summer of 2021. Be a cyclist, but don’t go against the grain!

While we wait for Bitcoin to make a decision, the future of most cryptocurrencies remains unknown. When the Bitcoin breakout occurs, the majority of the coins in a negative trend and on the verge of breaking out will be the first to rocket to the upside.

With the commencement of a new trend, you should work to improve your portfolio by stocking up on winners, especially coins that are ready to break to the upside, in order to maximize your winnings in the forthcoming rally.