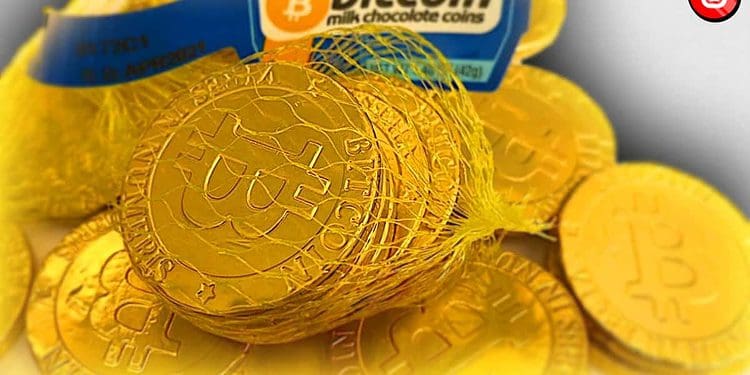 “If money is your hope for independence you will never have it. The only real security that a man will have in this world is a reserve of knowledge, experience, and ability” — Henry Ford.

“If money is your hope for independence you will never have it. The only real security that a man will have in this world is a reserve of knowledge, experience, and ability” — Henry Ford.

One of the best episodes of Crypto Banter I have seen was broadcast just a couple of days ago. It featured Michael Saylor, Mark Yusko and Anthony ‘The Mooch’ Scaramucci. All three are very prominent Bitcoin advocates.

I have nothing but respect for these men. They’re all brilliant in their own right. They, and people like them, are quite literally the only reason I, or any of us, have a crypto space to tinker around in.

Without these evangelists, Bitcoin would still be a novel experiment for computer dorks. In turn, without Bitcoin and the money that flowed in, there would be no crypto market as we know it today. I really do ❤ the BTC maxis.

I am reminded of the legal axiom that says “reasonable minds can differ”. I think myself reasonable and here I very much differ. Bitcoin is pretty cool. As money, however, it’s far from “perfect”.

The broad arguments of these guests were:

These I can agree with 100%. In fact, I wrote something very similar in an article from last November, where I said in part:

“If the current [monetary] system can hang around on life support for a few more years, they might just make it. But, if a particularly catastrophic financial event happens before they get there, the system may not recover this time.”

Or, the bulk of financial activity might just transition to crypto en masse while the central bankers try increasingly desperate measures to revive the legacy global economy.

If that happens, I fear banking and finance are going to be like the Wild West for a time, but I think things will eventually work themselves out.

I still dither on the “perfect” nature of Bitcoin. It is most certainly imperfect. Here’s why.

Bitcoin is decentralized! Yeah, so what?

My arguments against the idea of Bitcoin perfection are rooted in the following four, largely unaddressed risks with mass Bitcoin adoption:

Mr. Saylor argues that gold was an imperfect currency because:

All valid points. So, to those specific points, Bitcoin is only vulnerable to one — capture. In fact, the US government has routinely seized and captured bitcoin from any number of criminals, including the very recent, and high-profile case of this young lady and her beau.

With broad know your customer (KYC) mandates for US customers, unless you’ve been using virtual machines, virtual private networks (VPN), anonymizing networks and trading cash in person for crypto, you’re 100% on the map.

Aside from that, Bitcoin has a couple of other issues that I’ve yet to see addressed:

Not one of those things is hardened (in a military sense) in any appreciable manner anywhere. Yes, the Bitcoin algorithm is hardened and well proven.

BUT, the things that support the execution of that algorithm have so many wide-open attack vectors, I am actually more surprised that infrastructure attacks haven’t happened already.

If one knows where your mining rig is, all they need is a .22 rifle to cut your power by shooting out a transformer leading to your property. Or by taking a wire cutter and (maybe) a shovel or a ladder and severing your network access.

If one is really creative and hell bent on destruction, they could easily drive a van full of explosives into your parking lot. Someone did the same thing to a federal building in Oklahoma to devastating effect.

There is nothing stopping someone doing the same thing next to a server warehouse in an industrial park in Texas.

Well, gosh, who would do such a thing?

The sky is the limit really. One can never say what will put a bee in some nut job’s bonnet. Obviously, piecemeal attacks wouldn’t affect decentralized networks such as Bitcoin in any appreciable fashion.

But, as Mr. Yusko correctly identified in the interview, the normal course of business for disruptive technologies is for the soon-to-be displaced to fight. I don’t think the real fight has started yet.

Bitcoin mining in the USA is shut down overnight. That’s 35% of Bitcoin hash rate gone for the cost of a few FISA warrants and some scary letters/men in navy suits. Then, this letter goes out to US security partners and MOUs:

We have identified Bitcoin as a threat to US national security. Please help us shut down all Bitcoin mining networks in your country or we will cut off your access to banking.

Please and thank you,

No partnership with Uncle Sam, like Iran maybe? No problem. The US military is the world’s leading expert at finding decentralized resources and blowing them up. And they can do it all from an air-conditioned room in Nevada.

Of course, this probably won’t happen, but it could. If the 75% of Americans that don’t own crypto are standing in bread lines and are being fed a steady stream of anti-Bitcoin propaganda, the political winds can shift pretty fast.

Thing is, you don’t need to completely disable the network. You just have to hobble it. If the BTC market cap goes from US$1 trillion to US$10 trillion, and then the hash rate drops by 50% due to exogenous factors, I’m pretty sure that will be bearish for BTC.

While many a BTC hater will parrot some version of the “two percent hold 95% of BTC”, the truth is closer to two percent hold 70% of BTC. That’s better, but still not great. Here’s what it looks like:

It’s not clear to me how two percent of BTC network entities controlling 71% of BTC supply is “decentralized”. BTC is dispersed, but it seems to me to be very centralized among the same class of people that always end up in charge of the money — and in roughly the same percentage.

And as the Crypto Banter guests all seem to agree, institutional adoption is rapidly growing. Here’s what that looks like: 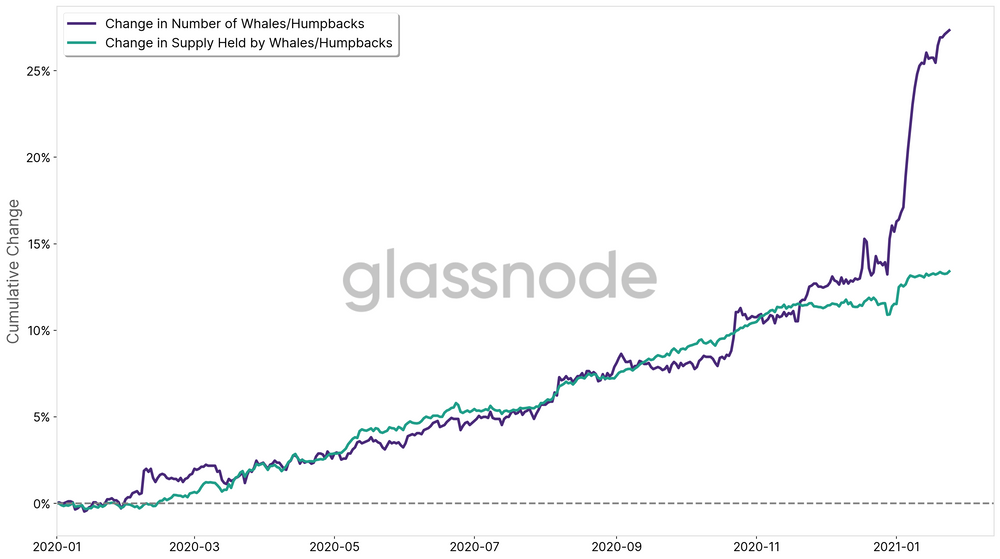 I absolutely agree that having an irresponsible sovereign issue and control 70% of the world reserve currency is a pretty terrible idea. The 18th-century economist, Richard Cantillon, very clearly demonstrated what happens under such a system.

But, at least the current global monetary sovereign has an in-principle constitution guaranteeing protection and the upholding of certain rights. The early adopters, bankers, and hedge funds soon jumping en masse into Bitcoin do not.

The point being, regardless of how smart they are (or are not), it’s not clear to me how shifting such enormous economic power to the private, for-profit sector is a net-benefit to society. At least now, those who wield the most influence in legacy finance have to make a show of petitioning the sovereign.

Put simply, do we really want the Winklevoss twins, or indeed Mr. Saylor himself, setting global economic policy? I don’t know them, they might be swell guys, but I’ll surely be damned if that starts to sound like a good idea.

Like it or not, gold has demonstrated value for nearly 10,000 years. It’s non-reactive, stable, infinitely recyclable and pretty darn cool to look at and hold. If you’ve never held a real gold coin, I’d recommend you give it a try.

I didn’t believe it until I held one for myself. There’s something about that metal that resonates with human beings on a deep level. In turn, mathematics are also incredibly valuable.

Everything that can be measured can be understood, generally speaking. There’s huge social value in that, but I’ll present you with a challenge. Go say the following to any teenager:

“Hey, if you wash my car, I’ll solve a really complex math problem that you can trade to someone else.”

Obviously, this is not going to be an effective motivator. If there were a market for those computations, that might sway the outcome. But the core “value” to the teen without such a market is zero.

“Hey, if you wash my car, I’ll give you one pure gold coin.”

10,000 years of human history has very reliably demonstrated that even in the absence of a formal market for gold, such a proposition has held motivational influence. It might not always work, but it has certainly worked more often than not.

Make no mistake, I’m not some gold-bug. I do, however, recognize gold has a recognizable, inherent value. Bitcoin does not. The bitcoin market is zero-sum. Remove all profits and losses and the result is zero.

To be fair, I suppose one could assign value to the computer and network hardware running the system. That certainly wouldn’t add up to US$1 trillion dollars. Not even close.

I very much believe crypto in general is going to be one of the most transformative innovations in human history. I also believe that, in the near-term, Bitcoin is absolutely going to be the primary driving force behind that.

But in that vein, we cannot allow or entertain the idea that Bitcoin somehow solves all the problems with money. It certainly changes them, some for the better, others likely for the worse.

From where I sit, a reasonable, rational and responsible goal for the crypto developers of the world is to create a system that:

That’s what a rational, intelligent, and responsible crypto reserve currency looks like to me. I think the blockchain can provide such a solution. I just don’t know how to do it, or I would.

My hope is that the Bitcoin evangelists see the same thing, because if not, I fear we’re all headed for a new financial mess that haphazardly replaces the current one. We won’t know the cost of that until long after we’ve paid it.

In short, we need to be really careful about how the crypto space develops, especially with money. What we do now is going to be financially determinative for generations.

We’d best get it right, because we might not get another chance.