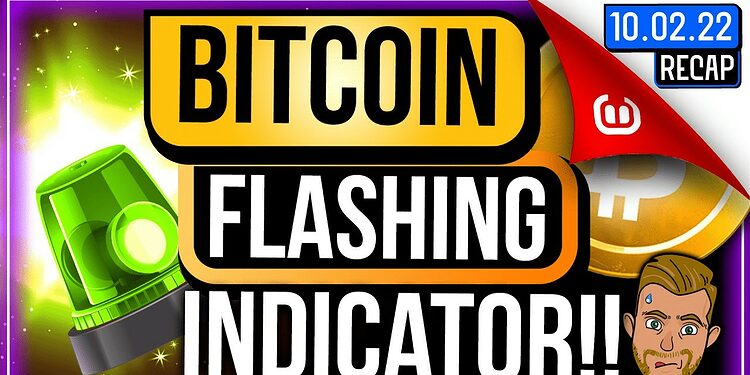 The release of today's inflation figures is expected to have a significant impact on Bitcoin's price. On smaller time frames, Bitcoin has begun to make higher highs and lower lows.

The release of today’s inflation figures is expected to have a significant impact on Bitcoin’s price. On smaller time frames, Bitcoin has begun to make higher highs and lower lows. But what about that flashing indication that we just got? Sheldon gives us a preview of what’s to come by looking at the charts on today’s show.

Human emotions are depicted on charts, and detecting breakouts and trends is the key to making money from chart analysis.

The cryptocurrency market has been in a downtrend since November 2021, but it’s the start of a new trend, now that the downward trend has finally been broken and a new cycle is on the horizon, although with some bumps along the way.

Bitcoin is breaking out of a great symmetrical triangle, and it is pursuing the recent high of $45k it set three days ago. The stochastic RSIs on both the 4H and 8H timeframes have been reset, and we are now trying to break out of a bullish wedge.

The next major resistance is at $46k, and after that is cleared, there is no notable resistance between $46k and $54k, making it simpler to recapture higher prices following the rapid steady downturn.

The market direction is becoming clearer, and we are primed for a move to the upside any time soon, with the USDT dominance right on support likely to collapse, signaling that investors are now eager to get out of the stables and deploy their money into the market.

The crypto total marketcap is breaking a negative trend, slowly but steadily following in the footsteps of Bitcoin, which implies that altcoins are finally receiving attention and being taken along for the ride.

However, the total 2 (excluding Bitcoin) and total 3 (excluding Bitcoin and Ethereum) market capitalizations are still well below their main resistance trend lines, indicating that they have not recovered in the same proportion that they plummeted. With Bitcoin’s dominance breaking down to the downside, a big altcoin catch-up is on the horizon.

The total 3 markets are on the verge of breaking out of a wedge, with the next big resistance positioned at around a $200-billion increase in market value, which is pretty substantial when you consider that Bitcoin and Ethereum are excluded.

The last time Bitcoin broke out of a downward trend like it has done now was in July, when it rallied nearly 45% before we saw any kind of retest. And in comparison to now (perspectives, doesn’t mean we’ll see the same price movement), Bitcoin has only done 25% from the bottom of the trend.

There will undoubtedly be a drop, but Bitcoin might reach $50k before the retest. If the inflation report is positive or neutral, it will act as a catalyst for a market rise, with Bitcoin leading the charge.

The prior main concern was determining whether the temporary top is at $45k, and whether we can expect a healthy pullback which will not invalidate any existing bullish structures, but it’s becoming increasingly likely that Bitcoin will reach a higher high before a retest.

What are the altcoins that are bucking the trend?

The altcoins that are now breaking the current trend are the ones to watch. There may be a pullback on the way, but there are a few cryptocurrencies that are exhibiting signals of going on a tremendous run any day now on shorter time frames.

The metaverse coins are spearheading the market rebound and Decentraland (MANA) is one of them. After a modest dip and ranging in a wedge, the coin has had a strong rally and appears to be prepared for another.

Another is GALA Games (GALA). This coin appears to be on the cusp of breaking out of a wedge formation rather than retesting its main resistance trend line turned support.

The Sandbox (SAND), like MANA, has had a good run, but it’s had a pullback. It’s still a long way from its major support trend line, and unless Bitcoin crashes, the coin is expected to keep rallying.

Theta token (THETA) has started to break trend against the USDT pair, after spending a long time in the accumulation zone against the BTC pair.

Solana (SOL) and Chainlink (LINK) show comparable pattern formations, and appear to be on the verge of a breakout. However, just because they have a similar shape does not indicate that they will all go crazy or that the market will.

Astroport token (ASTRO) is one of the coins to keep an eye on right now, as it has finally started to break trend after weeks of price declines. What’s more, the bounce appears to be accompanied by volume.

Another one to keep an eye on is the render token (RNDR). The token is approaching a strong resistance trend line that could take a few days to reach, and a break out of the trend could drive RNDR above $6.

Another asset you might consider adding to your portfolio is Secret Network (SCRT). This coin has had a nice cup-and-handle breakout, and a retest of horizontal support could be a smart buy.

Avalanche (AVAX) has had a better bounce than its contemporaries, and the coin is still poised to run much higher if it breaks clear of the significant resistance trend line it is now trading near.

If AVAX is rejected and pulls back, the $80 zone is a decent support purchase. However, a daily close over the major resistance trend line could push the coin to the $120 – $130 region.

The FTX token (FTT) has been in a downward trend for a long time, and it has been rather quiet while it retests its downward resistance trend line. The coin has rebounded back from its significant support zone and burst through its first horizontal resistances.

FTT is presently attempting to break through its downward resistance trend line and appears to be headed for the $65 – $75 range.

After retesting the channel lows, the NEAR protocol (NEAR) is looking to break out of a wedge. Due to the market’s wide plunge, the coin is down roughly 38% from its highs.

The invalidation points for the given recommendation can only be defined after the reversal trend has fully developed, and you should look to get out as soon as these coins lose momentum (drop trend line support) alongside Bitcoin to the downside.

Bitcoin’s decisiveness and direction will be influenced by the US inflation report for the previous month, which will be revealed tomorrow. It’s anticipated to come in lower than last month (below 7.3%), which could lead to a market surge.

The market has turned the corner and the reversal has started. This means it’s time to start buying, although you should proceed with caution. Some of the aforementioned coin suggestions are decent buys, but nothing is guaranteed. So, it’s best to wait for the inflation report and see how the market reacts before making any decisions.