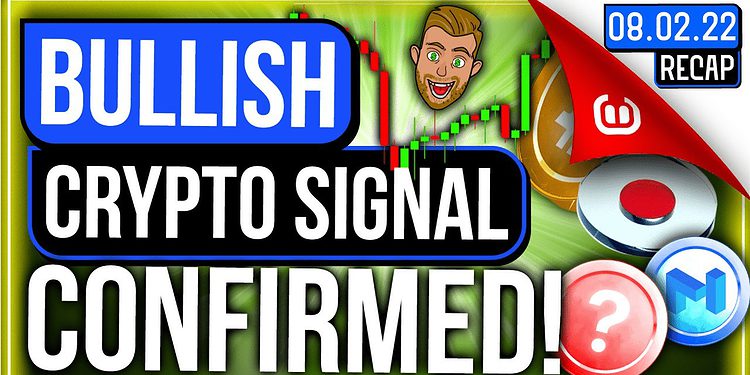 The case for a bullish cryptocurrency market has been confirmed

Bitcoin has just broken over a key resistance level, and altcoins are confirming bullish charting patterns across the board.

Bitcoin has just broken over a key resistance level, and altcoins are confirming bullish charting patterns across the board. The bulls are taking control and gaining traction, leaving the sidelined investors wondering if, and when, they will be able to re-enter the market.

With low time-frame momentum oscillators signaling we are in overbought levels, a pullback is imminent. Sheldon keeps track of his sniper levels to keep an eye on those pullbacks.

Bitcoin has performed exceptionally well in recent days, and we are now seeing a significant momentum shift from a nervous market in a downturn to an optimistic market as we move upward.

The big boys’ market strategy has always been to wipe off paper hands who capitulate during drawdowns, as we’ve discussed on the show, so that they can manipulate the market however they want with low volume.

After a long period of low volume activity, Bitcoin has finally broken a 90-day trend backed by volume and recaptured its first higher level, breaking past $45k.

The current trend reversal is similar in volume to the August – September 2021 break of trend, and the rally that propelled Bitcoin to a new all-time high without a lot of volume, leading us to believe that it should perform relatively well.

The market’s main concern was whether the comeback would be strong enough to take us up to other crucial resistance levels and beyond, and the recent price explosion has shown that Bitcoin still has a lot of ammunition in its arsenal.

The market has witnessed a significant recovery from the trend bottom around $33k, and there will almost certainly be a short-term decline at some point with the Relative Strength Index (RSI) showing that Bitcoin is currently in the overbought region on daily, 12H, 8H, and 4H time frames.

The key levels to watch for accumulation

The next step is to figure out how to take advantage of the upcoming micro-dip. The daily, 12H, 8H, and 4H time frames of the Relative Strength Index (RSI), which have revealed that the market is overbought, are the signal to watch when they reset in order to know when to stop buying when the pullback occurs.

Bitcoin is slamming into the rising trend line support, and it’s quite probable that it’ll contact these levels between $41,000 and $39,000, and hold as support before continuing on its trend reversal movement.

The weekly stochastic RSI has started to rise from its absolute bottom levels after being in an oversold position for a while. Bitcoin gained 130 percent in three months the previous time it started the current trend.

The $45k region cannot be the top because altcoins, unlike Bitcoin, have yet to hit a greater high as they try to catch up with Bitcoin. Ethereum may have broken out of the trend as well, but it has yet to break beyond $3,400, while Ether is currently hovering around $3,200.

Bitcoin’s dominance is choppy at the moment, swinging sideways as altcoins try to catch up. The required level of confidence is approaching Bitcoin, with breaking beyond $44,000 and setting a new high, perhaps causing a dominance crash and propelling altcoins to outperform Bitcoin.

With the recent price increase, the likelihood of Bitcoin ranging sideways for months has decreased because we now have a higher high in play, and the next action might be to construct a higher low before a continuation to the upside.

The slow growth of altcoins is nothing to be concerned about; it simply demonstrates that Bitcoin must be established above a certain level before the market gains enough confidence and whales begin to invest in altcoins.

The Sandbox (SAND) has reached the profit zone we predicted on the show a few days ago, and with a Bitcoin minor correction on the horizon, the rest of the market is expected to follow suit. SAND is once again a terrific buy around the $4 mark.

Decentraland (MANA) is a little odd because it’s practically vertical after an 86 percent increase, and the rising trend line support isn’t great, so it could fall. Between $2.5 and $2.7, MANA is a good deal.

Gala Games (GALA) might drop to around 24 cents, which would be quite interesting for long-term investors.

Chainlink (LINK) might yet move to $16, where it has a major support zone, which is an excellent place to invest.

Solana (SOL) is another sleeping monster, and when the currency reaches the primary support trend line as it approaches the completion of a wedge formation, a powerful reaction is expected.

Depending on market sentiment at the moment, Solana can yet increase 30% from present levels to hit the major trend line resistance before a strong breakout.

Cardano (ADA) is currently hovering around the key support zone, with a strong chance of dollar-cost averaging into the $1-$1.1 level.

Polkadot (DOT) is a strong buy around $18 as the stochastic RSIs reset and head to the bottom again.

Polygon (MATIC) had a big break out of trend yesterday, but it’s still anticipated to go back into its range, and possibly as low as $1.6, because it’s still a long way from reaching a new high (compared to the last one).

The Avalanche short-term take profits zone was struck with the price going all the way up to the resistance and getting rejected. AVAX might return to $72, which is a chance you should not pass up, because it is likely that enormous volume will come at the end of the wedge it is now in.

Render token (RNDR) was also rejected at resistance, and it could be on its way to $2.9 while the stochastic RSI is reset.

Terra (LUNA) did not see a significant increase during the market recovery, and is unlikely to experience a significant drop in the event of a minor market downturn. The recommended pricing point for LUNA is $50.

Tezos (XTZ) has been rejected at resistance after many days of surging to the upside, and is expected to pull back to the $3.4 level.

VeChain (VET) is approaching resistance, and a retracement to 5.5 cents is likely.

Cosmos (ATOM) has been holding up well, and is one of the few coins that weren’t hammered during the drawdown. Once ATOM reaches the major support line, it is expected to rally strongly.

The FTX token (FTT) is currently lying at resistance, and is unlikely to break through with its RSI at the top. A fall to the $38-$42 range is expected.

NEAR protocol (NEAR) is a trendy coin that you should include in your portfolio. Its RSI is at the top on shorter time frames and could reset anytime soon. The coin is a good deal around $11.

SuperFarm (SUPER) may have risen 100% in the last week, but it’s not a good idea to pursue pumps. The coin is a suggested buy at 26% below its current price around 80 cents when the market follows Bitcoin’s upcoming minor correction.

It’s uncertain which direction Bitcoin will go, but with stochastic RSIs reaching new highs in shorter time frames, a correction is likely on the way. If the important level of $41,000 is not held on retest, even though it’s expected to, the rally could end up being a dead cat bounce.

If you didn’t catch the relief bounce rally, now is the time to get ready for the market downturn. Make sure to invest in fundamentally sound coins such as SOL, LUNA, AVAX, ETH and others, as they will almost certainly lead the market back to health.