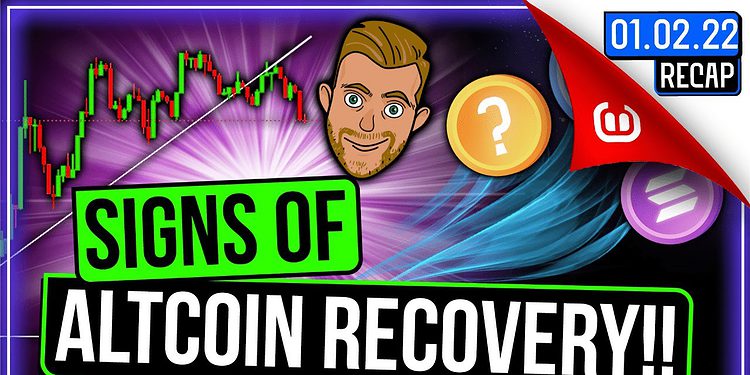 Is now a good time to invest in cryptocurrencies? As Bitcoin's dominance declines, altcoins are beginning to buck the trend.

Is now a good time to invest in cryptocurrencies? As Bitcoin’s dominance declines, altcoins are beginning to buck the trend. In today’s show, Sheldon discussed the altcoins he’s interested in, as well as his thoughts on whether or not this pump will last!

Bitcoin is currently attempting to break through the resistance of a downward trend that began in November 2021, and volatility is on the way!

Bitcoin has had a significant pullback every time it tested the channel resistance and has yet to reclaim higher highs, but we all know that nothing happens in a straight line, and we will break out of the channel at some point.

What we need to keep an eye on are the levels Bitcoin needs to recapture when it finally breaks out of the channel if we want to be sure the bull market will remain strong for the rest of the year.

However, if we fall below $30k, which would indicate a lower low, there will still be a reversal and break out of the downward channel, but the upside potential is limited, and a lower high (in comparison to the all-time high) is likely.

If the $33k price reached in the last week of January were to be the bottom for the trend, then a correction wave could bring Bitcoin back to the $50k – $55k region.

Bitcoin dominance has been following (but just broken!) trend and could be ready to drop hard. A Bitcoin price break through the $42k region – which will be enough to bring confidence back into the market –  could see dominance topping out and send altcoins skyward.

The total crypto market cap is also showing that the key level to break, when merged with the Bitcoin chart, is $42k.

A 12% – 14% growth in the total market cap could see altcoins recover at a very good pace as well.

Bitcoin is enjoying a steady bounce right now, and in the event that the lower time frame support is broken, it could easily retest the $33k region and possibly $30k.

Dominance is starting to show signs of reversal, meaning it’s still in favor of altcoins, even if Bitcoin runs.

The altcoins have taken a hit similar to the May drop, and as the Bitcoin dominance collapses, they will also recover faster.

Ethereum (ETH) is showing positive signs, though there is clearly not enough volume. ETH has two crucial resistance levels to break, one of which is the $2500 level it is currently sitting at, the other is in the $3100 range.

Taking the low recorded last month as the bottom, a correction wave could take ETH to the $3800 region.

Polygon (MATIC) has three resistances it has to break through – one of which is the flag formed in the last few days. A possible break could see MATIC test the first major resistance sitting at $2.

The next major resistance for MATIC is at $2.2, and a correction wave could take MATIC back to the $2.4 – $2.6 region. MATIC is one of the few major coins that has managed to hold onto a higher low (in comparison to the May correction) during this sell-off, and it’s weekly stochastic RSI has just bottomed out.

The MATIC monthly chart has had an extended wick down, showing the coin got snapped up and did not have a sell-off for too long. This is bullish!

Everyone wanted to buy AVAX when it was $140. Now it’s at $70, down more than 50% from its all-time high, they are being hesitant. Typical, huh? If Bitcoin breaks through the $42k region, AVAX can overcome the minor resistance it is currently close to and could easily shoot up to the $90 – $100 region.

Terra (LUNA) has had a good bounce from the golden ratio zone and is a good buy (long-term investment-wise) around the $35 region. Short term, it could easily rise by over 20% provided Bitcoin does its job.

Polkadot (DOT) got absolutely destroyed during this sell-off, but is now showing strength: it’s important to keep in mind that this is not the first time it suffered such a heavy pullback. It got smashed in the May 2021 crash as well, dropped by almost 80%, but then had a 350% rally afterwards.

Cardano (ADA) got completely destroyed during the sell-off (despite some significant sell offs before). It’s currently hovering around a major support and accumulation zone where it has been bought 14 times in the past year, showing that it is in a high-interest area for whales.

Fantom (FTM) has not suffered a huge pull back like the rest of its peers, and stands out for posting huge gains in the closing stages of  2021. However, should Bitcoin have another leg down, it could see a bigger drop compared to its contemporaries.

Chainlink (LINK) is not showing positive signs on shor-tterm time frames, but is currently hovering around a major support zone that has seen huge buys in the past (a good spot for long term investors).

The Sandbox (SAND) has broken trend and is retesting the support, which could see it go to the region of $3.7 (another good buying opportunity).

Solana (SOL) could make its way back to the $140 region if Bitcoin breaks above the $42k.

Decentraland (MANA) is up 10% from the call on the show yesterday and a good buy (if you missed the previous entry) if it drops back down to retest around the $2.5. Stop loss is at $2.3 for those who got in at yesterday’s entry price.

Spell token (SPELL) is waiting on Bitcoin to make a decision and Wonderland (TIME) is still in accumulation zone.

A lot of damage has already been done, but a possible leg down to test the lows of $30k should not deter you: we are in it for the long haul, and these corrections offer the best buying opportunities.

The aforementioned coins are all good short-term investments (provided Bitcoin holds up).

The top-tier, fundamentally sound tokens will weather the storm, so be ready to make serious moves when a reversal occurs. They may even lead the market recovery!