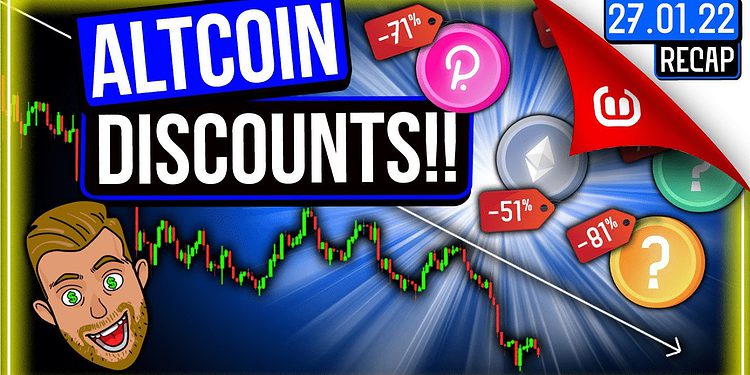 As Bitcoin continues to fall, discounts on altcoins are becoming increasingly enticing. If we're still in a bull market, which many feel we are, this is the point at which buyers become very interested in altcoins.

As Bitcoin continues to fall, discounts on altcoins are becoming increasingly enticing. If we’re still in a bull market, which many feel we are, this is the point at which buyers become very interested in altcoins. In our morning show, Sheldon discusses five fundamentally sound coins as well as areas to enter on the break of trend.

Bitcoin is indecisive at the moment, with no major price action move happening. There is no narrative in the air that could possibly serve as a catalyst for a bullish move.

The market has always repaid those who stick by the market during drawdowns, as evidenced by the past cycles and trends. This happens because quick money and traders who lack conviction get flushed out by whales who accumulate more at much lower prices.

The current downward trend is a reactionary and critical one that is testing traders’ conviction. Noobs capitulate because of fear, which allows the big folks to maneuver and load up.

As iterated on the show, if the $33k price range which was reached last weekend were to be the bottom, Bitcoin would need to break above the $42k resistance. The breakthrough will serve as confirmation that the bull market is alive and kicking, and Bitcoin could possibly be on its way to reclaiming its all-time high.

No one knows exactly where the low is, but looking forward, the key levels to reclaim to breathe confidence back into the market is the $42k level.

If Bitcoin drops as low as $29k, it will most likely not reclaim its all-time high, as it will continue in a head-and-shoulders pattern. The left shoulder and head will be virtually complete and the top of the right shoulder will be below its current all-time high of $69k.

Following the head-and-shoulder pattern, it might take a few months to complete the right shoulder. Taking profits along the way is recommended, because its high is limited, and the next leg down could take Bitcoin below $20k.

The fact that Bitcoin’s price is recovering faster than altcoins is behind the rise in Bitcoin dominance, which is currently at 43%. This is actually a good thing, because Bitcoin needs to give investors confidence before they begin to show more conviction in the broader crypto market.

However, the Bitcoin dominance is running out of steam as altcoins are catching up. If Bitcoin should break through the next resistance of $42k, dominance will most likely approach 45%, which will most likely be its peak before collapsing. That’s when altcoins will enjoy their ride.

The rallies are expected to happen in this order: Bitcoin to major altcoins to smaller altcoins.

Altcoins on massive discounts you should be aping into

The correction in the market has led to major altcoins – including the best ones – suffering a huge correction. This  is quite similar to what happened in the May 2021 crash, when most altcoins had a bigger drop than Bitcoin.

This discount as a result of the correction is a good buying opportunity for the better altcoins. It is expected to benefit coins like LUNA, AVAX, SOL, which in May 2021 ran over 1,000% each from their previous recorded lows.

The pullbacks are very similar percentage wise among top altcoins. Ethereum is down 52% from its all-time highs recorded in November 2021 (it had gone low as 60% in May 2021 from the then high which preceded a pump of nearly 200%). This means Ether could still get cheaper (but is already extremely cheap and is a good buy).

COTI was down 80% in May before a 700% rally, and is currently down 66%. This presents yet another buying opportunity, but be aware that it could still go lower (but is nearing a bottom).

Chainlink (LINK) has had a 60% and 72% correction within the last two years, both of which preceded 500% and 200% rallies respectively. LINK is currently down 65% and is another one to be on the lookout for.

The Sandbox (SAND) has experienced an 80% correction in the last two years before going on a 1400% rally. It is currently down 65%, presenting yet another buying opportunity. The token is a recommended buy around $2.2 – $2.4.

Cardano (ADA) had a 60% drawdown as a result of the May 2021 correction, but had a 200% rally afterwards. The coin is currently down 68%, and is now at similar levels to after the May 2021 crash. This is making it a high interest area for whales.

Avalanche (AVAX) is one most people missed. The coin was down 82% during the last market-wide crash, before it rallied a whopping 1,500%. The coin is currently down 63%, presenting a huge opportunity once again. Be aware that it could drop as low, percentage wise, as it did in the last crash.

IOTA is down 72%, and has a recurring pattern of pumping after a massive drop. This coin is another one to watch carefully.

THETA suffered one of the heaviest corrections in the market-wide crash of May 2021. The coin is down 84% from its all-time high recorded in April 2021, and is sitting at a major support zone, which has preceded huge gains in the past.

Polkadot (DOT) was down 75% prior to the July 2021 rally that saw most altcoins, including Bitcoin, begin their journey to reclaiming all-time highs. DOT pumped over 250%, broke its all-time high and set a new one In November 2021. The coin is currently down 70%, closing in on the levels it was at the last crash, and presenting yet another buying opportunity.

Terra (LUNA) had an 80% correction before it went on a 2,000% rally that saw it outperform its competitors leaving them in the dust. The coin is currently down 43% which is not cheap enough which next support zones sitting 12% and 25% below the current price.

The LUNA price experiencing as low a correction as 25% would be recreating the 80% correction it once had, which is an opportunity not to be missed.

Polygon (MATIC) has had 75% correction before, which preceded a 350% pump. It is currently down 47%, which may not be cheap enough for some, but is not bad either. The ideal entry level is about 30% below the current price, or the $1.2 range.

Fantom (FTM) previously experienced a 66% correction, and is down 36% currently, overheated, and is an ideal buy around $1.4.

It is not absolutely certain that these coins will chase their all-time highs again, with Bitcoin dictating the mood of the market. However, the charts show there are always huge gains to be made from these levels.

This is not the time to flee the market, but rather an opportunity to better understand how to approach it. Should Bitcoin go the head-and-shoulders pattern low of $29k, a lot of the aforementioned coins will suffer even more pull backs. They will then present the best buying opportunities, as they will be extremely cheap, and will be a relatively low risk investment.

It’s time to review your portfolio, make significant adjustments, and put your money into fundamentally strong projects.  AVAX, FTM, SOL, ETH and similar major altcoins can weather the storm, and are likely to emerge even stronger once the market regains enough confidence. They may even lead the rebound.