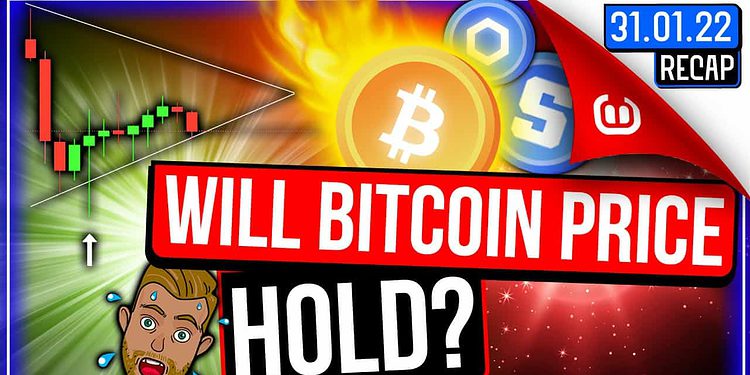 Bitcoin is in a clear downtrend and needs to break a 2-month long resistance line before making a convincing move to the upside. Meanwhile, the Relative Strength Index (RSI) suggests an impulse move could be incoming.

Bitcoin is in a clear downtrend and needs to break a 2-month long resistance line before making a convincing move to the upside. Meanwhile, the Relative Strength Index (RSI) suggests an impulse move could be incoming.

In today’s show, Sheldon took us through the top three indicators outlining where the Bitcoin might move next (and the key levels to watch before making a safe entry into the market).

Technically, Bitcoin is enjoying a modest bounce right now, but it’s got a job to do before we can all enjoy a collective sigh of relief.

As the above chart proves, the bears remain in control: the downtrending resistance line has been rejected at every approach so far!

We’re stuck in a range. It’s unexciting. And retail investors are losing interest. These moments of boredom can be when the unexpected swings take place, and given current market emotions, the next one could be to the downside. Until proven otherwise, we have to be prepared!

The downward trend (beginning back in November 2021) will be broken at some point. Lines are there to be breached. The question isn’t if, or when, but whether $33,000 was the bottom. Will BTC go on to print a lower low?

Glance across to the equity markets, we can see the US Wall Street 30 Index (US30) is back in trend having reclaimed support.

The S&P 500 is also showing strength, and after a strong push up, the kind of volatility spike we’ve not seen in a long time could occur imminently.

For the time being, there are two scenarios to consider: 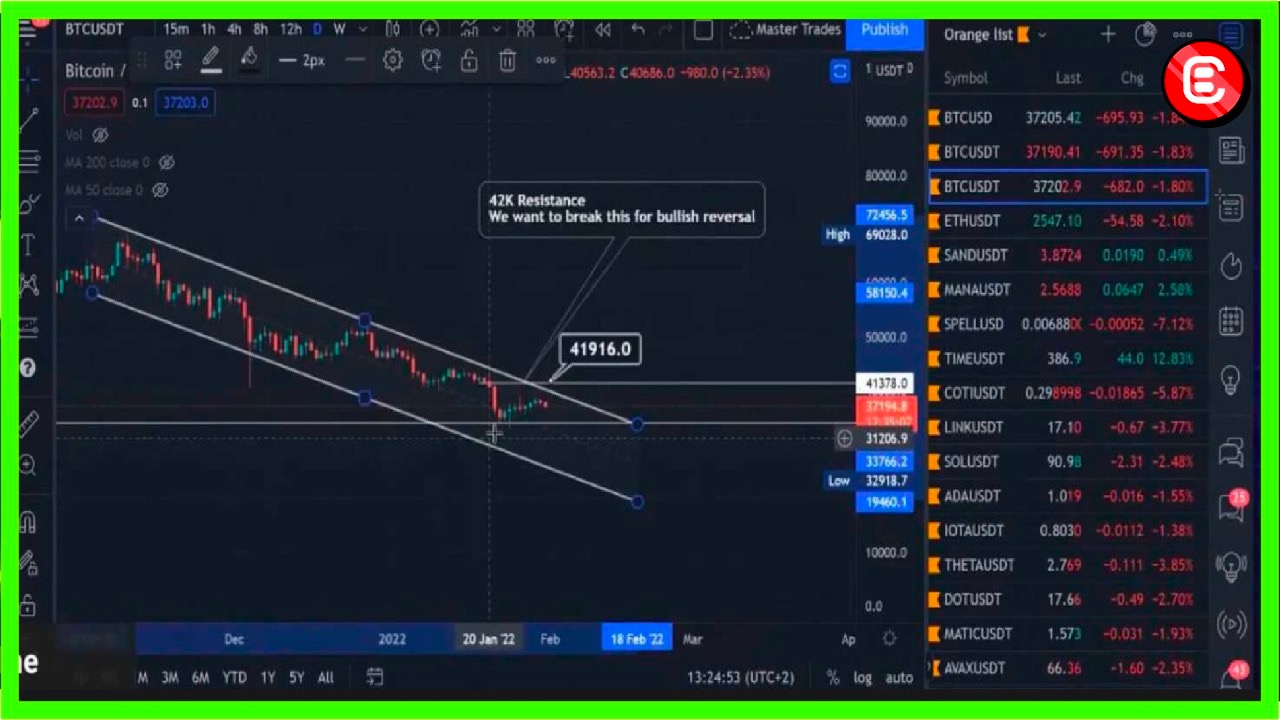 A break out of this channel could lead BTC to the $55,000 region, but before then, we also want to avoid forming a lower low (relative to July 2021).

Bitcoin dominance and the stance on altcoins

Altcoins have taken a hammering. Until confidence is restored to the markets, it seems unlikely that investors will deploy capital in altcoins, as long as BTC is showing relative strength. However, the tides could turn: Bitcoin dominance is approaching the key resistance zone in the 45% region. The question is: will it be rejected, or reclaimed?

Bitcoin dominance is unlikely to reach 50% again (crazy, right?), but should it reject the 45% region as per the above chart, it would likely return to the range lows. As a result, altcoins could expect a significant rally.

Interestingly, USDT dominance is currently reaching levels last seen during the May crash, implying that many investors are playing it safe, sitting in stables (maybe earning yield?) and waiting for the market to confirm direction.

But look back to May: when faith in the market was restored and money began to pour back in, USDT dominance crashed fast. Remember what happened next? Bitcoin rallied from $28,000 to $69,900 in only a few memorable months.

For now, altcoins are waiting for Bitcoin to establish direction: whether that’s up or down, they’ll aggressively follow suit.

As a long term investment, Ethereum (ETH) is a buy between $2000 and $2300: currently down more than 45%, the last time it saw a similar decline set the stage for a rally of over 200%. This is also true of some of the other large-cap alts with strong fundamentals.

The Sandbox (SAND) rebounded over 1000% after the previous market-wide correction. Of course, this was also precipitated by Facebook’s rebrand to Meta. SAND is currently down roughly 55 percent from all-time highs, but in the context of this ongoing metaverse hype, it’s also one of the tokens showing the most relative strength.

SAND is currently retesting the downtrending resistance line, and might easily break through $4 in the coming days. If SAND breaks trend, the next major resistance would be the golden ratio zone of $5.4, which is almost 40% higher than where it is now!

Decentraland (MANA) is another metaverse token showing relative strength. If MANA breaks trend and closes above $2.6, it could surge to $4-$4.2 – a 70 percent increase from current levels.

Although it’s a high-risk investment, SPELL could be a play here. It just broke a short-term resistance level, and if it holds, it could rally up to the top of the descending wedge: an increase of roughly 200%. As always, taking profit is key, and it’s recommended to do so along the way (especially after a 50% move, and beyond).

Wonderland (TIME) has taken a huge hit, but it is now trading in an accumulation zone (the huge sell-pressure having diminished). Fundamentally, the protocol (like SPELL) is going through a testing period. It’s high risk, but it could be the best possible time to buy. Even a rally to the short-term horizontal resistance level could mean a 150% move!

Theory is one thing, but learning through practice is the key: it’s a strange, difficult period, but don’t tune out. That’s what the whales want you to do! Instead, focus. Learn. Rebalance your portfolio where needed, ditch the shitcoins, and stay the course. With every challenge comes an opportunity: you might not realize it now, but by sticking around during the tough times, you’re preparing yourself for the good ones. There are few guarantees in crypto, but one thing’s for sure: the good times are coming. It’s simply a matter of when.