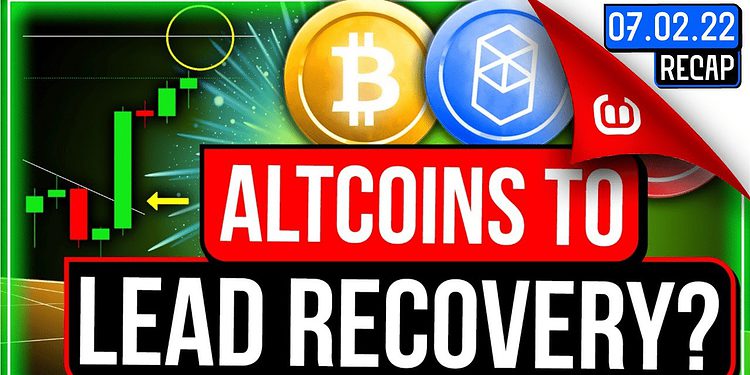 The top altcoins poised to lead the crypto market recovery, and the most crucial buy levels to keep an eye on

Bitcoin saw strong price action over the weekend and a very good weekly close that transitioned into the rest of the market as we enter a new phase.

Bitcoin saw strong price action over the weekend and a very good weekly close that transitioned into the rest of the market as we enter a new phase. On today’s show, Sheldon discusses which altcoins will lead the crypto rebound, as well as the most essential levels for Bitcoin to hold in order for the market to maintain its positive momentum.

Bitcoin’s key resistance has been tested a few times, all of which have been terrible, causing the market to become choppy and irritating for most traders. However, we know that the resistance weakens as it is tested more, and Bitcoin has finally broken through.

The major concern in the market right now, though, is whether the rebound will be sustained enough to take us up to other critical resistance levels and beyond.

Since the sell-off bottom around $33k, the market has seen a strong recovery, with Bitcoin and other major altcoins up between 30% and 50% from their lows.

There will probably be a short-term drop at some point, with the Relative Strength Index (RSI) showing Bitcoin is currently in the overbought region on low time frames. Chasing pumps is never recommended, so maybe taking advantage of the next micro-dip is worth considering.

Traders who are up significantly from their leverage levels will undoubtedly be taking profits as the market still lacks full confidence. If you missed out on the initial rally, you should be looking to capitalize on the next dip.

The key levels to keep an eye on

Bitcoin may have reached $43,000, but it wasn’t enough to reclaim a higher high (currently at $46,000). There was not much selling pressure between $39k and $40k, a level which Bitcoin easily broke through. However, there are a lot of sell walls just under $46k.

Bitcoin has successfully broken through the first obstacle at $40k, but it now needs to maintain its momentum and reach beyond $44k in the next 48 hours to keep the market in good shape, as the RSIs approach the oversold region.

On higher time frames, the weekly stochastic RSI is still an extremely oversold region, meaning that Bitcoin is in a high interest area for the big guys, and we are waiting for the bulls to take control. Although, the crypto market is correlated to the stock market in price movement, which could also determine the direction the crypto market will head.

If Bitcoin goes to $45k, there is a huge probability that it comes back down to retest support at $40k before having a continuation to the upside. However, if Bitcoin does not go to the $45k region, you shouldn’t back out, because this only means it will test a lower price range, possibly the trend line resistance turned support at $38k.

Even though the price is trending up, Bitcoin had a huge volume bar on the breakout and has had little since. This is just to demonstrate the big boy’s market play, where they get to move the market however they want with low volume, after many capitulated and got washed out during the drawdowns.

Shorts are covering their positions, and if Bitcoin rallies a thousand or two more, it might trigger a cascade of short liquidations, turning the market into a shitshow for the clusters of open shorts.

There are a lot of shorts orders sitting above $44k, and the liquidation of the cluster of shorts could be crucial for Bitcoin to break to the upside and drive a strong climb resulting in a short squeeze. Something we’ve seen before with rocketing price candles.

The market momentum has shifted and the dynamics are changing for the better, but we must exercise caution by considering alternative scenarios. With the RSIs rising again, now is not the time to rush into coins; instead, be patient and wait for a pullback.

The ETH/BTC chart, like that of Bitcoin dominance, has not yet taken a clear direction, and a sideways movement towards the major resistance trend line is showing strength from Ether. Should Bitcoin break through $46k, we will see a massive altcoin catch-up.

For the time being, the ETH/BTC pair is hovering just below resistance, as altcoins wait for Bitcoin to confirm the market’s direction.

The USDT’s dominance is retreating to test support, and a break of the support line would indicate that people are fleeing USDT and stables for the real market.

GALA has increased by approximately 100% in the last week, while UFO gaming has increased by 73%, Qredo by 63%, Altura by 41%, My Neighbor Alice by 41%, Phantasma by 41%, and SuperFarm and DeRace both by 50%. This demonstrates that metaverse coins are those that have recovered the most.

These are the coins which explode in value when the market goes bullish, indicating that they are interesting tokens to add to your portfolio. It’s just a matter of figuring out how to get into them and when to do so.

For SuperFarm (SUPER), it’s fairly straightforward. It has broken resistance, but the RSI is at high levels, indicating that a pullback is imminent.

If Bitcoin falls to retest support, SUPER will retest its resistance trend line turned support at $0.74. Although, if Bitcoin continues to rise, SUPER might rally to around $1.1.

GALA has had a powerful rally, shattering both the trend line and horizontal resistances, demonstrating its power and how strong it was coming out of the gates. However, following a week of about 100% gains, it’s far too high to buy right now.

Another buying opportunity exists around the $0.32 resistance trend line turned support, since the RSIs are oversold and a downturn is on the way.

Moonriver (MOVR) is still a bargain, having recently broken out of a downtrend and now trading sideways. Dollar-costing is a great way to get started with this coin, and whenever the RSI, currently at an all-time high, finds the bottom again, you can add more.

It’s unclear which way Bitcoin will go. It appears that we’re bidding the “boring” market farewell and that the bull market is back in full force. However, in order to reestablish market confidence, Bitcoin must hold the critical level of $41,000; else, this could be a farce.

It’s necessary to keep an eye on coins which are performing well during this rebound, and aim to buy them when Bitcoin retests support, as they will almost certainly lead the comeback. The coins that have yet to make a move in the metaverse are definitely worth looking into.