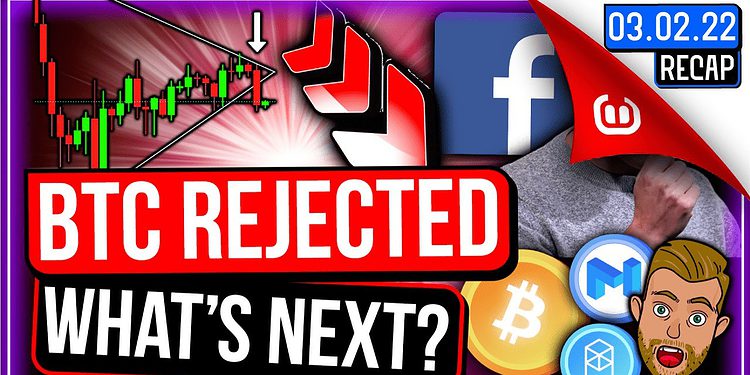 The worst-case scenario for Bitcoin after a failed breakthrough

The price of bitcoin has broken out of the symmetrical triangle, unfortunately (for some), it has done so to the downside. Sheldon examines both the best and worst case scenarios for how this could affect the Crypto market on today's show.

The price of bitcoin has broken out of the symmetrical triangle, unfortunately (for some), it has done so to the downside. Sheldon examines both the best and worst case scenarios for how this could affect the Crypto market on today’s show.

Bitcoin has made a decision, but it’s not the one we all hoped for. Not to worry though, that’s not too big a problem; we just need to keep our focus on the most critical level in order to properly prepare for what’s ahead.

The current falling market’s low of $33k was swiftly picked up, with an engulfing candle emerging on the charts as a result of the low being reached. We may have to retest the lows now that Bitcoin has lost support of the rising micro trend which has established since then.

The stock market has made a significant turnaround, and is now showing signs of resilience, having plummeted 20% since the beginning of the year and now being up more than 12% from its lows.

Due to investors’ similar feeling on financial markets, the crypto market has not totally dissociated from the traditional market, and the stock market sustaining bullish structures is bullish for the crypto market as well.

Major levels to be mindful of

It’s worth noting that prices in a specific location that get snapped up quickly (as evidenced by extended wicks on charts) are hotspots for institutional investors and whales.

Bitcoin price may have dropped, but the bullish structure will remain intact if it can retest the $34k – $35k region, implying that more whales’ orders have been executed and that the market can finally break out of trend.

The scenario in which Bitcoin breaks out of trend with strength, backed by volume, and smashes past the $42k level, recording the first higher high, is the first indicator signaling that we can still recapture the all-time high.

If we are unable to break the trend in the coming days, then the key resistance trend line remains in play and is critical resistance to break while there is no support trend: instead, horizontal support ranges at $33k, $28k, and $18k exist.

The most likely Bitcoin leg down will take it to the $28,500 – $31,000 zone, where it was purchased up numerous times during the last sell-off between May and July.

Bitcoin dominance has had a good day, but it’s only a sliver of a gain. It’s not producing the massive green bars it usually does, indicating that people aren’t panicking out of their altcoins just yet. This also implies that, when the market eventually goes full send, altcoins will outperform Bitcoin.

Ethereum dominance has broken out of its downward spiral and is displaying a lot of momentum. When the market turns around, Ether will be one of the most profitable coins, and it may even lead the altcoin recovery.

The USDT dominance is currently at its highs, where it usually ranges for a while. It could go as high as 5.2 percent, like it did during the May crash, while investors wait for the market to confirm direction.

The overall crypto market cap was rejected at the first significant resistance level after a market-wide slump, and it might return to the $1.5 trillion – $1.6 trillion region, wiping out more than $100 billion in cryptos.

Bitcoin may have broken out of the trend, but Ethereum has yet to do so, and is still holding on to its gains. If Bitcoin tests the $33k region again, ETH will fall to the $2200 – $2400 range. Ethereum, on the other hand, might fall below $2000 if Bitcoin tests further lows.

The Sandbox (SAND) broke out of the trend a few days ago. It is currently holding at the resistance trend line, which has now turned into support. If Bitcoin does not have a leg down, SAND might have a very strong rally.

Decentraland (MANA), like SAND, made a stunning breakthrough, and is currently retesting the old resistance as support.

Chainlink (LINK) may not be tempting in the near term, but it is a good long-term investment having recently returned to the entry zone.

Solana (SOL) is a nice buy around $90, but it may take another month or two before it sees another major increase.

Even though it isn’t surging, Cardano (ADA) is holding up well in the current downturn. It is currently in the accumulating phase of whales’ interest, and is still a fantastic long-term investment.

Polkadot (DOT) has seen a devastating sell-off, but it is showing signs of life once more. It’s currently trading at $18, and as a long-term investment, it’s a decent buy anywhere around the $17 mark. The primary resistance levels it’s shooting for are between 20% and 30% higher than present prices.

Polygon (MATIC) is looking fantastic right now, and if Bitcoin holds, it could be in for a run. Its next support zone is roughly 10% below current pricing, and major support is about 30% below current value.

Avalanche (AVAX) has not yet broken the trend, but it may do so if Bitcoin tests lower lows. The key support zone for AVAX is approximately $50 – $60, which offers good long-term investing prospects.

Should Bitcoin touch lower lows, Fantom (FTM) is starting to catch up with the rest of the market in this drop, and might go to $1.6 where its ascending trend line support is located.

After the Coinbase pump, Render token (RNDR) had a massive increase, and is a strong buy if it drops to $2.8, which is good for both short- and long-term investments. If the coin fails to return to $2.8, the next purchasing opportunity will be at a retest of the resistance trend line, provided it breaks out.

Terra (LUNA) was around $100 a few weeks ago, but has since dropped to $47, giving you another chance if you missed the initial pump. It is recommended to dollar-cost into the coin gradually, with the key support zone being between $35 and $40.

LUNA has a large margin to the resistance trend line, and it might easily retest as it tries to regain footing, making it a good short-term buy.

Despite the fearful situation of the market, Tezos (XTZ) is killing it right now, with a 30% gain in the last seven days. It’s not a good time to buy right now though; instead, wait until the coin is around $3 – $3.3. If the coin does not return to the given range, the next purchasing opportunity will be a retest of the resistance trend line if it breaks out.

Near Protocol (NEAR) has broken out of trend as a result of the market-wide pullback. After months of soaring parabolic, it went practically vertical in its retrace around two weeks ago.

At current levels, a reversal is predicted, albeit it may not last. NEAR is an excellent buy at $9, and if Bitcoin tests lower lows, where there will be a lot of blood in the streets, it would be a recommended buy at $8.

Even if there are a few more false market twists and turns, it is not recommended to sell right now, but you may control your risks by using tight stop losses. You can purchase more if the market goes down another leg, and if we break the resistance trend line, which would indicate that we are prepared for a rally, you can buy even more, provided you have some spare cash.