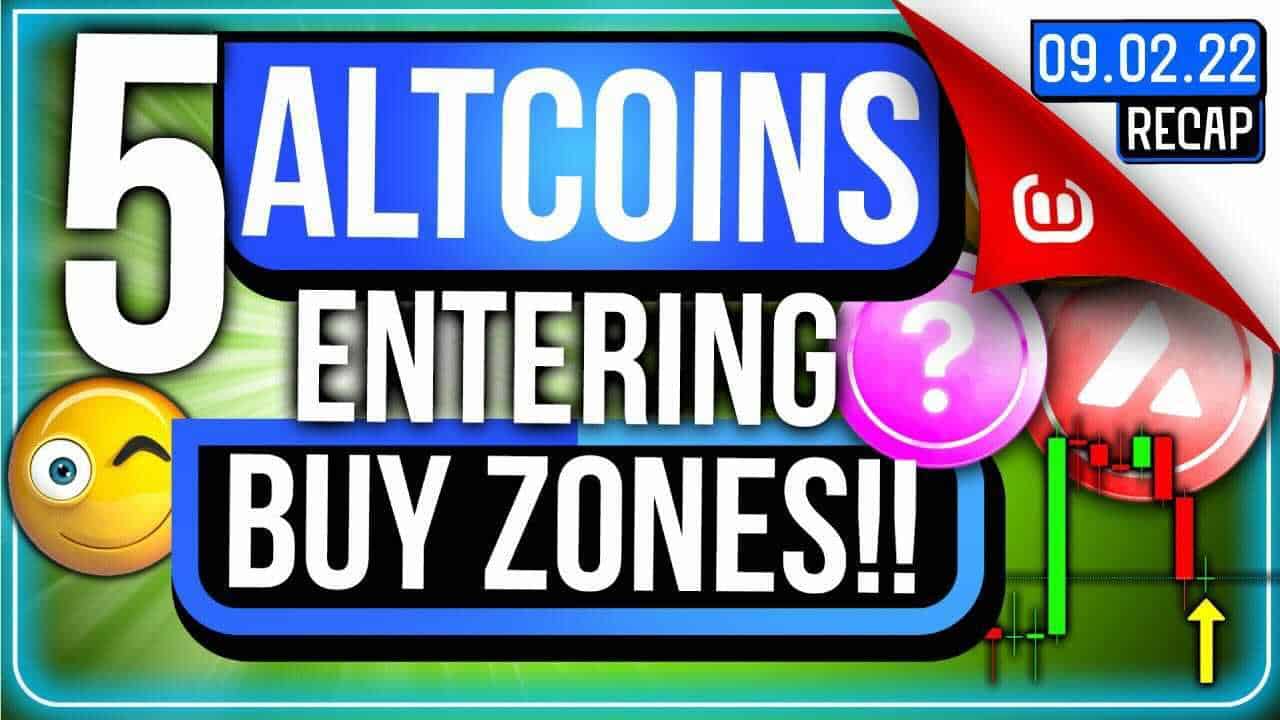 This is the ideal strategy to employ as the market retraces

The stochastic RSIs have achieved new highs on shorter time frames, indicating that a correction is on the way. The pullback has already begun and is expected to continue, with investors waiting to see if buyers would come in to establish a higher low.

The stochastic RSIs have achieved new highs on shorter time frames, indicating that a correction is on the way. The pullback has already begun and is expected to continue, with investors waiting to see if buyers would come in to establish a higher low.

On today’s show, Sheldon identified 5 altcoins that are entering their buy zones ahead of the impending decline, as well as the levels to watch and the invalidation points.

Bitcoin had fared remarkably well in previous days, reaching a new micro high of $45k before yesterday’s reversal candle. This small pullback was expected, and the Relative Strength Index (RSI), which shows that we are in an overbought region, is now being reset by the market.

The main concern right now is whether the temporary top is in, and whether we can expect a healthy pullback that will not invalidate the bullish structure that has already been established.

The head-and-shoulder pattern from the January trend is projected to play out, with the left shoulder and head already finished, and the right shoulder potentially sending Bitcoin to the $41k – $39k zone.

The most important levels to keep an eye on

Bitcoin may be trading sideways at present, but a complete reset of the Relative Strength Index (RSI) on the daily, 12H, 8H, and 4H time frames, which has shown that the market is overbought, could propel Bitcoin to around $40,000.

Bitcoin dominance is trying to break another trend to the lower side but is predicted to remain around while we wait for Bitcoin to make a move. In any case, Bitcoin’s dominance is projected to decline as altcoins catch up.

Bitcoin breaking through $45k and making a higher high is a solid sign that the next downturn will be a great opportunity to buy the dip, with Bitcoin projected to post a higher low before continuing to the upside.

The stock market is also in fantastic shape, with a lot of strength, indicating that bearish sentiment is unlikely to spread to the crypto market.

The BTC pairs should be evaluated to see how strong they are if we want to know which altcoins are best positioned to do well in the next market leg up.

Long-term daily trends against the Bitcoin pair have been broken by SuperFarm (SUPER). If SUPER pulls back to the support zone when Bitcoin’s RSIs are reset, the following resistance levels are 60%, 123% and 165% growth, respectively.

TraderJoe (JOE) has begun to break trends and has already made a higher high, while its RSI is heading lower as it exits the overbought zone. The current price decline is aiming to test lower lows. This will then lead to a return to the recent highs, which will act as resistance.

Theta token (THETA) had remained in the accumulation zone versus the BTC pair for quite some time. It has now trended back to the big support zone which preceded a massive price increase before.

Render token (RNDR) broke out against the BTC pair, and is now resting on the resistance trend line as support, suggesting that it could fall even more over time if it continues to follow the trend line.

On the USDT pair, however, RNDR is approaching its downward resistance trend line, which could take a few days to reach, and a probable break out of the trend could push RNDR beyond $6.

The USDT pair is indicating that RNDR is poised for a massive rebound, implying that it does not need to go lower, and that a trend reversal from here could see the currency outperform Bitcoin by 55%, 77% and 92% by testing past resistances.

Ethereum is anticipated to outperform Bitcoin in 2022, with more upside potential than Bitcoin. The current downward wedge in ETH/BTC could see it pump 44% and 72%, respectively, testing the next resistance levels.

Cardano hasn’t done much in a while, and it’s now in a buying zone in both USDT and BTC pairs. Since its new all-time high in September 2021, it has been on a prolonged downtrend with no significant trend reversal.

If ADA/BTC reverses direction and tests the next resistances, it might rise by 40%, 73% or 112% on the next high. ADA is also on the verge of breaching the USDT trend, and a reaction might easily push the coin to new heights. The current price range is an excellent zone for dollar-cost averaging.

Tezos (XTZ) is another cryptocurrency that is performing well against Bitcoin, and is poised to make a move in the coming days as it retests resistance. XTZ has already broken out of the trend against the USDT pair, and it may soon do likewise against the BTC pair.

The trend line may take a day or two to be broken, but the next resistance breach could send XTZ up to 27% and potentially 66% against Bitcoin to retest the resistances.

The invalidation point can only be determined once the reversal trend has fully developed, and you should cash out as soon as the currencies lose momentum (drop trend line support) against Bitcoin on the downside.

There is a laddering structure in place as coins are tested, with support and resistance levels being flipped, because the market works in cycles, and we all know by now that nothing moves in a straight line.

The US inflation report for the previous month, which will be released tomorrow, will have an impact on Bitcoin’s decisiveness and direction. The fact that stochastic RSIs are reaching new highs in shorter time frames alone indicates that the market will cool down for a day or two.

If the report and reactions are negative, Bitcoin must hold the $41k – $39k zone as support, and if all goes well, we may expect another leg to the upside in the market. To be on the safe side, you should place stop losses in your coins around the equal of the trend line support region just in case of a breakdown.