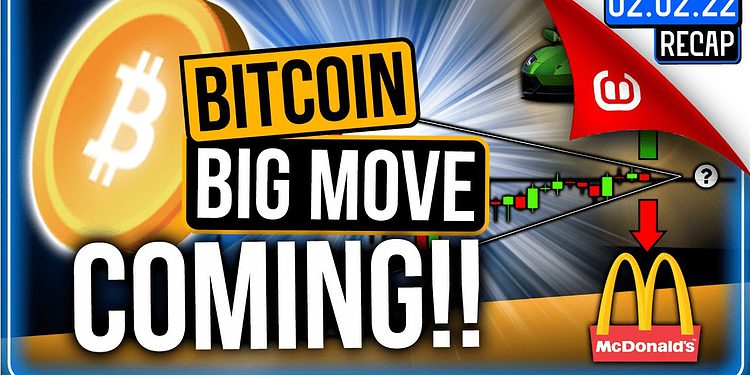 The Bitcoin price is currently trapped in a symmetrical triangle, and we need to break through this crucial resistance level in order to move higher.

The Bitcoin price is currently trapped in a symmetrical triangle, and we need to break through this crucial resistance level in order to move higher. Sheldon discusses two extremely crucial signs in today’s episode to assess which direction we’re more likely to go. What does this mean for the Altcoins, and which will be the first to bounce the hardest, if it’s to the upside?

It appears that Bitcoin is approaching a turning point, similar to traditional markets, which have fallen 20% since the beginning of the year and are now up 12% from their lows.

Investors, on the other hand, are selling overvalued tech companies and buying more stable industrial firms. The fact that, unlike the USTech100 and the S&P500, the Dow Jones Index has not broken any bullish structures supports this.

Bitcoin is at a pivotal moment, on the verge of making a major decision that will determine the market’s direction.

Bitcoin dominance crashing is good for altcoins in the long run because if Bitcoin breaks to the upside, altcoins will catch up faster, and if Bitcoin has a leg down, altcoins will not suffer as much of a pullback as they did the last time.

Bitcoin has been rejected every time it tries to retest the November bearish trendline resistance. The stochastic RSI is indicating that a likely leg down is in the cards, as Bitcoin falls when it reaches the current peak region.

RSI shows Bitcoin is overbought on smaller time frames after recovering and showing gains for consecutive days following the sell-off that saw Bitcoin go to $33k. Bitcoin now has a job to do, or we’ll be back to square one.

What’s more fascinating is Bitcoin hits trendline resistance before pulling back, and one thing we know for sure is that resistances weaken with time (much like support), so Bitcoin could ultimately break through this time.

If Bitcoin breaks through the $40,000 barrier, which has a lot of short sellers and is suppressing the price, it could easily break past the next key high resistance of $42k, causing a short squeeze and perhaps rocket Bitcoin to $46k.

The current scenario, in which Bitcoin hits resistance multiple times, is similar to September 2021, when Bitcoin retraced after a rise from July’s lows. A possible recurrence of this pattern, with Bitcoin displaying strength, may see Bitcoin break through resistance and soar to $55k in no time.

When Bitcoin’s market share fell below 40%, it grew by 50% from there, but as soon as it began to break down from the ascending support trendline, altcoins began to catch up.

Despite the fact that Bitcoin dominance only increased by 25% from previous low, it has begun to break down and is losing the ascending support trendline, implying that altcoins are about to become the hottest in the market (fundamental shift in momentum as well) and Bitcoin dominance might fall to as low as 30%.

If Bitcoin breaks beyond the key level of $42k, the total crypto market cap may easily rise to $2 trillion – $2.2 trillion. A likely breach of the whole crypto market cap’s key resistance trendline would signal a full reversal, bringing the market’s valuation to $2.5 trillion.

Polkadot (DOT) had a brutal sell-off, but it is again showing signs of life; the main resistance levels it is aiming for are between 20% and 30% higher than current pricing.

Polygon (MATIC) is hot right now after breaking out and producing a 4H bullish engulfing candle, and it could target the $2 resistance level soon.

ThorChain (RUNE) is an absolute steal at current prices of $4.1

Solana is right on a minor resistance level and looks to be headed into the $140 – $160 range.

Terra (LUNA) may not totally break out of its present downturn, but it will be one of the greatest gainers when the market turns around.

Right now, Oasis Network (ROSE) is killing it. It broke out of an accumulation zone wedge formation and is a solid buy guy on a retest around $33 – $34.

Even if there may be a few more phony market twists and turns, we feel the bull market is still alive and thriving. A lot of damage has already been done, but don’t let these faux hours deter you: we’re in it for the long run, and these corrections provide the ideal purchasing opportunities.

However, you should be cautiously bullish and keep your short-term stop losses updated in case the market takes a turn for the worst.