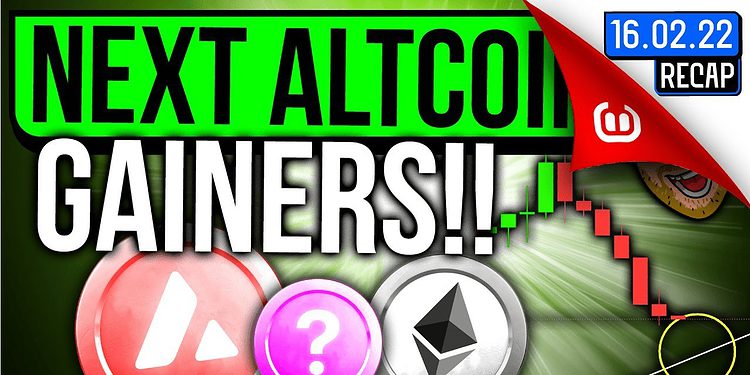 Top quality altcoins that are on the verge of exploding

Bitcoin dominance is declining, USDT dominance might collapse soon and these high-quality altcoins might erupt at any time.

Bitcoin dominance is declining, USDT dominance might collapse soon and these high-quality altcoins might erupt at any time. Sheldon’s charts are pointing to a massive inflow into numerous altcoins, and this could be the last chance to get in before the market explodes.

The state of the market

Due to the significant sell walls above it, Bitcoin is hovering at the current zone of $44k, which is beneath the big resistance around $46k. There are massive sell orders in the $44k-$45k range, which Bitcoin is holding up well against, and the fact we haven’t crashed is a positive sign.

Breaking through $46k is the next major obstacle, and Bitcoin might speed towards the $54k-$58k zone, which is the next major resistance. As long as we don’t make a higher high (going beyond $45k), a retest of trend line support is still possible.

Bitcoin now has a task ahead of it: breaking out of the present range and reaching a higher high. This will signal that it is ready to rally once more.

Besides today’s Chart of the day, USDT dominance chart is the other most important chart of the day, as the last time we were at this level, the market saw five months of money growth.

The rise in USDT dominance in recent months reflects the extremely aggressive bear market we’ve been in, but we’ve finally reached a point where the USDT dominance has retraced back to support, which is showing weakness, and might perhaps break the trend to the downside.

On the daily USDT dominance chart, a head-and-shoulder pattern has formed, sitting on trend line support and showing signs of weakness. With Bitcoin just below the sell walls, USDT dominance may have reached a dead end and could collapse soon, while the market explodes.

Right now, the key question is whether we will see a pump or a pullback to the $40k level. Well, it doesn’t really matter; what matters is that we know pullbacks provide buying opportunities, and we should take advantage of them if we encounter one first, before rebounding to the upside.

However, it appears that the worst is over, with Bitcoin forming an inverse head-and-shoulder pattern, which is the first retreat since we broke trend, similar to what we saw in August 2021 after Bitcoin broke trend in July 2021.

It’s also worth noting that, similar to August 2021, Bitcoin has made a higher high and had a retest. The next rally will determine whether this is the second higher high (candle close) which propels Bitcoin to new highs.

The best coins to look at are those that have experienced massive drawdowns in a channel similar to Bitcoin and are currently breaking the trend.

One of them is the FTX exchange token (FTT), which is a suitable safe-haven investment. After a recent breakout, the token is displaying amazing strength as it sits on the resistance which has now turned into support.

Avalanche (AVAX) is breaking a lovely trend that was previously rejected at resistance, and all it needs now is confirmation of direction from Bitcoin to go to the moon.

On the daily AVAX chart, the present pattern resembles an inverse head-and-shoulders, and it appears to be nearing the end of its correction. The weekly stochastic Relative Strength Index (RSI) has only recently begun to break higher, according to the weekly chart.

THORChain (RUNE) is another one that has broken out of its downward trend. It has returned to test the resistance that has now turned into support, with the potential to tear upwards once more.

As we anticipate Bitcoin’s next move, SuperFarm (SUPER) broke a downward trend beautifully, shot up, and made a good correction with a typical inverse head-and-shoulder pattern, and is looking to complete the right shoulder.

Moonriver (MOVR) is still hovering around the buy zone, and it made a higher high yesterday, indicating that it is about to reverse its downward trend.

After failing to reach a greater high, it’s possible that Secret Network (SCRT) will fall back down. The next leg down offers another opportunity to capitalize from SCRT.

Tornado Cash (TORN) is tearing through the market, with the token lately breaking out of a downtrend with gusto. It may retrace in order to test the prior barrier as support, which you should take advantage of.

This network is fundamentally sound as well, as it is one of the few privacy-focused transaction protocols which is also decentralized. Another advantage is that people are beginning to use it more frequently, and it is quickly gaining traction.

Platypus Finance (PTP) has had a string of days of downward movement since its initial public offering on markets, when it pumped a lot. The token has begun to recover and is now a good buy around the $3.4 mark.

After the Daniele Sesta (founder) debacle with his other projects, Popsicle Finance (ICE) has also seen several days of straight decline. The token is currently reviving and displaying some strength. The primary resistance and take profit zones for anyone getting into the coin today are $9 – $10.

Astroport (ASTRO) was launched hot, and the token is currently in a massive correction and accumulation period. It’s now attempting to recover, and what’s fascinating is that it’s doing so while experiencing volume surges.

Vader Protocol (VADER) has been in a downward wedge for a long time but is now looking to break out, despite still being hesitant while waiting for Bitcoin. This token is a high-risk investment, and if the trend continues, it might climb by 100% to 300%. Although the protocol has strong fundamentals, you should only take a small position.

JP Morgan in the metaverse

The largest bank in the United States has announced that it has opened a lounge in Decentraland, a virtual world based on blockchain technology, making it the first lender to enter the metaverse.

If JP Morgan, one of the most outspoken skeptics of cryptocurrencies and blockchain, is now in the metaverse, you should be too.

The Sandbox (SAND) and Decentraland (MANA) are the two biggest winners in the metaverse right now, and they’re both worth checking out.

Technically, The Sandbox (SAND) did not have a big bounce with Bitcoin, implying that its rise is weakening and that it may be headed back to the $4 range.

However, The Sandbox, it is a very safe option when it comes to investing in the metaverse because JP Morgan and Adidas have invested in it. If you want to fully degenerate and look at a well-established project that is still in the works, Wilder World (WILD) is the place to go.

Like most cryptocurrencies, the direction of Wilder World (WILD) is uncertain, and it’s waiting for Bitcoin to make a decision. The coin is now in a downward trend and could be one of the first to spike to the upside when the break happens, especially with the recent surge in volume.

The market may appear to be too easy and optimistic, but it’s important to remember that we’ve been in a downtrend for quite some time. The rally has only just begun!

However, it appears that the worst is over, and with a new trend just beginning, you should be looking to build your portfolio by doubling up on winners, particularly coins which are about to break to the upside, in order to maximize your gains in the next rally.