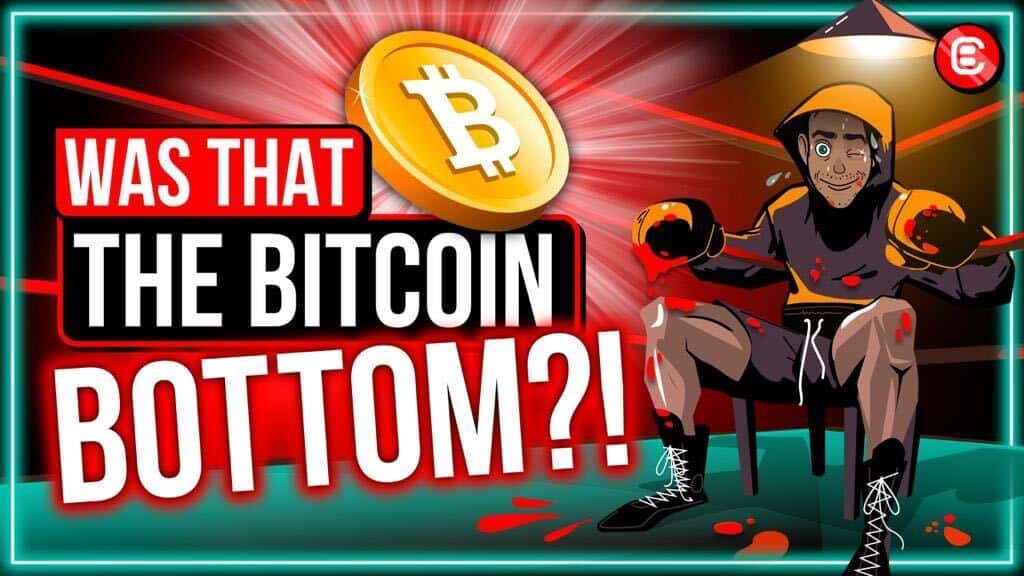 Let’s hope he was referring to the charts! Ahem.

During today’s morning show, he doubled down and took it one step further by saying the bottom was in!

Will Ran get shit on his fingers, or has he mastered the Midas touch?

Check out the difference in sentiment between today and January 2021. The Bitcoin price was identical, yet the fear and greed figures are polar opposites. What a difference a year makes!

People are fallible. Data doesn’t lie. Historically, extreme fear is far more likely to precede a rally, not a dump. And vice versa. Take a look at this chart plotting Fear and Greed with price action. You don’t need to be a sniper to see the obvious: Buying the blue here would have made you a down payment on a Lambo at the very least.

Human emotions aside, let’s have a look at some technicals.

Unfortunately, we aren’t still in 2014. If only we could teleport back and go all-in! Anyway, these days Bitcoin needs serious volume to shake off even a few of the bears out there.

We didn’t quite achieve a daily close above $42k (only 250 bucks shy – not bad!), but we certainly saw the beautiful pin-bar candle he was calling for – and with mega-volume. In fact, Sheldino was so excited he even annotated the volume bars with a raging tentino!

He wasn’t the only one getting all hot and sweaty though. Our good friend Scott Melker took some time off the golf course (more specifically, a bunker) to post this tweet highlighting what turned out to be the largest hourly volume candle since the December dump.

Yep, people are buying. At scale. And fast. You don’t see volume like that unless big fat wallets are swooping in to buy the dip! It’s exaaaactly what we want to see.

If that’s not enough for you, we have another volume-based indicator: Take a look at the 4-hour OBV, which can be used to gauge buy/sell pressure on any given asset.

As IncomeSharks points out, this sharp V-shaped bounce off a downtrending support line could suggest a reversal. We’ll just have to wait for a clear break of resistance and a daily close above $46k for meaningful confirmation.

As Sheldon showed us this morning, Bitcoin dominance has broken resistance after plummeting to levels not seen since May 2018 when Bitcoin took a beating at 39.27%.

Bitcoin doesn’t like to languish below or around 40%. Historically, it always goes on to correct itself. Will it reach the dominance levels we’ve seen in the past? No chance. But if we’ve found a bottom, the next move would likely see dominance climbing up to at least the mid 40% range as money pours in, whether that’s new capital or investors switching out of their alts to ride the wave. For now at least, it seems to have found a triple bottom.

But don’t just take our word for it: This very clever pooch (and shart enthusiast) spotted some bullish divergence playing out on the weekly.

You might think the recent dump would have flushed out the leverage, but open interest remains high as hell. Sure, it’s cooled off a smidgeon – but barely.

As the world’s brainiest kindergartner Will Clemente suggests, this is either because there’s sufficient demand at these levels, or the open interest is no longer only aggressive longs, but large clusters of shorts.

So we’ve covered some technicals and Ran’s call of a Bitcoin bottom sure has some compelling evidence to back it up. But as always there are other factors at play that could scupper the fun.

Calling a bottom is a high risk move. Calling a bottom the day before US inflation data comes out, even more so. But then Ran’s never been averse to putting his neck on the line, as evidenced by his apparent desire to become the next Enrique Iglesias.

Yep, the only thing tougher than Ran’s stubble right now is the US inflation crisis, and tomorrow we should get a sense of direction. For anyone out of the loop, check out yesterday’s article explaining what’s going on and what the Federal Reserve will do about it.

Many analysts are saying these figures are already priced in.

And Ellio’s probably right, but that’s assuming we don’t get any nasty surprises. Should the consumer price index (CPI) be above 7%, expect panic across all markets. On the flip side, if data were around or even below 6%, we can expect markets to surge across the board.

Ran has already made his prediction. He expects the CPI figures to come in lower than November’s dismal 6.8%.

Will he be proven out right? Fingers crossed he is.

We’re almost there, but one more thing. Let’s take a look at the US 10-year Treasury bonds.

Ran explained the breakout in yesterday’s show. In simple terms, it’s because people are freaked out by inflation and moving into safe (and boring) havens. What’s interesting however is the divergence playing out between the 10-year Treasury bond and BTC.

Hopium? Could be, but until proven otherwise, the trend is your friend, and as DanBTC916 suggests, divergence combined with bullish, on-chain conditions has historically spelled good news. As far as positive on-chain metrics go, how’s this for size?

It sure is heady stuff. Whether Ran’s call plays out, the important point is that despite (and because of!) extreme fear gripping the markets, the technicals and on-chain and macros all suggest that our fundamental thesis is intact. The bottom may be in, or Ran may get some shit on his hands. Either way, we’re pretty damn confident the top is yet to come!

Don’t be like Ran (and try to pick a bottom!). By all means, go for a beard if you’re able! Ultimately, calling a bottom isn’t necessary. What’s most important is identifying when it’s safe to deploy.

Right now, all the signs suggest even if we do go lower, it would unlikely be for long. In terms of the technicals, on-chain, and fundamentals, we’re seeing everything you’d hope for that could indicate an incoming reversal! Don’t worry about the exaaaaact bottom, focus on the range. Which means now might be a good time to start deploying some capital. Volume suggests that’s what the smart money is doing. And we’re here to swim with the whales!

But don’t just buy indiscriminately. You need a strategy. An investor (or trader) without a plan just plans to fail! Check out yesterday’s show to find out how to best position yourself for the next big move.